Calling all friends of parents, nurses, teachers, community volunteers, and other courageous do-gooders of San Luis Obispo County! Bluebird Salon is holding a “New Year, New You” contest on its Facebook page that aims to showcase all of the inspiring, hard-working members of our community who might otherwise go unnoticed. 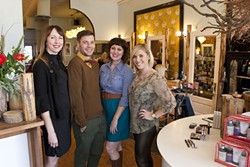 The winning nominee and his or her nominator will receive a new haircut, hair coloring, and a makeup makeover by the bubbly Bluebird stylists, followed by an outstanding dinner out, courtesy of Palazzo Giuseppe’s in San Luis Obispo. The winners will also be accompanied by photographer Shannon Lee, who has happily volunteered to take pictures of the event to make for a truly memorable day.

“We like to keep it interesting around the salon and we thought it would be a great way to kick off the New Year to give back to the community,” said salon owner Ariel Shannon. “It’s pretty encouraging to see how many people are doing amazing things that you never hear about. All the good that’s going on out there, it’s a good shift from the regular news.”

Nominations must be made on Bluebird Salon’s Facebook page (facebook.com/BluebirdSalon) no later than Jan. 31. Participants must tag the name of the person they are nominating along with reasons they deserve to be pampered for a day.

For anyone without access to Facebook, nominations can be written and submitted at the Bluebird Salon with the name and contact information of the nominee and nominator.

The winning nominee will be announced on Feb. 4 and contacted by the salon shortly after to make arrangements.

Bluebird Salon opened its doors in 2008—April will mark its five-year anniversary—and has offered its clients hair and makeup services using top-of-the-line products in a relaxing, professional environment.

Shannon welcomes all nominations, saying, “We’re excited to hear about the amazing individuals in our community that have made an impact in one way or another and deserve to be pampered.”

Outside of holding the contest, the Bluebird Salon partners with Outside Now, a nonprofit educational organization dedicated to getting people of all ages back into touch with the natural world. Shannon says that that giving back to the community is one of Bluebird’s core values, and she believes that this contest will allow people to find encouragement and happiness through the stories that are posted.

Several nominations can already be found on Bluebird’s Facebook page, filled with stories that will either make you smile from ear to ear or reach for the nearest box of tissues.

Shannon acknowledges that choosing the winner will indeed be difficult, based on the stories she’s already read. After the contest ends, Shannon, along with a few members of her team, will discuss and decide the winning nomination.

This is the first time the salon has held a contest like this, but with all of the encouraging stories of the community’s unsung heroes, she hopes to do it again next year.

“You would never know what some of these people are dealing with in their lives,” Shannon said. “And it also makes you grateful for what you have, and makes some of your struggles not seem as big.”

So whether you know someone who deserves to win, or just deserves some acknowledgement for the difference they have made in someone’s life, make sure you give them the attention they deserve and let them know how much you appreciate them by making a nomination.

Remember, all entries must be submitted by Jan. 31 on Bluebird Salon’s Facebook page, so make sure you get your nomination in and bring a smile to someone you care about today. For more information, call 593-0234.

The only thing better than supporting a good cause is laughing uncontrollably while you do it. On Jan. 26, four female entertainers will take the stage at the Cuesta Performing Arts Center for three hours of comedy, and proceeds from the event, Stand Up for Autism, will benefit the Central Coast Autism Spectrum Center. The nationally renowned comedians cover a wide range of subjects, from life as a single mom to the hilarious side of seedy bathhouses. Tickets cost $20 and can be purchased at standup.autismspectrumcenter.com. The evening starts at 5 p.m. with food, wine, and a raffle. The entertainment begins at 7 p.m.