Sharks are making a comeback on the Central Coast, and maybe that's a good thing

It should come as no surprise to anyone that there are sharks in the ocean—that’s where they live. But a recent uptick in local sightings, and a no-injury attack at Morro Bay in late August, has many ocean lovers feeling jittery about getting in the water. Cal Poly professor Ben Ruttenberg, who teaches marine ecology and marine conservation, said even he’s not immune to the fear.

“I’ve been out surfing the last couple days,” Ruttenberg said, “and I’ve definitely been looking over my shoulder. It’s like this primal fear, that we’re afraid to be prey for something.”

The reality, of course, is that shark attacks are rare events. Including the Aug. 29 incident, there have been nine confirmed attacks in SLO County since 1956. Two of those attacks were fatal, according to a report by the California Department of Fish and Wildlife, but such deaths are even more rare. Since 1957, only 13 people have died from shark attacks in the entire state. Chris Lowe, a CSU Long Beach marine biology professor and director of the CSULB Shark Lab, pointed out that the likelihood of dying in a car crash is far greater than the odds of being killed by a great white shark. 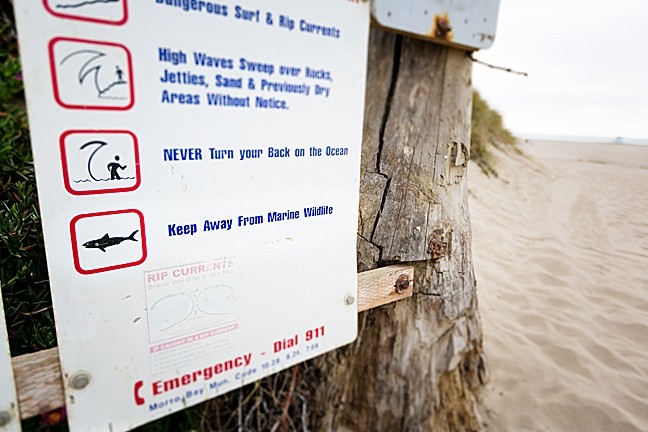 “You could strap a bleeding tuna to your back and go swimming,” Lowe said, “and you’re still probably more likely to die in a car accident on the way to the beach.”

That doesn’t mean swimming in the ocean is a no-risk activity—sharks are predators, and the ocean is their wilderness environment. When drone footage in August showed a 9- to 10-foot shark nonchalantly swimming near a group of oblivious surfers at Pismo, it highlighted what we all knew already: The sharks are out there; they are probably closer than you think, but ignorance is bliss.

There have been half a dozen sightings around the county since then. The fact is that the frequency of human shark interactions is on the rise, and it will probably continue to rise. The number of adult and sub-adult sharks off the coast of California is thought to be an order of magnitude larger than it was a generation ago.

Great white sharks gained protected status in California during the 1990s, when their population was thought to be fewer than 300 sharks. A 2011 study by researchers at UC Davis and Stanford, estimated that there might be as few as 220 adult and sub-adult great whites off the coast of California. Poor water quality, along with over-fishing, struggling marine mammal populations, and hunting of sharks are some of the factors that contributed to such a critically low population. In that context, the rebounding shark population is a positive phenomenon. It means more food and resources exist at every trophic level leading up to the apex predator, the shark.

“It’s the recovery of those things that allowed white sharks to come back,” Lowe said.

Last year, Lowe and other marine researchers released a white shark population study that estimated the number of sharks off California’s coast was 2,400 or more.

The other population boom, according to Lowe, is the growing number of people who use the ocean for recreation. The International Surfing Association estimated that there were 26 million surfers worldwide in 2000. By 2014, the ISA estimated there were 35 million surfers worldwide. That doesn’t account for kayakers, stand-up paddle boarders, ocean swimmers, or any other groups who use the ocean for recreation. Just do the math: Take one ocean, add sharks, then multiply that number by 10. Add humans to the water, increase by a third or more, and the result is bound to be more encounters, more attacks, and probably more deaths.

“We’ve had two generations of Americans with unfettered access to the ocean,” Lowe said, “and they’re just now realizing that we have an apex predator to share it with.”

Lowe has been director of the Shark Lab for 17 years. The research facility was created in 1969, and though sharks garner huge pop-culture interest (Sharknado, anyone?), there’s shockingly little information about white sharks. Reproductive habits, social behavior, adolescent and adult ranges and habits—it’s all very murky.

Lowe said juveniles cut their teeth on fish, rays, and other small prey in the waters around Los Angeles. Adult white sharks are known to feed on sea lions and large marine mammals around the Farallon Islands and Año Nuevo in Northern California. But there’s a lot of coastline and questions between Marin and Malibu.

“My guess is that there’s a lot more sharks than we know along the Central Coast,” Lowe said.

Adult sharks have been tagged in the Farallones, then tracked at Cal Poly’s pier in Avila on their way south, possibly on their way to Mexican waters or much farther.

Warmer ocean waters the past two years have only muddled the picture. Juvenile sharks, which normally move south to Baja during their first winter, didn’t move south, according to Lowe. There’s probably three years’ worth of pups (baby sharks) hanging around, instead of one year’s worth. Then, in early September, a hammerhead shark bit a kayaker’s foot off the coast of Malibu. Hammerheads aren’t supposed to be in Malibu.

The warmer waters are attracting warm water species. Local anglers are catching warm water fish like bonito (a relative of tuna), according to Ruttenberg.

“With El Niño, things are going to be very different,” Lowe said. “I’ll be shocked if we don’t see some hammerhead out by Avila.”

So, should we panic? Experts say no.

“Sharks are not out to get us,” Ruttenberg said. “They don’t want to eat us. Usually, when they bite someone, it’s a mistake. Don’t be scared. That’s the take-home message.”

Staff Writer Kylie Mendonca keeps to the kiddie pool. Tell her about your shark tales by emailing kmendonca@newtimesslo.com.