She blinded me with science: Former professer brings excitement back to learning

Science is easily the coolest subject that kids get to study in school. It’s the discipline that encompasses explosions, dinosaurs, robots, lasers, stars, and basically every other awesome thing in the universe. It’s such a shame that many young’uns see science as just another boring class to slog through.

That’s what made former Cal Poly mechanical engineering professor Aurora Lipper quit her job at the college and forge a new path. 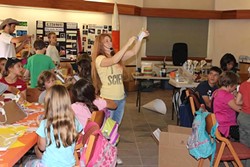 “The reason I switched from being a professor to donating my time in the classroom is that the students I was getting at university were already bored when they came to my classes,” Lipper said. “I’m like, how could you be bored? We’re working with rockets, and lasers, and pulse jet engines, and all kinds of stuff. They’d already been burnt out.

“So I thought, hmm, there must be a way to do something about this—that’s when I started donating my time. At first I just wanted to see what they were being taught. I remember feeling like, wow, I’d be bored too. So I started doing something about it.”

Lipper taught extracurricular science classes across the county. According to Lipper, those classes were so popular she couldn’t juggle their demand and her children anymore. She decided to move her science education online.

Those online classes eventually became an entire business. On her website superchargedscience.com, Lipper has posted more than 1,700 educational videos, curriculum guides, and instructions on how to make learning science fun.

“It’s available to anyone around the world,” Lipper said. “We’ve got about 100,000 students in the program. Right now it goes from kindergarten all the way to AP level. It’s applied science—really hands-on, fun stuff.”

For national engineering week at the end of February, Lipper is holding a special free robotics class for kids aged 7 to 12. There are two hour-long sessions available on Feb. 28—one starting at 10 a.m., the other at 11:30 a.m.—at the SLO library.

“Kids will come in knowing absolutely nothing, and leave with a robot that works,” Lipper said. “We’re gonna teach them the ins and outs of circuits, and how to hook up motors, and wires, and batteries, and LEDs. We’ll show them the basics, and at the end every robot will work and every robot will be different—there’s a lot of room for creativity.

“Some of the robots will swim, some will dance, some will, well, do nothing until they make them work. Everyone will be successful at their goal by the end of the class. The kids are excited, and they walk away from the class with a project that actually works.”

Lipper said that the class is designed to show kids just how fun science really is, and to teach them critical thinking, troubleshooting, and problem  solving skills.

Call 781-5775 to reserve a spot in one of the Feb. 28 classes at the SLO library—space is very limited. To find out more about Lipper’s online science videos and teaching resources, go to superchargedscience.com.

“It’s so fun,” Lipper said. “I love teaching—I just have a total blast.  And the library is such an important resource for us.”

Cal Poly’s instrumental ensembles are fantastic, and it’s not cheap to outfit all of those talented young musicians with the equipment they need to succeed. That’s why the school started its annual Run for Music fundraiser three years ago.

This year’s 5K/10K run will take place at 10 a.m. Feb. 7 on campus. The entry fee ranges between $20 and $40, but there is a $5 discount for pre-registration. The fee also covers race day entertainment, post-race refreshments, and a T-shirt. Proceeds go to sponsoring Cal Poly’s spring chamber music series and getting new equipment for the bands.

For more information about Cal Poly’s Run for Music, check out runformusic.com or email runformusicchair@iotapi.com.

Intern Cliff Mathieson is developing a robot that will do his reporting for him. Send your business and nonprofit news to strokes@newtimesslo.com.