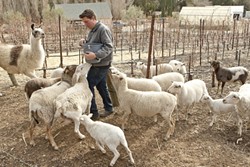 It’s hardly something we wine lovers think about when we head out to SLO County’s agricultural trails for a fun day of wine tasting, but wineries with estate vineyards are, plain and simply, working farms. So while those cute little woolly sheep are quaint to watch grazing alongside the grapevines, they’re actually doing their job by keeping the vineyard green and healthy. How cool is that? That was certainly my first thought when I called on wineries where farm animals are an integral part of growing fine wines under sustainable farming practices.

The story idea was initiated by Jason Haas, partner and general manager of Tablas Creek, whom I met at the Paso Robles winery with his viticulturist, Levi Glenn. We immediately walked out to see the huge pen of farm animals near the wine tasting room. This educational tour is open to the public twice daily, and most visitors want to see the farm animals and the greenhouses. The attraction also lures Tablas Creek’s staff and management, who have started visiting on weekends, bringing along their children who enjoy seeing the herd of sheep, alpacas, llamas, and donkeys.

“We just had two sets of twin lambs born in the lambing barn in the last two weeks,” Glenn said, pointing out the adorable little lambs shadowing their mothers. With them was a very large llama that protects the sheep from predators. “Coyotes, mountain lions, and bobcats are the main issue. The llama is pretty tame, and at 400 pounds. he’s big enough to protect the sheep. He accepts them as his own herd.” Not only do they breed the animals to increase the herd, they grow barley to supplement their diet. It was obvious the animals are well fed when it didn’t take much to get the herd racing to the gate. That’s where I met Fiona and Dotty, the winery donkeys. Although they don’t plow like horses, they police the herd, too.

“They can pick up and throw a predator,” Haas noted. “The donkeys are dangerously smart. They learned how to open the gate and let the animals out, so we had to put a padlock on it.”

All of these protectors are necessary to watch over the sheep who do the real work for the winery. “The reason we have the sheep in the vineyards is to eat the cover crops, and they fertilize the ground and distribute it with their hooves,” Glenn explained. “They reduce fuel costs and machinery to mow the grass. And they create healthy soils with the microorganisms they leave behind.”

In Edna Valley, vintner John Alban of Alban Vineyards started experimenting with sheep in the vineyard nearly a decade ago. “Our herd is primarily sheep. We experimented for a few years and went whole sheep in 2006,” the witty Rhone wine specialist quipped. “They’re awesome at composting. They’ll eat the grape skins, pumice, and stems. Instead of the 90 days it would take us to make compost, with sheep it only takes nine hours. And they spread it very evenly around the vineyard.”

The sheep begin grazing after harvest until bud break in the following spring. Alban admitted the sheep do like to scratch their woolly coats if they’re shedding, which can break a young, fragile grapevine. Once the shoots are strong enough, however, the sheep can go back into the vineyards until veraison when the hard green winegrapes begin to color and ripen. Obviously, the winery must have enough land to allow the animals to live during the growing season when they’re banned from the vineyards. 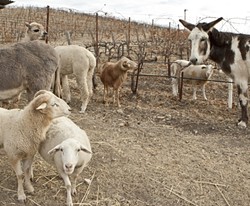 “The sheep will eat some leaves but they’re doing us a favor by leafing for us, which allows the sunlight necessary to ripen the grapes,” added Alban, who says his Great Pyrenees dogs do much more to protect the sheep than his llama can do. “It has been such a dry year I may have to supplement the sheep’s food this year, but normally they live off the land.”

At Adelaida Cellars in Paso Robles, winemaker Jeremy Weintraub explained they were hand-hoeing and had stopped using herbicides in an effort to be more kind to the vineyards and the land. Unlike Alban, Weintraub doesn’t want the sheep eating grape leaves. “We need the outer leaves for sun protection here, unlike growers in Edna Valley,” Weintraub pointed out. Once they established their sheep herd they found an unexpected benefit. “The sheep are a real pleasure to have around. We also have llamas and alpacas and we’ve found people visiting us have a really good feeling seeing the animals grazing.”

The sheep program is overseen by local expert Deborah Sowerby, whose husband Paul Sowerby is the national sales manager for Adelaida. She explained she’s raising the Dorper sheep breed on their ranch, and she noted, “They can lamb year round.” She works with the herd at Adelaida twice a week, and has help from the winery staff. “The sheep are perfect in the vineyards for their walking ability. They can easily climb the steep hillside vineyards. We tried goats, but they eat with their heads up while sheep eat with their heads down. Their dual purpose makes sheep very efficient: Eating the cover crop between the vines and supplying fertilizer which they spread around make them perfect for vineyards,” the enthusiast explained.

Her latest project is creating a cross breed with miniature sheep. An old English breed named “Babydolls,” they range from 17 to 24 inches tall. It’s a good-natured breed that produces fine wool in the class of cashmere, according to oldeenglishbabydollregistry.com. Considered organic weeders, they don’t harm the vineyards, trees, or shrubs and leave the ground well groomed and fertilized. That’s particularly important in a vineyard.

“People with open minds that strive for a green future see the sheep as a nice movement,” Sowerby concluded, “and it creates a healthier vineyard!”