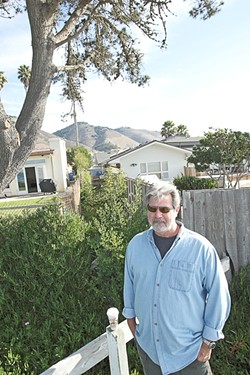 Tim Page, president of the citizen group Save Our Access Path, said he is in negotiations with the homeowner, Mark Yandow, to open the path again—hopefully by mid-March. SOAP members won a ruling in SLO County Superior Court in January. Under that ruling, Judge Charles Crandall determined that the public has a historical right to use the path running alongside Yandow’s home, Page said.

Beachgoers had been using the path to access Spyglass and Memory parks since the 1960s, until Yandow fenced it off in 2004.

Now, Page said, he and Yandow are working out the details to let people use the path, but also to keep them from traipsing over and harming Yandow’s property. Their agreement may shrink the 10-foot-wide path a little to make room for a fence, but one that will not block the path entirely.

Attorneys from both sides still have to craft a formal settlement, but Page believed the court fight is over.

“We both spent a lot of money on legal expenses and we didn’t want to spend any more so we both agreed to end this thing,” Page said. Yandow did not return a call for comment.

SOAP members could get a court order that would require Yandow to remove fences he already installed and restore the path to its original condition, Page said. If there is an appeal, the California Coastal Commission would likely have to get involved, according to spokeswoman Sarah Christie. For now, the court battles appear to be done and the path will soon be open again.

“It looks like everything is going to be fine,” Page said.