"He said racism does exist but it doesn't exist in SLO County. Is that true?" the speaker asked the crowd. "No, that's not true, that's ignorance. That is his white privilege."

The speaker was addressing protesters gathered at Mitchell Park on July 21, a rally organized in part as a response to comments that SLO County Sheriff Ian Parkinson made earlier in the month. 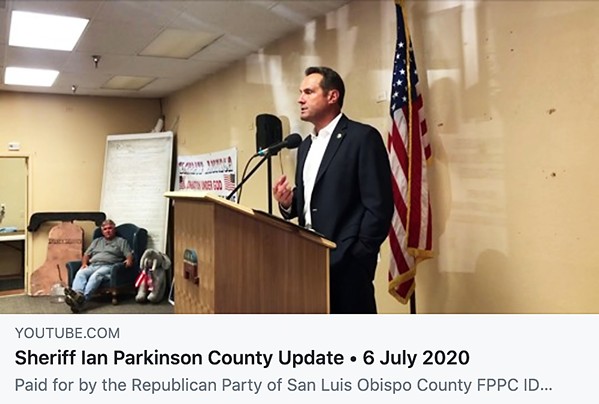 For a while, a video was available on Slohealth Nut's YouTube account showing Parkinson speaking at the July 6 North County Tea Party meeting. He was giving a "sheriff's update," which included remarks about his thoughts on wearing masks, local protests, and racism in SLO County.

The video has since been made private, but echoes of the sheriff's remarks were heard throughout the protest in SLO, a rally that eventually marched through downtown, halted traffic on Highway 101, and ended in its organizer being arrested.

Before the protest, New Times reached out to the sheriff for further comment.

In the video, Parkinson talks about having to release inmates due to COVID-19 concerns, his opposition of beach closures at the local level, negative attitude toward law enforcement, and an individual's "personal responsibility" when it comes to wearing a mask.

In the follow-up email interview, Parkinson told New Times he should have clarified at the time that he believes people should wear a mask if they can. But if they have any of the underlying medical issues that prevent them from wearing a mask, they should not.

"I instituted business checks in all the unincorporated areas of the county every day to confirm indoor mask compliance. Our focus is not on issuing citations but education and voluntary compliance," he said in the email.

At the July 6 meeting, Parkinson said the vandalism, riots, burning, and the trashing of monuments "bother the hell out of him."

Parkinson said that he agrees with anyone exercising their right to protest, but when it gets into damaging or hurting people or their place of business, he can't support it.

"Unbelievable, I said, 'Look you know what, if any of the cities have that happen, guess what? Sheriff's coming to town with the posse,'" he said in the video.

He continued by saying he doesn't understand why law enforcement in SLO County is experiencing a negative backlash from the George Floyd incident in Minneapolis.

"I do understand in areas that have heavy minority communities that might feel that way, how they might feel that way. But here in San Luis Obispo we're being trashed over this issue of something that is truly not here in that form," he said at the meeting.

In Parkinson's email to New Times, he said that racism, "unfortunately, exists, everywhere."

"We cannot ignore racism, and we cannot tolerate it as a community. That does not mean we can't strive to be better. We should all want to identify areas that we need to improve and change," he said in the email. "It is hard to have a conversation when people are angry and agitated and not ready to sit down and discuss solutions."

"I do not tolerate mistreatment and excessive force by my deputies and have taken significant steps to identify it and prevent it," he continued.

More than once in the recorded talk to the Tea Party, Parkinson says he just doesn't understand "why this is happening when there is no end game."

He clarified to New Times that he was referring to the violence that has occurred in protests, generally.

"The movement has a profound purpose and can lead to good things throughout the nation, but I believe the damage and destruction must stop before we can make substantial changes," he told New Times. "I've said before, I wholeheartedly support a community's right to exercise their First Amendment rights to protest and express themselves in a nonviolent and non-destructive manner," he said.

"But we have seen how some protests in other parts of the country have become violent. And in doing so, the message of injustice and racism has been overshadowed or in many cases lost completely in the ensuing chaos."

New Times reached out to all members of the SLO County Board of Supervisors for comment on the video. Only 2nd District Supervisor Bruce Gibson responded, telling New Times that the sheriff's remarks appeared directed at a narrow political constituency.

"Some of the comments he made, especially those about his refusal to enforce state and local health orders, are deeply concerning to me and contradict my understanding of his department's role in our pandemic response," Gibson said. "He should explain those comments to the wider community he was elected to protect."

As of press time none of the other Board of Supervisors have responded to New Times' request for comment, and the sheriff hadn't issued a public response.

"If we actually try to take a protester point of view, I was thinking that they would be extremely concerned about their own safety," she said.

That sentiment was loudly stated at the beginning of the protest in Mitchell Park's gazebo in downtown SLO. One speaker addressed the YouTube video and called out Parkinson for his comments on racism and his "white privilege."

At one point the speaker said to the crowd that she's scared of the sheriff.

"I'm scared of him not because I think that he's stronger than me, or smarter than me, but I'm scared because he can do anything to me, to my friends, to my family, and get away with it," she said. Δ