Public outcry and protests weren't the only things that followed the release of the footage of Andrew Holland's death. 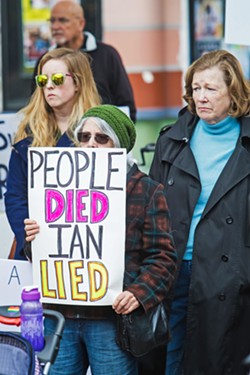 While some in the community were calling for his resignation, incumbent SLO County Sheriff Ian Parkinson received tens of thousands of dollars in campaign donations after video of Holland's final hours in SLO County Jail received local, national, and international media coverage.

Since March 16, when the SLO Tribune published portions of the long-withheld footage of Holland—who died in the jail on Jan. 22, 2017, after being strapped in a restraint chair for 46 hours—Parkinson's re-election campaign received $23,194 from 17 individuals or businesses. The two largest donors in that period included a $3,384 from Giuseppe's restaurant and $3,000 from the San Luis Obispo-based Walter Bros. Construction Company.

The donations made to Parkinson after the video's release totaled up to nearly as much as the recent $25,000 donation made by members of the Holland family to his opponent, former police officer and private investigator Greg Clayton.

While Parkinson faced criticism following the release of the footage, the controversy also appeared to rally many of his supporters to come to his defense. In days after the footage was released, Parkinson's Facebook page was flooded with messages of support.

"Sheriff Parkinson is a good leader and cares about the community he serves and the professional staff he leads," supporter Todd Dearborn wrote. "Anyone can lead when times are good. Sheriff Parkinson has proven he can lead in both good and bad times."

After the video was released, Parkinson issued a written statement pointing to failures by the county's Behavioral Health Agency to transfer Holland to its psychiatric care facility. Many of his supporters echoed the sentiments in their own comments, voicing their belief that Parkinson was being blamed for the failures of another county agency.

"Sheriff, your department did everything they could," wrote Diane Perry, a Paso Robles resident. "Yes it was tragic, but it was not the department's fault."

Just how much both Parkinson and his opponent have raised for the election is currently unknown. Thus far, they've only been required to disclose donations from individuals or entities that total $1,000 or more. Both candidates will be required to disclose all donations received in the first four months of 2018 at the end of April. Δ