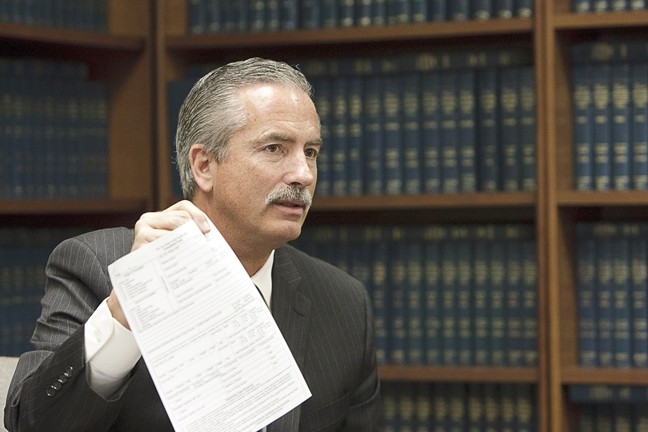 San Luis Obispo County Sheriff Ian Parkinson presented his new internal affairs commander at a press conference at the department’s headquarters on May 10.

Jim Voge, a retired Los Angeles Police Department commander and Cambria resident, has been on the job since February. He retired in 2007 after heading the LAPD’s Internal Affairs unit, which employed 278 and investigated more than 6,000 complaints.

Presented to the county’s press representatives at a conference room at Sheriff’s Department headquarters, Voge, said Parkinson, was a nearly prefect candidate for the job.

Voge said he will be an “objective fact finder” and will investigate any complaints the department receives.

“Our goal is to find the truth of the matter, and sometimes that truth of the matter can expose us to liability,” Voge said when asked if he would fairly investigate situations that might damage the department. “If there is misconduct, we will find it.”

Voge is a part-time, non-benefited employee who will reportedly earn $54.30 to $66 per hour.

Parkinson said department employees will be held to a high standard.

“If they make a mistake and they do something that’s improper, they will be held accountable,”
he said.

Voge had already designed a new, more expansive complaint form. He said all complaints would be given his full attention.

Pat Hedges, Parkinson’s immediate predecessor, wasn’t known for accountability. During his 12 years in office, the department had to pay out millions to settle lawsuits, the most memorable being some wrongful death cases. The former sheriff also bugged an employee which, in the end, resulted in the department paying out a $660,000 legal settlement.

Hedges eliminated his internal affairs unit years ago. All complaints were handled by department supervisors.

From the first few sentences uttered by Parkinson at the conference, the motivation behind hiring the new internal affairs chief was clear.

“In the last two years, I’ve heard from a lot of people about internal affairs within the department,” said Parkinson, who was elected in November. “The concerns were about whether we have been policing our own and whether there has been accountability.”

This media event was the latest stop on what seems to be the I’m-nothing-like-Hedges tour. From having meet-and-greets with the public, to reinstating the internal affairs unit, Parkinson is clearly trying to separate himself from Hedges’ legacy.