Local do-gooders thinking of taking on illegal marijuana growers should think twice, according to a recent warning from the SLO County Sheriff's Office.

On Aug. 10, the department took to social media to warn residents against confronting suspected criminals involved in illegal marijuana growing operations, indicating that doing so could endanger their safety or even their lives. 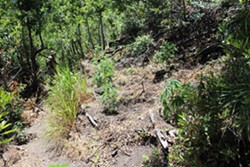 The warning, posted to the Sheriff's Office Facebook page, pointed to the Aug. 7 death of 47-year-old Madera County resident Timothy Fadgen as an example of the dangers of confronting illegal marijuana cultivators. According to reports from the Associated Press, Fadgen was shot and killed after he confronted three men illegally growing marijuana near the edge of his property in Oakhurst.

"As a result, the Sheriff's Office is reminding folks, if you see something, don't take matters into your own hands," the Facebook post read. "Call your local law enforcement agency and let them handle the situation."

The warning comes as the Sheriff's Office expects the county to experience a higher number of illegal pot grows than the previous year, thanks to the heavy rains that hit the county in early 2017. While the deluge may have been a gift for local drought-parched vineyards and farms, it was also a boon for illegal growers, who count on that water for their illicit grows.

"In the past, illegal grows would divert water from nearby streams and creeks to irrigate the marijuana plants. They would also create small reservoirs to store the water for irrigation," Sheriff's spokesman Tony Cipolla wrote in an email response to questions from New Times. "The drought dried up those creeks and streams. Now with the recent rains, those water sources are once again running. And we anticipate the illegal grows will once again begin diverting the water for their plants."

According to data from the department, the sheriff's narcotics unit seized 31,750 marijuana plants in 2016, down from 49,410 plants the previous year. The department has seized 6,550 plants so far this year.

Illegal grows are often found in remote areas and can present an environmental hazard, according to sheriff's officials. In June 2016, the department discovered more than 7,400 plants in a massive illegal cultivation operation tucked away in a rugged area of the Los Padres National Forest in rural San Luis Obispo.

"This type of operation, besides being illegal, produces many environmental hazards including toxic pesticide and chemical runoff, altering the natural water flow to be used for irrigation, and generating large amounts of trash," the department said in a written statement issued shortly after the bust. Δ