Sheriff's department takes to the seas

It was one of those perks that makes being a reporter worthwhile. At a time we’d usually be sitting through yet another staff meeting, two New Times reporters instead took an early morning excursion in the Morro Bay harbor on the sheriff’s department’s newly refurbished seaworthy vessel. The boat will be used for search and rescue situations, as well as responses to increasing sightings of panga once the typically-drug-smuggling craft are found onshore.

Around 8:30 a.m. on April 25, New Times Staff Photographer Steve Miller and I met Sheriff Ian Parkinson, department spokesman Tony Cipolla, and deputies Bryan Love and Todd Steeb at the Morro Bay marina to take the vessel out for a test ride to the Cayucos pier and back. 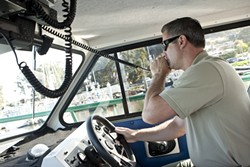 The conditions couldn’t have been better; the morning’s foggy forecast turned out to be a bust, and the water was glassy with little to no wind. As we pulled up, Parkinson and crew were driving the boat into the marina.

The department bought the vessel, previously known as the Almar, in 1992 and recently refurbished it with little taxpayer expense thanks to volunteer work by skilled inmates at the California Men’s Colony, as well as some federal grant funding Steeb helped secure.

The boat is roughly 21 feet long with a 4-foot swim deck. It carries a two-stroke Yamaha 350 engine and is fully equipped with the best radar and sonar technology 1992 had to offer. But it’s all the department needs, and the price was right, Parkinson said.

The sheriff had previously considered buying another vessel, but elected to invest in the Almar instead, given that the department knew the vessel’s history.

“I didn’t want to inherit a piece of junk,” Parkinson said as he leaned back on the railing and breathed in the morning air.

He added that the boat won’t be used to necessarily interdict panga once they’re detected off the coast—that’s the job of the Coast Guard—but rather to tow the ship to an accessible location so deputies can drive it to the sheriff’s headquarters where it will be stored. Parkinson calls it a “response and recovery” vessel.

The last time a panga was found on shore—at a remote beach near Piedras Blancas in November 2012—Parkinson had to call the Coast Guard to tow the thing, and Immigration and Customs Enforcement had to foot the bill.

“We don’t want to be in a position where we need to ask for help from other agencies when these things pop up,” Parkinson said. “Dealing with pangas once they are discovered on the beach is one of the biggest problems. This allows us to recover and take the boat with little expense.”

According to Steeb, the department’s boat will require roughly $600 per year to service and maintain, and it’s expected to last the department about 15 years, give or take. It will join the department’s fleet of one freshwater vessel, one pontoon boat, and two old inflatables, which were donated by the Coast Guard.

During our outing, we came upon a group of sea-doers who looked suspicious; we went in to investigate. Turned out they were CalFire guys doing training exercises. At one point, we saw what Miller swore up and down was a killer whale breach for a split second about 50 meters away, then disappear in the glassy sea.

Steeb—who had been our captain that morning—eventually relinquished control of the vessel to his boss, who readily took the helm. Parkinson did all right; there were no sudden jerks, and Miller’s breakfast didn’t make any surprise appearances.

Parkinson later explained that the department has a tradition of naming vessels after its fallen employees. Rob Bryn—the well-known voice of the Sheriff’s Department for nearly a decade—passed away in March 2012 and will posthumously lend his name to this craft. The department has a freshwater vessel, the Christopher Meadows, named after the search and rescue volunteer who lost his life responding to a call for help in the Oceano dunes in August 2011.

The department is scheduled to hold a dedication ceremony at 3 p.m. on May 3 at the Honor Farm building at 880 Oklahoma Ave. in San Luis Obispo. For more information, call Cipolla at 781-4547. ∆