View a slideshow from the event.

It’s Saturday, Sept. 12, and as I’m riding toward the Madonna Inn meadow for Sheriff’s Family Day, I see a helicopter coming in for a landing near two other choppers parked at the west end of the field.

A trio of Sheriff’s deputies are on horseback, and the field is littered with dozens of emergency vehicles and first responder displays as well as hundreds of kids and their parents who are getting up close-and-personal looks at the tools of the law enforcement and emergency services trade. 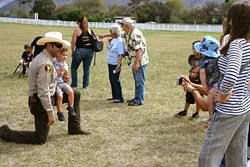 SLO City and Cal Fire personnel are just finishing their demonstration of the JAWS of life as I park my bike and walk into the field. The doors and roof of the white compact car lie on the ground, snipped off with relative ease.

I walk on and see a firefighter reaching up to help a young kid navigate the rear stairs of a massive fire truck, where families are given tours of the various compartments and equipment. Further on, three helicopters have lines of families waiting their turn to take a closer look.

For many people, this is as close as they’ll ever get to this equipment and vehicles, and the kids in particular seem utterly fascinated.

“Daddy, look!” squeals a little boy, pointing to the two rope bridges set up by local Boy Scout Troop 322. One is low to the ground and perfect for little kids, the other a bit higher, and a scout leader walks alongside a boy about 10 years old as he tries to make his way across the narrow rope, eventually losing his footing, and slipping—crotch first—onto the rope.

“Oomph!” he says, making a face familiar to anyone who’s ever been whacked in the jewels.

“Are you OK?” cries his mother as the scout leader helps him out of his predicament.

“Probably not the best shoes for this,” adds the scout leader, picking up one of the kid’s Crocs that came loose during his fall. 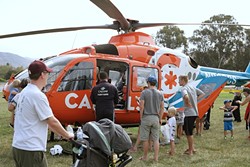 Next I wander over to the Central Coast veterans’ display, where they’ve set up part of their armory usually housed in their Veterans Memorial Museum in the SLO Vets Hall. I pick up their AK-47 and am told it’s relativity light because it’s missing some of its hardware. Next I heft their Thompson Machine Gun, which is remarkably heavy. I try to imagine what it’d be like to unleash these automatic machineguns’ full fury.

“The museum’s open Wednesdays through Sundays from 10 a.m. to 3 p.m. and admission is free,” says a younger fellow behind the table.

There’s a search and rescue guy in a dive suit, plus a bomb suit and bomb robot on display; a K-9 unit officer letting kids pet his friendly black Labrador; the DARE Dodge Viper; PG&E handing out toy hard hats; the SWAT Rescue’s armored vehicle with its massive battering ram; and so much more.

As I wander, I spot SLO County Sheriff Ian Parkinson, who’s posing for photos with kids. Parents are pulling out their cellphones as their little ones are hoisted onto the sheriff’s knee.

This may be the most important element of this annual event—allowing kids to see that first responders are people, that their job is to help, and that they’re the good guys.

As I’m leaving, I spot Jerry Lenthall, whose 30 years in law enforcement has made him a fixture at such events.

“Man, these kids are loving this,” I say.

“This is what we call a ‘teachable moment,’ and what psychologists call a ‘S.E.E.,’ Significant Emotional Experience,” Lenthall explains. “I’ve had people come up to me—EMTs, firefighters, law enforcement—and tell me that attending this event set them on their career path.”

In an era of police mistrust and the Black Lives Matter movement, Sheriff’s Family Day is a refreshing reminder that by and large, emergency response is a noble profession.