The small beach town of Oceano recently had another homicide, according to the San Luis Obispo County Sheriff's Office.

The department announced that it was investigating the death of an unnamed man in Oceano who reportedly died after being shot. The death marks the second homicide in the area this year, following the death of a well-known environmental activist in January. 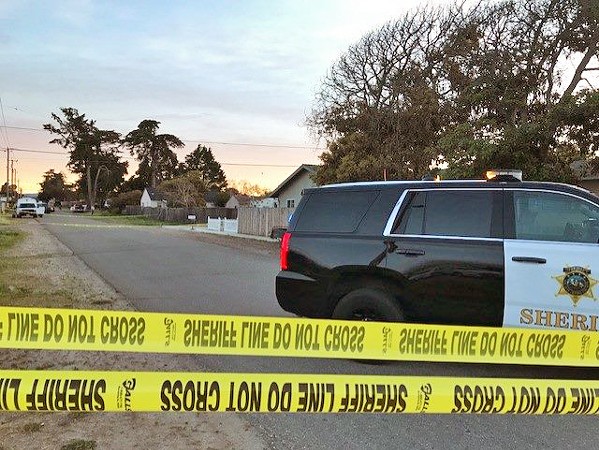 Sheriff's officials said the most recent death occurred in the early morning hours of April. Sheriff's deputies responded to a report of an assault with a deadly weapon in the 2200 block of Beach Street in Oceano. When they arrived, the deputies found a man dead inside the home. After further investigation, sheriff's officials said they believe that the victim knocked on the door of a neighbor's house, and when they opened the door, the victim told the residents inside that he'd been shot.

"My understanding is that the victim and neighbor knew each other, but as to how well they were acquainted, we don't know at this point," Sheriff's spokesman Tony Cipolla said in an email response to questions from New Times.

Cipolla declined to elaborate on where and how many times the victim had been shot. As of April 3, the Sheriff's Office hadn't released the name of the victim and hadn't identified any suspects or made any arrests in the case.

The death occurred less than 2 miles from the scene of another homicide in Oceano. On Jan. 24, sheriff's deputies discovered the body of 90-year-old Oceano Dunes activist Larry Bross at his home in the 1400 block of Strand Way. A medical examiner later determined that Bross died of "multiple chop-force injuries." Bross' murder remains under investigation. The Sheriff's Office hasn't publicly identified any suspects in the case, and no arrests have been made.

On Feb. 28, the Sheriff's Office offered a $10,000 reward for any information that leads to the arrest and conviction of the person responsible for Bross' death.

"There is no indication this is related to the Bross homicide," Cipolla wrote. "We believe this to be an isolated incident."

Anyone with information on either homicide is encouraged to contact the Sheriff's Office directly at (805) 781-4550. They can also anonymously report information to Crime Stoppers at (805) 549-7867 or at slotips.org.