The road from San Francisco to the Santa Monica Pier threads some 500 miles of tarmac through the pastures, bluffs, and beaches of California’s Central Coast. Steve Winter, who worked with Ventura County Fire for three decades, biked that road through SLO and Santa Barbara counties on Aug. 20.

The group making the effort? Firefighters, friends, and family from all across the state. The cause? Fire Velo, an organization that coordinates yearly rides to cast light on a hidden problem—high rates of firefighters with cancer. 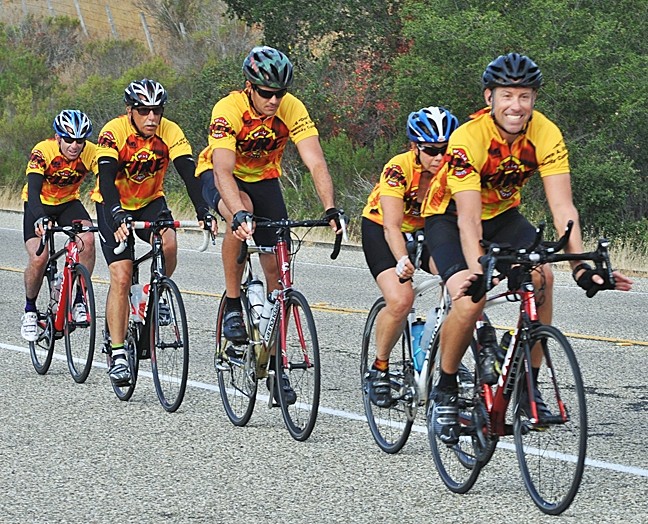 Every year, a group makes the ride down the coast—they range from cadets as young as 18 to seasoned first responders well into their AARP years.

At night, they stop at various fire stations across California. They’re escorted in and out of town by fire trucks, and provided with dinner and beds.

Fire Velo is a national fire department-based biking club. A portion of the proceeds from this ride will go toward the International Firefighting Cancer Foundation (IFCF). When they get to Santa Monica, Fire Rescue Television will record the presentation of a big check to Cindy Ell, the executive director and founder of IFCF.

The National Institute for Safety and Health, in a massive study of some 30,000 firefighters in three different cities, found that firefighters have higher rates of several different kinds of cancer—and a higher rate of all cancers—than the general population.

Rates of mesothelioma, a cancer associated with exposure to asbestos, in firefighters were twice that of the population of the U.S. as a whole. The government has been working to remove asbestos from buildings since the early 1970s, but some structures in California still have the carcinogen. And those buildings sometimes catch fire.

When responding to a fire, firefighters wear special coveralls, called “turnouts,” and respirators that cover their faces. Still, they’re exposed.

The biggest risk they’re exposed to, Winter said, is smoke. “It absorbs through the skin,” he explained. “It’s not just breathing it, it’s whole-body exposure.”

And so, to raise awareness and money, they ride.

“We get to see the whole Central Coast,” Winter said. “It’s a great place to ride your bike in.” This year, there are more than 30 riders—down from previous years because so many firefighters are out on the job, keeping communities across California safe during this summer’s record-setting fire season.

“All of us get pretty sore along the way, but we’re all together and picking each other up and keep moving. It works well. It’s for a good cause. It’s a good week,” Winter said.

For him, as for many on the ride, the cause is deeply personal. Winter was diagnosed with prostate cancer in 2011. He was only 53 years old.

“Guys don’t talk about it,” Winter said. “It’s a hidden thing. They take a lot of steps day-to-day for immediate safety, but long-term risks like this are a different thing. That’s part of this ride—getting it out in the open, and getting the discussion open.”

Winter is now four years cancer free—“knock on wood,” he added quickly. That victory is bittersweet.

“I lost a firefighter of mine, Steve Gregory, in 2007,” he said. The culprit? Esophageal cancer. “We still hear from his family on a regular basis. They’re going to meet us in Malibu.”

When they get to Malibu, the Fire Velo riders will arrive wearing jackets with Gregory’s name stitched across the back.

“That’s important to me,” Winter said. “It means a lot to the guys. It’s more than riding a bike down the coast.”

Those interested in supporting the cause can check out firevelo.com. The “partners” drop-down menu has links to the Firefighter Support Network and Firefighter Cancer Foundation where people can offer support.

Staff Writer Sean McNulty from our sister paper to the south wrote this week’s Strokes and Plugs. Send hot tips and information to strokes@newtimesslo.com.