Shine a light: New Times probes for the paranormal at the Point San Luis Lighthouse

While driving down the narrow, cliff-hugging road at twilight as the fog rolled in, approaching a spooky old lighthouse, I couldn’t shake the feeling that my life had turned into a Stephen King novel.

Earlier, I had called the gatekeeper to double-check that nobody was coming down the one-lane lighthouse road. Diablo Canyon—California’s only nuclear power plant—was tucked right around the corner of the next coastal inlet. Who knew what eerie, radioactive monsters might be lurking somewhere in the cool October night?

By the time I reached the road’s end and first glimpsed the lonely, fog-shrouded beacon shining out to sea, I was thoroughly rattled.

Thankfully, I was met at the Point San Luis Lighthouse in Avila Beach by an experienced team of paranormal investigators and lighthouse historians—the perfect crew to assuage my fears.

Along for the ride were lighthouse executive director Kristi Balzer and her historical intern, Jack San Filippo.

While the paranormal team set up, Balzer took me on a tour of the lighthouse grounds. The lighthouse, she said, was completed in 1890, and was operated by several generations of lighthouse keepers until it was decommissioned in 1974. The automated beacon, which still shines seaward, was installed in an adjacent building, and is maintained by the Coast Guard to this day.

Balzer said that after the lighthouse site decomposed for almost 20 years, the Port San Luis Harbor District acquired most of the land from the federal government in 1992. A nonprofit, the Point San Luis Lighthouse Keepers, has been restoring the old lighthouse keeper’s quarters and offering tours ever since.

During the renovation process, several workers reported hearing spirits, and Balzer first decided to bring in the CCPI to investigate last year. Though Mitch said they were only able to record for a few hours last fall, the team caught a convincing-sounding electronic voice phenomenon (EVP) of a female spirit chastising Mitch to “get off my gown!” after he had just sat on a gown from the 1920s. 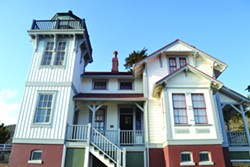 This year, the CCPI team has come back with more equipment, more time, and a steely resolve to coax out the lighthouse’s resident spirits, wherever they may roam.

“We’re not kooky, we’re on the scientific side, and we’re very rational people,” Mitch said as he connected camera feeds to a TV monitor. “There’s a variety of paranormal beliefs on the team, and I think that makes us stronger.”

Mitch, who started CCPI in 2007, has been in the paranormal business ever since a chance encounter with a spirit on his childhood paper route in Nipomo piqued his interest. He said CCPI has conducted roughly 95 paranormal investigations of all types, and only about 10 percent of those have revealed anything tangibly ghostly.

“I guess it’s a pretty low percentage, but it’s worth it,” Mitch said. “Every time we find evidence of even just one spirit, we’re jumping up and down like schoolgirls.”

I came into my inaugural paranormal investigation with a healthy sense of doubt, so Mitch delighted in playing back some of his clearest EVP audio recordings for my edification. I had to admit, most of them were pretty unmistakably spectral, if devoid of context.

Spirit chasing is purely a passion pursuit for Mitch, Micah, and Rob. They all have day jobs around the area, but frequently convene for nighttime searches.

On this particular night, they had rigged the lighthouse keeper’s quarters with infrared cameras (which provide superior pictures in the dark) and a variety of microphones (to pick up EVPs). 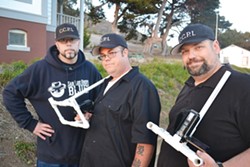 As the investigation started, Micah and Mitch ventured into the pitch-black keeper’s quarters with handheld cameras and mikes, asking questions and calling at the spirits. Meanwhile, Rob and I watched the video monitor in the base of the lighthouse tower.

Rob explained that Mitch and Micah make sure to ground their inquiries in specifics—asking potential spirits about historical items, using names of old residents, and clearly explaining their intent.

I was jumpy and overly eager to see phantasms on the monitor—a phenomenon Mitch called “matrixing”—but Rob’s trained eye easily dismissed many suspicious flares as false alarms—dust, bugs, or the rotating beacon.

Once I had built up my courage, I ventured into the dark building to observe Mitch and Micah at work. I stumbled my way to the living room, where the three of us sat in creaky rocking chairs, lobbing questions into the silent darkness.

“We heard that one of the girls who lived here had polio,” Rob said. “Is that girl here right now, can you say something for us?”

“We heard that Chinese laborers built this place,” Mitch said. “Are any of those workers here tonight?"

“I’m a journalist,” I ventured, trying my hand at spirit-calling. “If you want to have your story told, now would be the time to speak up.”

Suddenly, we heard a pop and a rumble. Mitch eagerly radioed Rob.

“Did you make any noises out there, Rob?” he asked.

“I’m sorry, guys,” Rob radioed back after a few seconds. “I had a little gas.”

Mitch, Micah, and I couldn’t help ourselves, and we cracked up for a solid two minutes, breaking the eerie quiet. Sometimes, Mitch said, small talk or humor can draw in spirits reluctant to miss out on the fun.

After several hours of calling to spirits, though, all we had to show for our efforts were a few unexplained “light anomalies” and sounds, a creepy temperature drop Mitch and Micah experienced, and, well, the flatulence incident.

As the clock inched toward midnight, I had to leave the investigation to get some sleep. The CCPI crew (along with the lighthouse staff) stayed, and recorded audio and video until 2 in the morning.

I checked in with Mitch a few days later, and he said the team was still analyzing their recordings, which is how they catch most of their evidence.

“I wish that we could get a big ol’ ugly apparition waiting to eat us up every time,” Mitch said, with a sigh. “Sadly, it’s just not the case.”