Photos Courtesy Of Journey Home ABBY ROAD The protagonist of Coast, Abby (played by Fatima Ptacek, Dora the Explorer, Before I Disappear), is a 16-year-old who feels "desperate to escape the trappings of her small, coastal farming town," as described in the film's official synopsis.

Find out more about Coast online at coastthefeature.com. For more info on the film's screenings as part of the Santa Barbara International Film Festival, visit sbiff.org.

"I wrote this script 10 years ago. It's strange to have to talk about it now, since so much time has passed," Cindy Kitagawa said, referring to her screenplay for Coast, a locally produced, feature-length film. "It was the first script I ever wrote, and I did years of rewrites all while we worked to try and get it made."

In the film industry, it's fairly uncommon for screenwriters to be on set during a film's production. This was not the case for Kitagawa, which she feels fortunate about.

"I was on set working with the cast and crew during the entire production," Kitagawa said. "I worked side by side with the directors [Jessica Hester and Derek Schweickart] until the very end. They often asked my opinion and wanted me to be part of it all, which I think is a rare opportunity for most screenwriters. So I feel very lucky."

Kitagawa was born and raised in Santa Maria—where most of the film was shot (other cities along the Central Coast include Avila Beach, Grover Beach, and Guadalupe)—and based some aspects of Coast on her own experiences growing up there. The protagonist, Abby (played by Fatima Ptacek, Dora the Explorer, Before I Disappear), is a 16-year-old who feels "desperate to escape the trappings of her small, coastal farming town," as described in the film's synopsis.

"The story itself is not auto-biographical," Kitagawa said. "But the places we hung out, the things we did, the friendships that are your whole life, and that unexplainable angsty feeling you have when you're young. That's all in the script. That part was definitely me."

During the course of the film, Abby falls for the lead singer of a touring rock band and must decide whether or not she wants to leave with him, leaving her family, friends, and hometown behind. The film's official tagline is: "Let the music take you home."

"Music played a huge role in my life growing up. I mean, I'm old—I grew up before the internet, and all we had to connect us to the outside world was music," Kitagawa said. "One of my best friends in high school, her brother had a punk band and we would follow them all over the Central Coast to see them play.

"I think when you're young, music helps give you an identity when you're still trying to figure out who you are," Kitagawa added.

For the film's live music scenes, the filmmakers enlisted local musicians and bands to perform, including Pancho and The Wizards and Hayley and the Crushers, while the film's abundant soundtrack features an original score by Christian Zucconi, Hannah Hooper, and Alex Walker and additional music by Black Match and The Ceremonies (the latter of which also portrays a fictional band, Piñata Jones, in the film).

Regarding the film's upcoming debut at the SBIFF (with screenings held virtually and at local drive-in events), co-directors Hester and Schweickart expressed their enthusiasm that Coast is able to premiere at a festival based on the Central Coast, "a special place that we fought very hard to capture authentically," they said in press materials.

The duo is from New York but moved to Santa Maria during the film's production. The film's ensemble cast is also made up of several non-locals, including Academy Award-winner Melissa Leo (The Fighter, Frozen River). 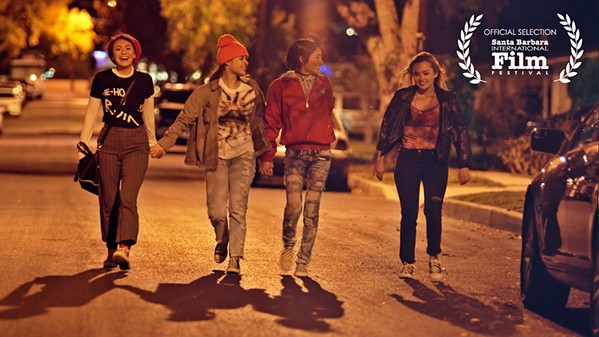 "I remember thinking how all these people traveled to Santa Maria to tell my story. It was truly unbelievable," said Kitagawa, who is currently in the middle of co-writing her next screenplay with fellow Santa Maria local Ernesto Rivera. "They filmed 13 pages a day for 18 days, almost entirely nights, at an ultra low budget. I am forever grateful to the cast and crew who stuck it out." Δ