Shut down for speaking up

Fluttering weakly in a fall breeze blowing off the Salinas River north of Paso Robles, the American flag at the entrance to Colleen Enk’s home is faded and tattered. There have been times lately, Enk herself allows, when she feels much like that flag: patriotic, but at a cost.

Enk’s saga began shortly after she started to question new sand and gravel mines proposed for her neighborhood and elsewhere in the North County.

She found herself the apparent target of a tactic developers have been using against their opponents for years, a lawsuit known as a SLAPP—Strategic Lawsuit Against Public Participation. And even though California has a law designed to discourage SLAPPs and protect free speech, Enk was caught in a loophole that has forced her to pay several thousand dollars in attorney fees and court costs.

“Colleen has been sued for exercising the right of free speech in America. She’s been stomped,” explained her attorney, Roy Ogden.

“She and her neighbors did what people in America get to do—voice their opposition to proposed development.”

The development proposed in this case is five separate sand-mining operations, which would dig up and haul away sand and gravel from the Salinas River system over the next 20 years. Enk and her riverside neighbors from Paso Robles to San Miguel have questioned the plans. They’ve been asking county officials to look at the combined effects of all the proposed mining operations, rather than considering each one separately.

Late on a May evening before Enk was due to voice her opinion at a meeting of the San Luis Obispo County Planning Commission the next day, a knock came at her door.

A process server waited on her front porch to present her with notice of a lawsuit filed on behalf of three of the would-be miners—Paul Viborg, John Pehl, and Colin Weyrick—accusing her and 50 unnamed John Does of libel, defamation, and civil conspiracy, among other charges, and seeking damages.

The service was unsuccessful that night, since Enk, a professional horse trainer, hadn’t yet returned home from working at a horse-roping event. Still, the idea of being sued had her quaking in her boots.

She spoke out at the Planning Commission meeting the next day in spite of her fear. “My heart was pounding out to here,” she said, extending her hand in front of her chest. 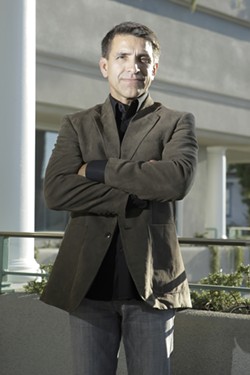 The following morning while she was still in bed, the knock came again. She woke up to find out why she was being summoned to court.

“It’s pretty transparent why they did it,” Ogden said. “They wanted to shut her up. It’s David and Goliath. It’s a classic SLAPP suit.”

The lawyer for the prospective sand miners, Daniel McGee, denied that it was intended as a SLAPP suit. He offered no other comment.

John Pehl, one of the mining applicants who filed the suit against Enk and 50 John Does, said he doesn’t think it’s a SLAPP suit, adding, “But I don’t know, I haven’t Googled it. I see it as standing up for my rights. I just want my fair day in court, so to speak.

“Free speech is something I believe in. Speak all you want. But if you’re going to throw out an accusation, make sure it’s the truth. Make sure it’s accurate. I’m not trying to bury anybody, just saying ‘Back off.’

“The whole darn thing’s a big chess game. You just see what your opponent does. On that day, it [the lawsuit] seemed like the right thing to do. I have no idea if it did any good. I still wave to Colleen on the road.”

As for why the lawsuit was withdrawn before going to trial, Pehl said, “I’m not looking for money from anybody. I don’t want to sue anybody.”

The charges against Enk and her so-called “co-conspirators” never made it to trial. Two and a half months after Enk was served, the plaintiffs dropped their lawsuit.

Most SLAPP cases are without legal merit, but achieve their objective of chilling public debate, according to the California Anti-SLAPP Project, a public interest law firm and policy organization dedicating to fighting SLAPPs and protecting the Constitutional right to participate in civic affairs and to speak freely about public issues.

Thousands of Americans have been “SLAPPed” for writing letters to the editor, circulating petitions, calling public officials, or speaking at public meetings, according to legal experts. Defending a SLAPP takes money, time, and legal resources, and diverts the SLAPP target’s attention from the public issues.

“SLAPPs have absolutely been effective in chilling free speech,” said David Ardia, director of the Citizen Media Law Project at Harvard University, in a recent interview. “Powerful organizations and institutions in our society don’t like to be criticized, and are quick to use lawsuits,” Ardia added. 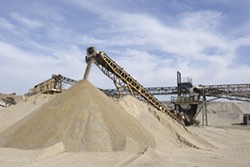 The term grew out of environmental issues a few decades ago, after organizations opposed development on environmental grounds, he said. Developers often had a team of lawyers on hand, and would use the lawyers to file lawsuits usually claiming defamation or libel.

“The cost to defend would typically be so high that it would serve as punishment for having criticized development,” said Ardia.

California was the first state to pass legislation to counteract the growing number of SLAPP suits, in 1992.

California’s anti-SLAPP law gives SLAPP targets an opportunity to have the court rule at the outset whether a SLAPP filer can show a probability of winning the suit. If a judge finds the filer cannot prove the case, the court will strike the complaint, dismiss the suit, and order the SLAPP filer to pay the target’s attorney fees and costs.

Twenty-five other states also now have anti-SLAPP statutes on the books, all of which “at their heart have a provision to allow the shifting of costs and fees so the target is not being punished,” Ardia explained.

“The reason we have anti-SLAPP statutes is that SLAPP suits were so effective in discouraging public participation,” said David Greene, executive director of the Oakland-based First Amendment Project, which provides free legal services to people who’ve been SLAPPed.

“The First Amendment is essential to our democracy. It’s an essential part of living in a free society,” Greene noted.

“SLAPPers can refile a lawsuit again and again. The anti-SLAPP statutes’ provision to recover fees is designed to prevent that.”

“I’ve filed many, many, many anti-SLAPP motions. I would do more, but most people don’t file stupid lawsuits anymore, once they find out there’s a hefty fee. But you still have unsophisticated people who plain and simple want to intimidate their opponents. SLAPP targets get afraid to exercise free speech,” Olson said.

There has been so much litigation over the anti-SLAPP law that it’s been “constantly tweaked,” he explained.

“But for the quintessential SLAPP suit, where a developer sues John or Jane Q. Citizen for speaking up at a city council meeting, the core protection hasn’t changed.”

“When the anti-SLAPP law works the way it was intended, it’s a very helpful tool in the toolbox of freedom of speech,” said Scheer, speaking along with Olson in a conference call from the Bay Area.

“Unfortunately, clever lawyers have figured out how to use it for opposite purposes than it was intended. We’re constantly trying to plug loopholes they find. It’s not a statute without some problems,” Scheer noted.

In Enk’s case with the Salinas River sand mining, the SLAPPers found a loophole big enough to drive a dumptruck through. They withdrew the lawsuit before Enk’s lawyer had a chance to file an anti-SLAPP motion to dismiss, after he declared that was his intention in his initial answer to the suit. Their timing meant that Enk was stuck with her own legal bills.

Is this a common tactic?

“It does happen,” said Mark Goldowitz, director of the California Anti-SLAPP project and one of the writers of the state’s 1992 law. One such case went to the California Supreme Court, which said, according to Goldowitz, that the anti-SLAPP motion could not be invoked.

“It’s definitely one of the tricks SLAPP filers use. It has the effect of sowing fear and generating costs, like a hit-and-run kind of thing.

“Free speech rights are important. It’s unfortunate when those rights are interfered with by the chilling effects of SLAPP, especially when it’s done in a hit-and-run,” he said.

It’s a national, and even international, problem with anti-SLAPP statutes, according to Goldowitz, who added, “We have to pick and choose our battles. It takes a lot of effort and resources to change the law.”

First Amendment advocates are turning their attention to protecting free speech on the Internet. The latest anti-SLAPP amendment in California, due to take effect on January 1 after a two-year effort, gives additional protection to anonymous Internet writers to protect their identity, he said.

Enk now has the option of filing what’s known as a SLAPPback, a malicious prosecution action seeking monetary damages including pain and suffering from the filer, on the theory that the original SLAPP constituted an abuse of the legal process. Some juries have awarded large sums of monetary and punitive damages in SLAPPbacks.

Most anti-SLAPP legal experts don’t recommend this option, however, because these cases are “really, really hard to win,” according to Greene of the First Amendment Project.

Enk said she hasn’t ruled out a malicious prosecution action, but noted that lawsuits are a distraction from the real issues.

Looking across the rich agricultural terrace along the riverfront, she said, “We respect this river. All the oldtimers know that land has been lost along the river. We know it has a mind of its own.”

For her, speaking out about the sand mining proposals is a matter of protecting her property and that of her neighbors, as well as the quality of life in the quiet river valley.

Some of her neighbors are reluctant to join her these days, since the SLAPP suit.

Debbie Lewis owns a home in San Miguel, next to the river. She said she’s worried about becoming a SLAPP target.

“We’re first-time homebuyers. We all have families, and we’re trying to pay the mortgage. We do have the legal right to speak out. We’ve played fair, we do our homework, we follow due process,” Lewis said.

She just bought flood insurance to cover her home in case the river changes its course as a result of flooding—or sand mining.

Enk has carefully studied the minute details of the sand mining proposals and the county reports. Thick files cover the patchwork quilt on the guest bed in their North River Road home, and the closet is stuffed with more paperwork.

“There’s a lot of stuff to know,” she explained, easily bandying around terms like “avulsion”—the tearing away of soil by a change in a river’s course.

She’s more fearful since the SLAPP suit, and said she was afraid to testify at a public meeting on the issue last month. After the meeting, though, she wrote a letter detailing some of her concerns to the Board of Supervisors, admitting, “I chickened out. I’ve been remorseful ever since.”

She trudged with a visitor through the sandy riverbed that’s part of her property, admiring the shimmering autumn-gold cottonwood trees and pointing out an old well that used to sit in the middle of an alfalfa field before the winter of 1969 changed the river’s course.

Her visitor jokes that perhaps Enk could mine and sell some of the riverbed sand herself, to help pay her legal costs from the SLAPP suit—and its wide-open loophole.

A shocked look spread across her face in the sunshine. “I would never do that,” she said. “It would put my neighbors at risk.”

As for that tattered flag, it won’t stand as a symbol of a tattered democracy much longer. Enk says it will soon be replaced.

Contributing writer Kathy Johnston may be reached at kjohnston@newtimesslo.com.