On Sept. 1, every child in San Luis Obispo County will be eligible for health insurance - regardless their family's income or immigration status

It's a common-sense fact: Every kid should have health insurance. Period.

Health professionals have lots of numbers and statistics to back up the argument: Uninsured children have death rates 150 percent higher than kids with insurance. Children without coverage are five times more likely to be treated in an emergency room. Less than half of uninsured children say they have good or excellent health.

And then there's the bottom line costs: For example, here in San Luis Obispo County hospitals spent just under $1 million in uncompensated care for uninsured children and teens in 2002 alone. 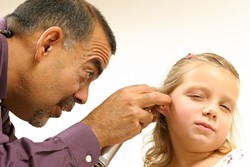 #But despite federal and state programs set up to help insure children, as of 2002, an estimated 3,000 kids in San Luis Obispo County still lack any kind of health coverage.

Enter a nonprofit called Children's Health Initiative of San Luis Obispo and a program called Healthy Kids. Three years in the making, the dozens of organizations and people behind Healthy Kids say they'll be able to give 400 kids this year full medical, vision, and dental coverage - a number that will hopefully grow to 1,000 kids by 2008. At the same time, 2,000 other children will be signed up for state and federal insurance programs.

San Luis Obispo is not the first California county with a program like this. That honor goes to Santa Clara County, home of Silicon Valley. Kena Burke, the executive director of San Luis' program, said Santa Clara officials started Healthy Kids as a result of the dot-com bubble crash five years ago. Suddenly, thousands of children had no insurance as their parents' jobs evaporated when company after company imploded.

By all accounts, Santa Clara's program has been a massive success. It's covered more than 30,000 children, and rightfully claimed credit for a dramatic increase in the number of doctor, dentist, and optometrist visits made by patients under the age of 18. It's also increased enrollment in Medi-Cal and a state program called Healthy Families.

"And when you [increase enrollment], you bring in federal dollars and state dollars that weren't there previously. They are looking at just under $25 million that wasn't there before," San Luis' Burke said, citing the amount of money Santa Clara County's health system saw increase over two years.

Since then, nine other counties have implemented programs and another 17 counties are in the planning stages, including Kern and Santa Barbara counties.

The enrollment process is comparatively simple - for medical insurance.

Interested parents get a single-page form from Healthy Kids to fill out. The county's Department of Social Services takes that form and then asks the family to fill out a brief four-page Medi-Cal application. What Social Services wants to know is if the family is eligible for Medi-Cal or Healthy Families - a state medical insurance program.

If the family doesn't qualify for those programs, Healthy Kids workers check to see if they meet a few requirements: They must be county residents, have not had insurance in the last three months, and be living below 300 percent of the federal poverty level.

If the family meets those requirements, the kids are enrolled receive three insurance cards - one from Santa Barbara Regional Health Authority for the medical plan, one from Delta Dental for dental care, and one from SafeGuard for the vision plan.

From then on, it's up to the parents to make monthly payments, which are based on sliding range: $4 to $15 per child, with maximum of $45 per family.

"It's just like everybody else's health insurance. This is private health insurance for children," Burke said. "This is it. If you don't have your children covered, now's the time to do it. There's no excuse."

So if other government insurance programs exist, why wouldn't these families qualify? Two reasons: too much money and immigration status.

The program called Healthy Families only covers children whose parents make under 250 percent of the federal poverty level. Families who sign up for Healthy Kids, on the other hand, can make up to 300 percent of that federal level. That means a family of four can make up to $4,838 a month and still qualify.

#Healthy Kids also doesn't care about an applicant's immigration status - something both Medi-Cal and Healthy Families do.

"Children go to school together. Children get sick. Pathogens do not know immigration status. It's to the benefit of our community to keep these children well," Burke said.

Santa Clara County found that immigration qualifier was key: The vast majority of the children enrolled in that county's Healthy Kids are Latino and come from non-English-speaking homes where either one or both parents work and are still below the poverty line.

Where the money comes from

Healthy Kids can ignore immigration status because its privately funded - which also makes it's existence a lot more precarious.

Money from a program called First 5 - formed by the Children and Family Act of 1998 - will cover all children ages 0 to 5. But for kids 6 to 18, Kena Burke has to fund-raise.

"I had a gentleman call me yesterday with $5,000 from his parents' will that they had bequeathed to children who were in need," Burke said. "[Fund-raising] is in pieces and steps."

The quarter-million dollars they've raised will cover 400 kids for one year, Burke said. But the final goal is much higher: $1.2 million, which takes care of 1,000 children, by 2008.

And what happens if they run out? Then they'll start a waiting list until they raise more money.

"If that happens that's just going to demonstrate the need we have in the county," said the ever-upbeat Burke.

Even as the opening date for coverage approaches, Burke was obviously nervous about the amount of children they would be able to serve on the funds that they have. As an example, Burke described how she sent out letters describing the program to 1,250 families, and promptly got 650 responses.

"Whether all those children qualify for Healthy Kids or they're actually Medi-Cal, we'll see," she said. "But what that said to me is that there is a lot of need out there and this number, 1,000 kids, has proved very short in other counties and I suspect the same is true in our county."

But Dr. Gregory Thomas, the county public health department's health officer was completely unworried that Healthy Kids would stagnate from a lack of funding. First, he said, the program has a base of financial support that will ensure forward movement.

#"I don't think the money will run out," he said. "There are too many open and generous people in San Luis Obispo County who support kids and will step up to the plate."

One week before coverage begins, Burke said she has 79 children who are ready to enroll and guesses that number will be 100 by Sept. 1. She said she's a little scared as the big day approaches but expects to be more relaxed as time passes and she's able to see how many children will actually need coverage.

"It's just one child at a time, I know. But this is a piece of the puzzle that we can solve," she said. "After we get through this first month, and it's smooth and running, then we'll be ready to rock and roll and go full speed."

Step 2: Fill out the one-page form Healthy Kids sends you.

That's it. Assuming that your family is eligible, Healthy Kids will contact you about how to enroll.

What children are eligible?

- Must be residents of San Luis Obispo County.

- Cannot be eligible for the Medi-Cal or Healthy Families programs.

- Must live in families with incomes at or below 300 percent of the federal poverty level.

How much will it cost?

Monthly payments are based on a sliding scale. Depending how much a family makes, monthly payments can range from $0 to $15 per child, with maximum of $45 per family.

How to donate money to Healthy Kids