Sidecar's Tiki Tuesday is made for modern times

Tiki drink, take me away! Sidecar Cocktail Co.
is located at 1127 Broad St. in downtown San
Luis Obispo and offers brunch, bar plates, dinner,
and bar catering. Tiki Tuesday is held every
Tuesday from 6 p.m. to close ($20 gets you a glass
and a drink; bring 'em back on Tuesday for $10
drinks thereafter). For more information, go to
sidecarcocktail.company or email info@sidecarslo.com.

"The history of humanity cannot be told without talking about alcohol," Sidecar Cocktail Co. owner Josh Christensen says in his jovial, animated tone.

This isn't something barkeeps say to be cute. It's actually true.

I only have to look to the drink before me to understand that the ripples of time are laced with waves of whiskey and rum. Prohibition, slavery, taxes, war: These darker stories run in tandem with the booze, as do the iconic love stories, religious rites, adventures, wakes, and exuberant cultural celebrations.

We're sitting at Sidecar's wide, welcoming wooden bar, perched high on worn leather stools. My drink, crafted by Sidecar Bar Manger and passionate mixologist Danielle Golden, is shaken, swirled, and sloshed into a glossy teal tiki glass before being topped with half a lime (which is then briefly lit on fire with a blow torch for full effect).

It is hot and wild and a little unpredictable. It is something like history in a glass.

But this drink? It's old, made the classic way.

As I slurp down the refreshing, slightly tart, and citrusy concoction—not an ounce of it is "sweet"—I realize I've never really had a true mai tai before. Don't worry: If there's hope for me, there's hope for you too.

Victor Jules Bergeron Jr., born in 1902 in San Francisco, is one of two fellows who claimed to have invented the real mai tai (which is pretty darn similar to the one I'm sipping now).

You probably know Victor best from his famous nickname, "Trader Vic," and the chain of Polynesian-themed restaurants that started in Oakland and went on to populate the world. Ernest Raymond Beaumont Gantt, aka "Don the Beachcomber" is the SoCal counterpart to Vic's stiff, colorful, Caribbean-inspired drinks.

No, you don't have to know either of these names—or have an opinion on who might have been the real granddaddy of the mai tai—to get in on Sidecar's weekly Tiki Tuesday shindigs. Just come as you are. 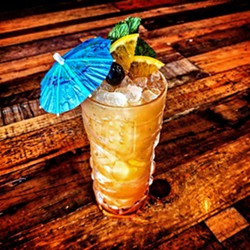 I sure did. I came mostly with a vague feeling that I didn't really know that much about real tiki drink culture. I mean, wasn't it sort of a fun party thing that usually ending in a throbbing headache?

"These drinks are vibrant and flamboyant, it's that whole island vibe," Golden says of tiki's recent resurgence. From Los Angeles to Portland to NYC, you'll find tropical glasses accessorized to the teeth.

These days, rum is your friend, the drinks are well balanced, and Tuesday night tastes a whole lot better when accompanied by a relaxing soundtrack of Martin Denny's exotica, echoing surf guitar, or jungle-inspired soundscapes.

"Somewhere along the line, tiki drinks—and rum especially, became associated with Sandals resorts. It became about drinking something sweet, straight from the gun by the pool in Las Vegas," Christensen says. "There's a time and place for that, but that's not what tiki is about."

What started in the 1930s as an over-the-top interpretation and (let's face it) fetishization of "exotic" Polynesian culture hit its height in the golden era of the cocktail: the 1950s through the 60s. Soon thereafter, campiness and nostalgia took the drinks into dangerous vacation-only territory, dumbing them down into cloying slop.

"My favorite drink in the whole world is a daiquiri," Christensen says. "These drinks come from vivacious cultures. These are people that go after it. They wear loud colors and they dance. They really celebrate life." 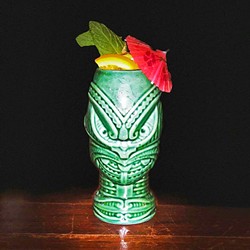 Christensen, along with his wife, Lauren, and brother, Jeremy, are totally celebrating life. Running a cocktail bar and restaurant is not easy work, but it has its shining moments.

As SLO gains popularity and attracts cocktail talent, the longtime mixologist says he sees a solid drink culture emerging in the region. For Sidecar, that reputation has gone far beyond being known for an awesome Bacon Bloody Mary or iconic old fashioned.

"A group of our bartenders went up to the Bay Area recently, and they were shocked at how many bartenders offered them free drinks because they worked at Sidecar. That was beyond flattering," he says. "It's not that our shit doesn't stink, but we want to continue to create drinks that our customers really enjoy. We aren't focused on what everyone else is doing. We're focused on moving forward; we never want to be stagnant."

Like a shark, Christensen says Sidecar has continually had to move forward, lest it die in a pool of its own nutritional-yeast-dusted popcorn (that appetizer has gone away, as has most of the old menu; the classic Brussels sprouts remain as an homage to those early days).

A fiercely creative and independent staff have pushed the bar into uncharted waters, again and again.

The East Coast-born chef cut his teeth in Orange County, running a prominent oyster bar, and he and his wife eventually moved up to Arroyo Grande with the aim of opening their own. That dream changed after the chef took residence under the French wing of chef Julie Simon, former executive chef at downtown SLO's Foremost Wine Company. The pair became fast friends in the kitchen, and he's even woven a bit of Simon's magic into Sidecar's style.

"The bar here is the best around, and as for the food, it was known for the Brussels sprouts, but not much else. I took the favorites of what I've learned along the way and made an entirely new menu," Rucker says.

That includes a savory curried pot pie with spiced biryani and yogurt sauce topped with house-made naan bread, thick-cut fried pig ears slowly cooked in a savory stock, and a beast of a burger made with lamb, pork, and ground chuck. 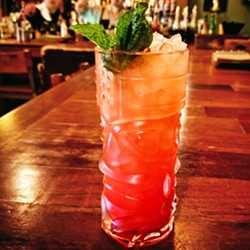 "I season it myself, form it into patties, cook it in duck fat, and top it with bacon. I then take frisee greens tossed with pickled peppers we make here, add heirloom tomatoes, goat cheese, brioche bun with garlic aioli. All it's missing is a fried egg," the chef says.

You could say the menu is "over the top," but that wouldn't be quite right. These are bold, consciously created layers of flavor and texture (aka nothing on the menu will make you fall asleep in mid-chew).

Each Tuesday, the tiki drinks sit like peacocks on the bar, echoing that same philosophy. Like what has become the great, classic tiki style—where palm fronds and glittering shells intermingle with the carved wooden heads of mythical gods—it all just "works" together.

"For us, the bottom line is we want people to know what's in their glass and on their plate is quality," Christensen says. "We want you to have something you've never had before. We want you to expand your experience." Δ

Hayley Thomas Cain is wearing all the florals and dancing to all the exotica. She can be reached at hthomas@newtimesslo.com.