A walking tour was made happier thanks to Bull's Tavern

I live in “the happiest place in the U.S.” (according to National Geographic) and one of the top 10 “best places to retire” (according to the Wall Street Journal). No confirmation yet on whether those two things are somehow related. I’ll let you know when I retire in exactly 18.5 years. What I do know is that the SLO History Center has created a 90-minute multimedia walking tour podcast, the first of three scheduled podcasts that can be downloaded from iTunes.

I figure the best thing to do is gather up New Times photographer Steve E. Miller and my pal David Settino Scott, who happens to wander into Sustenance today, Jan. 28, when I’m in here for the lunch demo, so we hit the streets.

Earbuds in place, we start in front of the old Carnegie Library, which now houses the SLO History Center. Vintage photos appear on the screen of a borrowed iPhone as a narrator explains how the tour is also “about the smells and the sounds of the time.” What the hell? Is this thing scratch-and-sniff? So fancy! 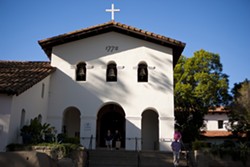 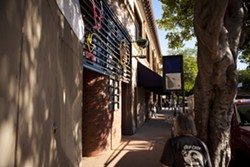 After we learn about the library, we’re directed to walk toward the Mission and face the creek. There before us is a little white building. It’s the Murray Adobe.

“I always thought that was some shack the city stored lawnmowers and stuff in,” I say.

Turns out Walter Murray lived there, which apparently gave him a great seat at the lynching that happened near the Mission.

The narrator is telling us about how the Mission used to house the jail, and how the offices of the 148-member Vigilance Committee also operated out of there, where they frequently “took the law into their own hands” and strung up criminals. Also noted, many of the lynching were racially motivated. Hmm. I guess back then SLO Town wasn’t the happiest place in the United States if you didn’t happen to be the right ethnicity.

Then the narrator is quoting from Murray’s writings about SLO being “beset with evil characters, and robberies were momentarily expected” and how “dead bodies and skeletons” were frequently found on the roads leading out of town.

Holy crap! Thanks for not sugarcoating it, SLO History Center! We’re about to listen to Chapter 4 about Mission Plaza when the neon of Bull’s sign beckons us from across the street. We decide to stop in for a quick one before continuing our tour of the happiest place in the country, so in we go for beers and shots.

Despite all the racially motivated lynching, I’ve got to admit, I’m starting to feel a little happier as I slurp down some Jameson, so we have one more round. We’re fixing to go when yet another around is set before us.

Hey, it’s David Monson, another friend, who bought us this round, further postponing our progress, and now it’s getting to the time when we’re supposed to go review The Mechanic. I’m starting to see why this is such a happy place. Not very productive! Hard to get anything done! But freakin’ happy! We stumble out into the sunshine and head for Fremont Theater. So. Damn. Happy.

So now if you see people walking around the old Carnegie Library, the Mission, and some of the old adobes downtown, and they’ve got earbuds in their ears and are staring up at buildings in wonder, you’ll know why. And if you see them heading into Bull’s, you’ll know they really caught SLO’s happy bug. ∆