Dry goods, fresh produce, and sometimes hygiene products fill the shelves of a medium-sized white cabinet on the corner of Broad and Pismo streets in San Luis Obispo.

This little free pantry has one rule: Take what you need and leave what you can. 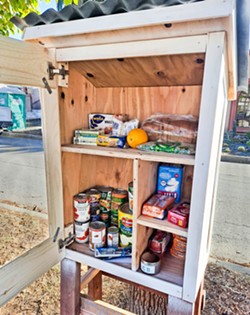 Similar to the little library concept, little free pantries aren't unique to the city of San Luis Obispo. Arkansas resident Jessica McClard is credited with the first recorded mini pantry movement. She set up a wooden box on a post that contained food, personal care, and paper items for anyone in the community to access. As a platform for neighbors to help neighbors, the pantries' goal is to combat food insecurity on a micro-level.

"We encourage residents of SLO County to offer assistance at any scale to our neighbors in need during a time of grave uncertainty and economic hardship. We also encourage those who offer assistance to consider the nutritional value of their food donations and to be mindful that many who need access to food support do not have access to a kitchen or kitchen equipment. Hunger is a community health problem, and the solution is community compassion at all levels," Bird said.

According to the SLO Food Bank, at the start of 2020, approximately 46,000 (6.2 percent) residents in San Luis Obispo County struggled with food insecurity, compared to SLO Health Counts' data from 2018, which reported that 9.2 percent of the population was food insecure.

However, the SLO Food Bank found that hunger in the county increased by 154 percent since the COVID-19 pandemic started, with children accounting for about a third of those using food bank services. About 40 percent of the food bank's recipients are children and teens, 20 percent are seniors, and many are working parents.

Little pantries provide access to food in your backyard as a way of supporting existing programs created by government agencies and local nonprofits.

Graduate student and local activist Ethan Stan and his wife, Emily Cardoza, now host the little pantry on Pismo Street after seeing a post in April 2020 on HelpSLO's sister Facebook page HelloSLO—a space where HelpSLO group members can post uplifting stories and photos. Stan saw a post about a family who built a little pantry but didn't have a place to host it, so he volunteered. After getting the OK from his landlord, Stan alerted the HelpSLO online community about the pantry and the items it needed.

Stan, who's an administrator for the group, said he was blown away by the support and positivity the pantry received then and how it's continued to grow.

"I'll clean it a little bit, but primarily it's completely maintained and taken care of by the community, many of which are people I don't even know," Stan said. "It's miraculous how it fills itself up and empties itself out sometimes two or three times a day."

Eight little pantries in SLO and Los Osos use the HelpSLO Facebook group to call for donations or provide updates on new items. 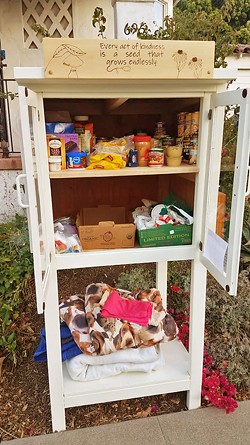 Founded on March 14, 2020, by Cal Poly professor Leah Wood, the HelpSLO Facebook group's goal was to create a network of volunteers who would connect those at risk of contracting COVID-19 with individuals who could run necessary errands or provide material donations to them. Wood's inspiration came from a thread on Twitter where New York City residents were answering calls for help from their neighbors.

"I was watching people respond and say, 'Hey I live in the area. I'll go get it for you.' It was just kind of organically happening in New York on Twitter," Wood said.

She reflected on how many people in the city of San Luis Obispo would need assistance and how many people, like herself, would be willing to lend their time and transportation to help. Within hours of starting the group, more than 1,000 local Facebook users had joined, and the numbers continue to grow. As of press time, the group has 7,400 members with sister pages, such as HelpTempleton, in other communities.

Although the group was formed in response to pandemic-created needs, the group found that these needs existed before and were only exacerbated by the virus.

"If we're lucky, this kind of infrastructure will stay and people will know that this is still here for them, for whatever reason," Wood said. "I think that we created something that can sustain beyond just COVID and can be part of the fabric of our community."

With that mindset, the HelpSLO team envisions growing the network of little pantries with the same concept—a self-sustaining community pantry in neighborhoods throughout SLO County.

Greg Gillet, a lawyer and volunteer, answered a call on HelpSLO to repair a damaged pantry. He and a friend who's a contractor repaired and replaced a pantry on Murray Avenue. During his repair visits, Gillet met families and individuals who benefited from the items inside the pantry.

"I saw a little family walk up and very shyly asked if they could have a can of beans. To me, that hit a lot of nerves," he said. "I come from a poor area in Central California; everybody was poor but everybody helped each other."

On another repair day, he met a 60-year-old woman who lost her position as a health care provider. She told him that were it not for the pantry, she wouldn't be able to eat a full meal because she can't make it to the market.

As a member of the Rotary Club of San Luis Obispo, Gillet said his club was working to get books into the hands of gradeschool students via little libraries, but the pandemic temporarily halted that program. Those plans translated to the little pantries. Rotarians who had the supplies and time to build pantries could do so and donate them to a willing host. He presented the idea to the club in December 2020, and since then, Rotary members have already donated six pantries.

Gillet went a step further, informing Rotary District 5240 Governor Deb Linden, who governs Rotary clubs across the Central Coast region, about the little pantry effort. Linden spread the word and almost all of the clubs have stepped in to help. With their help, the Rotary Club of San Luis Obispo is hoping to establish about 30 to 40 pantries in North and South San Luis Obispo County by mid-March, so food is within walking distance of those who may need it. SLO County residents who want to help can fill out a form on HelpSLO's Facebook group or website.

Everyone involved said the importance behind the pantries is access.

Gillet said government, nonprofit, or faith-based food programs typically have specific pickup days and times. Some residents might not feel comfortable going to religious settings for assistance, federal programs often have a specific income requirements, and some people may be seeking assistance for the first time.

Little pantries are open at any time and any day of the week. And because no one is watching the pantry, both donors and recipients can be anonymous.