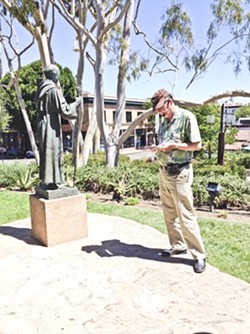 That part about me hasn’t changed. I love pizza with all the passion of a Teenage Mutant Ninja Turtle. But, what has changed is my interest in the history of this region. Before all the clothing boutiques, all the tourists, and all the endless designer soap shops, San Luis Obispo was a rough n’ tumble village replete with vigilantes, cultural tension, and bear fights. I wanted to know more. So, I gave up my usual plans for Sunday (ghost hunting, Netflix, pizza) and joined one of the monthly historical walks of SLO put on by the local Sierra Club chapter. The theme for this month: Mission-Era Emigrants and Gold-Rush Renegades. I like those words.

So, I show up at the designated place at the designated time. It’s two hours past high noon, I’m at the clock tower by the SLO government center, and I brought my mother. I ask her what character from Breaking Bad she would marry. “Walt,” she answers. We’re off to a good start. Only, we’re the only people there. It’s unnerving. If somebody doesn’t show up soon, this is going to be a very uncomfortable encounter with a stranger, myself, and a woman who routinely ogles Dr. Oz (that woman would be my mother).

The clock strikes two. Whew! We’re not the only people there. A solid group of 30 has showed up, in addition to the leader of the group, Sierra Club member Joe Morris. We go around the circle, introduce ourselves, and to my surprise, about 90 percent of the people live within the county borders. Why would they show up? Was there candy promised? Real answer: It seems like they were just genuinely interested in the area they lived in, its history, and the preservation of said storied past. All in all, that was pretty refreshing.

Joe begins to talk, and the afternoon jaunt is off. He starts with the Chumash, their culture and their customs. They knew the names of more than 200 varieties of plants, and lived relatively sedentary lives along the California coast for nearly 13,000 years before contact with the Spanish missionaries. I knew all this from college and the fourth grade mission projects, but hearing these facts amid the vexing clamor of sandal-footed shoppers seeking out rare, Ethiopian coffee beans and pre-torn skinny jeans was distressing.

I knew what came next for the Chumash. Everybody does. And, it’s not good.

We moseyed our way over to Mission Plaza, where Joe told us of Father Serra and his “civilizing of the Indians.” Now, this is a problematic phrase. I know that Joe, and everyone included, understood the problems with that phrase—the implied cultural hegemony, the religious and racial conquest that belied every colonial outfit. But, I stayed silent, just as Joe showed us the former Chumash burial grounds that abutted the vast mission they labored and died for, but never got credit for.

As we moved on, so did the chronology in Joe’s narration. As we neared the adobe houses built during the Gold Rush years, the group of 30 grew, as more and more people glommed on to Joe’s wild tales of the hardy vaqueros and rowdy Gold Rushers who settled this region between the dissolution of the Spanish mission system and the rise of white settlers like William Murray, who founded the Telegram Tribune in 1869.

An hour and a half into the walk, we neared the end. Joe points out the place, adjacent to the SLO History Center, where men used to hang other men for various, nefarious crimes. Joe mentioned that SLO was one of the last places to make the transition from gas lamps to electric light. He observed that while SLO had a violent, storied past, it’s “always been a very stable city. It hasn’t changed that much.”

And, that’s comforting. It’s a nice thought, which arose from a very nice walk with very nice people. But, as I looked at the Mission, with the myriad tourists carrying their goods up and down the steps painfully laid by a group of people whose stories I would never hear, I couldn’t help but ponder Joe’s comment. SLO has changed, but not for some. Some still aren’t able to tell their stories.

Jessica Peña is still thinking about Barbies and pizza. You can contact her at jpena@newtimesslo.com.