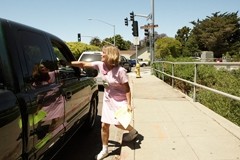 Sierra Vista Regional Medical Center nurses and nurses at other Tenet Healthcare hospitals protested on July 21 against cuts made to their sick leave benefits.

The nurses focused on cuts to their extended illness bank. Under a policy change, new Tenet employees will be unable to take paid sick leave without using time designated for vacations.

The protesters made reference to swine flu, which has sickened more than one million Americans and been declared “unstoppable” by the World Health Organization. The cuts, they say, may be putting not only the health of the nurses in jeopardy, but also the health of the patients they care for.

“It is a terrible time for these cuts to be made,” said Sherri Shoddard, a registered nurse of 22 years, who protested at the main entrance of Sierra Vista. “They are preventing us from not coming to work when we may be contagious.”

They argued there’s no economic reason for the benefit change because Tenet earned a $178 million profit in the last quarter alone.

He noted that nurses are scheduled to receive a 7 percent pay raise this year, and that the change will only apply to new employees.

“We’re looking for ways to preserve jobs,” he said.