Signs from the beyond?

In failing health after a fight with pancreatic cancer, James B. Lindholm left his position as San Luis Obispo County's top legal counsel in October of 2007. He died at age 64 on Jan. 31, 2008. His post has been filled on an interim basis in the meantime.

Yet none of those facts has seemingly prevented Lindholm from continuing to sign official county documents in the month after his death. 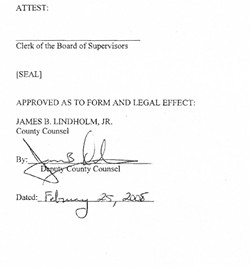 # Contained in the staff reports accompanying the March 11 Board of Supervisors meeting were at least two official resolutions that had been prepared for the board to approve bearing his signature.

He said while Lindholm left on sick leave in October, he didn't officially quit his job, "thus numerous items from his office would appear under his signature through that time."

Also, Edge said that some items that work their way to the board have been around a long time.

"So his name may continue to show up on documents for a while yet," he noted.