Signs of the times: Under threat of legal action, the Morro Bay Aquarium removed misleading signs 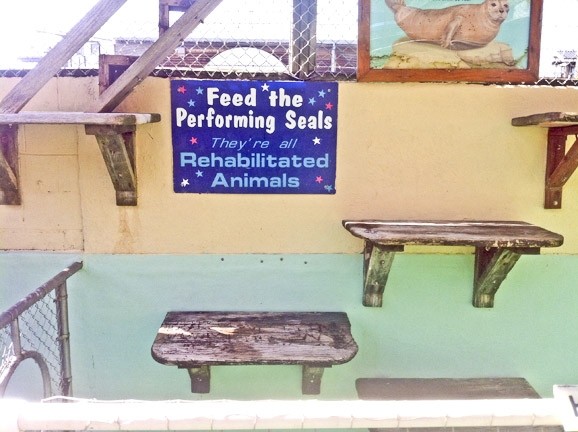 After receiving a cease-and-desist letter from the California-based Animal Legal Defense Fund (ALDF), the operators of the Morro Bay Aquarium have removed signage that potentially led visitors to believe seals and sea lions housed there are rehabilitated animals.

Though the aquarium has lacked a legal authorization to rehabilitate animals since the National Marine Fisheries Service revoked that right in 1995, signs posted on the walls of the sea lion and seal enclosures previously indicated otherwise. One such sign read, “Feed the Performing Seals. They’re all Rehabilitated Animals.” Another informed visitors that the animals were either injured or distressed, could not be returned to the wild, and donations were tax deductible.

As of press time, all those signs had been removed.

The change was made following a Dec. 6, 2013, letter from the ALDF demanding that the signs be removed because, “For nearly two decades the Aquarium has misrepresented the nature of its business, characterizing the facility as a rehabilitation center for distressed marine animals.”

According to the aquarium’s Marine Mammal Inventory Report, only one of the three California sea lions was rescued from the wild—Maggie, a 27-year-old sea lion was brought to the aquarium as a stranded pup in 1987—while the other two sea lions were purchased from Sea World in Florida. Smokey, the lone harbor seal, was also purchased from Sea World.

Asked about the removal of those signs, the aquarium’s manager, John Alcorn, said “they were old and they were no longer current; the information wasn’t current anymore.” He added, “They’re just little signs,” but declined to comment further.

In its letter, the ALDF accused aquarium owners of misleading visitors into believing the facility is a rehabilitation facility through signage, brochures, and statements to local media.

“While it is surely true that these marine mammals are distressed—suffering, as they do, from intensive confinement in your inadequate facility—they are in no way being rehabilitated,” wrote the ALDF.

More recently, the ALDF filed two complaints with the California Office of the Attorney General and the Internal Revenue Service alleging the aquarium is in violation of its 510(c)(3) tax-exempt status. Citing previous citations from the U.S. Department of Agriculture, lack of proper veterinary care, and what the ALDF claims is a questionable education function, the group asked for an investigation into the aquarium’s charitable purpose in both complaints.

“The Entity has not only displayed these suffering animals, it has displayed an utter disregard for federal law and established public policies, all while enjoying tax-exempt status,” the ALDF said in a letter to the IRS. “The U.S. taxpayers and fisc [sic] should no longer subsidize this suffering by turning a blind eye to the Entity’s charade.”

The Animal and Plant Health Inspection Service has conducted six inspections since March 2012. The aquarium hasn’t received any non-compliance notices since July 24, 2013, when it was cited for dry resting areas that were in disrepair.

In its cease-and-desist demand letter, the ALDF said the aquarium’s statements could have misled as many as 3.6 million customers into believing it was a rehabilitation facility, based on aquarium officials’ estimates that 200,000 people visit the aquarium annually, and it’s been 18 years since the aquarium lost its authority to rehabilitate marine mammals. It references visitor comments posted online as evidence that the misleading statements resonated with customers.

Though many of the signs had been removed as of press time, a banner hung above the street-facing front doors. It read, “Thanks for decades of community support!” The banner also included a partial quote from a May 2013 Tribune article: “a popular and important center of marine education, display & animal rehabilitation,” followed by, “a beloved institution.”

The full quote in that article was attributed to Morro Bay Harbor Director Eric Endersby, who said, “While its current configuration may be argued in terms of appropriateness in this day and age, it cannot be denied that the Tylers [owners Dean and Bertha] have dedicated their lives to the community and to operating a popular and important center of marine education, display and animal rehabilitation over the years.”

At the time, city officials were just beginning discussions about the future of the aquarium’s lease, for which the city is the lessor as with other properties that line the water.

The full quote of the second excerpt referred to public comments:

“Most called the aquarium a beloved institution and praised the owners for decades of hard work educating the public about marine life. However, others criticized the facility as antiquated and too small to house the seals, which are its main attraction.”

The Morro Bay City Council voted in 2013 to open up the lease to new bidders. All requests for proposal are due Oct. 16, though as of press time no one had submitted a formal bid, according to the Harbor Department.

Even with the signs removed, the aquarium files as a nonprofit under the name Morro Bay Marine Rehabilitation Center. In its three most recent tax statements, it has used the same language under the section marked, “Relationship of Activities to the Accomplishment of Exempt Purposes:”

“The aquarium has helped educate and make the general public aware of life in the ocean and the harm caused by man, other sea life, and adverse weather. Funds so generated are used for the rehabilitation of marine life. Due to mild winters during the last few years, funds have accumulated in the savings account for use in future years when storms and other severe conditions cause rehabilitation needs for otters and seals.”

The ALDF in its complaint to the IRS disputed the language, alleging that the aquarium doesn’t rehabilitate marine life or offer public education. In the letters to the Attorney General and IRS, the ALDF concluded that the aquarium “is nothing other than a dilapidating detention center for seals and sea lions.”

Jenni James, the ALDF litigation fellow who wrote the cease and desist demand, as well as both complaints, told New Times she was prepared to file a lawsuit if the signs weren’t removed, but the aquarium’s attorney, James Tavener Holland, contacted her one day before the Jan. 24 deadline. Holland declined to comment.

With the signs down, and complaints filed, James said she has no further plans to take action, but hopes citizens continue to put pressure on the aquarium for what she said were “inhumane conditions.”

Unless the aquarium owners successfully submit a proposal to extend their lease with the city, the existing lease is scheduled to expire in September 2018.

“I’m still really worried about those last three or four years,” James said. “The message is just that this aquarium’s been on everybody’s radar for decades, and it’s because people didn’t want to give [the owners] a hard time because they’re nice people, but nice people can do bad things to animals, too.”