Martinis and music, his way...

To get myself in the mood to write about Frank Sinatra this week, I’ve made a martini in honor of this weekend’s Swingin’ with Sinatra Martini Night at the SLO Little Theatre, the site of next week’s Art Bash! (See you there Saturday, Feb. 27).

Mmm. I can imagine it now (insert weird imagination music). I’m wearing a sharkskin suit and my hair appears to have been recently combed with freshly buttered toast. Chicks dig this because it’s the early ‘60s. I’m in Vegas at The Sands—private table, natch—and Sinatra is feigning drunken disorientation from the stage when he quips to the audience (while making direct eye contact with me …weird), “How’d all these people get into my room?”

Is this what it’ll be like at Swingin’ with Sinatra? I’m not sure, so I call Mary “Triple Threat” Meserve, who wrote, produced, and directed this bio-play. I don’t even have to ask Mary a question. She just starts talking. 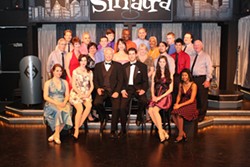 “All these other Legends shows I’ve written—the people died young, in their 30s or 40s,” she says. “Patsy Cline died in a plane crash, Nat King Cole died of lung cancer. But this guy? He lived forever! His songbook is so huge! I think there’s something like 50 songs in the show, but a lot of them are snippets. In some conversations, for instance, the actors might just break into singing a line or two. In one scene, Frank’s talking to Ava Gardner, and he sings some lines from ‘Luck Be A Lady,’ but I switch the lyrics around a little bit: ‘A lady doesn’t leave her escort! It isn’t fair! It isn’t nice. A lady doesn’t wander all over the bar and stare at some guy to entice.’”

Mary gets pretty excited about this stuff. She really likes the research part of her job, and she tells me about how Frank, “that skinny little guy,” was born a whopping 13 pounds, and he was stillborn because the doctor had to pull him out with forceps and mangled his face, and then something about a nurse dipping him in ice water and he “came to life crying.” Then there’s something about Frank’s mom doing illegal abortions for neighborhood girls and getting in trouble. It’s all in the show, she promises.

“Our Legends performances have become one of the must-see events on the Central Coast,” said SLO Little Theatre Executive Director Kevin “McDreamy” Harris. “Swingin’ with Sinatra is no exception; a great live band, fantastic performers, and some of the best music ever made. Legend performances feature the best local talent this area has to offer. Swingin’ with Sinatra follows the life of the legendary singer from beginning to end. I guarantee that even the biggest Sinatra fans will find out something new about this icon at our performance.”

I actually have a weird fascination with Sinatra that has nothing to do with my childhood fantasies about his daughter, whose boots were made for walking (hubba hubba!), and even less to do with that biography from Sinatra’s old valet, who claimed Frank’s frankfurter was a foot long and plumped when you cooked it. It’s bigger than his songbook! No, mine is more of an Ocean’s Eleven, everything comes easy, hey-I-get-to-sleep-with-Ava-Gardner sort of fascination, and it’s reflected in the Frank Sinatra section of my record collection.

If you stacked all my records on top of each other, I’d have a not-too-shabby 15-foot stack. But a full 6-inches—about half the purported size of Frank’s schlong—is all Sinatra, 29 albums in all, three of them double albums.

The man knew how to swing, and that’s what I plan to do this Saturday, this time with a real martini.