When people think of opera, usually one of two things comes to mind: The Looney Tunes episode where Bugs Bunny dresses in drag and does a pas de deux with Elmer Fudd, or a stuffy, pretentious person in fancy dress talking about the merits of Renata Tebaldi, à la Frasier Crane.

But regardless of what your preconceived notions of this particular genre of classical arts may be, Opera San Luis Obispo is on a quest to change them for the better, starting with its upcoming production of Aida this October. The performance will be sung in Italian, with supertitles in English for the audience. 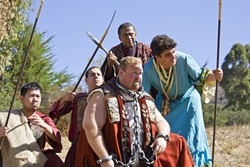 “Aida—and opera in general—is large,” Drew Silvaggio, the choreographer of Opera San Luis Obispo, said. “We have a cast of over 100, plus another 50 musicians in the pit. Daniel [Witzke] was the perfect choice to direct this tale. I think with Daniel’s direction, people will see how moving an opera can be. He doesn’t just want these singers simply standing onstage and singing. He wants to create a tense environment, full of mystery that these characters need to traverse to reach the end.”

Aida, written by Giuseppe Verdi and directed for Opera San Luis Obispo by Witzke, is set in ancient Egypt. Filled with political intrigue and a dramatic love triangle, it tells the story of the titular character, an Ethiopian princess who’s been captured and enslaved by the Pharaoh of Egypt. Aida and Radamès, an Egyptian military commander, fall head-over-heels for one another, despite the many obstacles that keep them apart. Complications ensue when Egypt declares war on Ethiopia, and the jealous daughter of the Pharaoh vows to get revenge against Aida for stealing the love of Radamès.

“What mainly drew me to this particular play was Brian,” Silvaggio said. “His energy is infectious, and the way he can bring people together to create these large scale productions is inspiring. He understands that one of the ways we can insure that professional productions are continually produced here on the Central Coast is through collaboration. It takes a special type of person to get this done.”

According to Aldaheff, , it’s this kind of large-scale collaboration between the different arts that will make the performance so memorable.

“It takes a very special community to do a real production of Aida. We’re going to do it the way Verdi would have wanted it,” Aldaheff said. “The costumes and the set design are all going to show what life was like in ancient Egypt. We’re going to have the serious components needed for the production as well: A real orchestra, a ballet, a huge chorus, and of course a perfect opera house. And Aida is big on voices, so superhero opera singers play the lead roles. You don’t want to just have any singers. You need singers with the right sound, and the right physical makeup in order to project over the chorus and especially the orchestra.”

Now for most people, the prospect of sitting through an opera that’s sung entirely in Italian may not sound like a popular way to spend the evening. But Aldaheff says it’s his mission to open up people’s minds.

“It’s about re-exposing the public to opera, and changing how people understand it,” Aldaheff said. “People forget how exciting opera actually is, so you have to be willing to remind them why what we’re doing is so cool. We’re trying to incorporate aspects of modernization and apply them to old forms of entertainment to speak the language of interest. Opera is like the Olympics of classical music. It represents the synergy of all the arts. There’s singing, there’s dancing, and there’s also a really good story being told. No other genre can do that. An entire universe just materializes behind the curtain.”

Intern Adriana Catanzarite learned everything she knows about opera from Bugs Bunny and Frasier Crane. Send her emails via Arts Editor Jessica Peña at jpena@newtimesslo.com.