Brett Dennen is the singer-songwriter we all need right now. I don't know a single person who's not sick to death of this pandemic, sick of its limitations on our lives, sick of the politics its created between us, and sick of not knowing what lies ahead. Dennen's newest album, See the World, understands those feelings in a profound way and wants to tell us it's going to be OK. 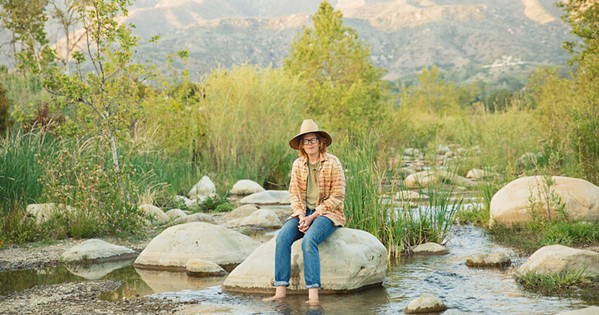 The track's a reminder that there's still a lot of life to live, but also that what's been happening can wear us down. On the third verse, Dennen sings, "It's hard to see what you're goin' through/ Just knowin' can beat up on you/ You'll spend some time in the waitin' place/ And the purest things may leave no trace/ Go up the mountaintop and shine/ I'll reflect it on my long decline/ I've gathered sunsets in my prime/ Now I'm plantin' trees I'll never climb."

Life goes on, and will go on, even though it seems like we're enduring one wave of trauma after another.

Numbskull and Good Medicine bring Brett Dennen to Cuesta's Performing Arts Center on Saturday, Dec. 4 (7 p.m.; all ages; $30 to $119 (VIP) plus fees at eventbrite.com). Proof of vaccination or a negative COVID-19 test 72 hours prior to show is required.

"I'm really happy to share it," Dennen said of his new album on his website. "I think it speaks to what we've all been through over the last year and a half. The songs began during a time when I was reevaluating my life. I've been fortunate to do this for more than 15 years, but I have doubts about myself sometimes. I started writing these songs while I was taking stock of my life. Where am I? What do I believe in? Where do I want to be?"

Questions a lot of us have been asking ourselves. Maybe find some answers this Saturday.

Also this week from Numbskull and Good Medicine, don't forget Hawaiian pop singer-songwriter Anuhea on Thursday, Dec. 2, at The Siren (doors at 7 p.m.; 21-and-older; $20 plus fees presale or $25 plus fees day of show at eventbrite.com) with Justin Kawika Young, Thrive, and Lea Love opening.

Also at The Siren, former Stray Cats drummer Slim Jim Phantom plays on Friday, Dec. 3 (8 p.m.; 21-and-older; $20 plus fees presale at eventbrite.com or $25 at the door) with The Belmont Kings opening. The Stray Cats spearheaded the neo-rockabilly movement of the 1980s. As of 2020, Phantom has also hosted Rockabilly Rave Up on Little Steven's Underground Garage on SiriusXM.

Independent country music star Aaron Watson comes to BarrelHouse Brewing on Wednesday, Dec. 6 (6 p.m.; all ages; $25 plus fees presale at eventbrite.com or $30 at the door). Forbes calls him "one of country music's biggest DIY success stories." For 20 years, he's hand-built his own career and toured relentlessly, and his album The Underdog was the first independent record in the history of country music to top the Billboard Country Albums chart.

Finally, rapper Afroman plays The Siren on Thursday, Dec. 9 (7 p.m.; 21-and-older; $20 plus fees at eventbrite.com). He started his career in eighth grade, handing out tapes to classmates.

"The first tape I made was about my eighth-grade teacher," he recalled in press materials. "She got me kicked out of school for sagging my pants, which was a big deal back then. So I wrote this song about her, and it sold about 400 copies: It was selling to teachers, students, just about everybody. And I realized that, even though I wasn't at school, my song was at school, so in a way I was still there. All these people would come by my house just to give me comments about how cool they thought the song was."

Meanwhile at the Fremont Theater ...

Country star Aaron Lewis and the Stateliners play the Fremont Theater on Saturday, Dec. 4 (8 p.m.; all ages; $49.50 plus fees at fremontslo.com). Lewis's latest, State I'm In, debuted at No. 2 on Billboard's Top Country Albums. He also reunited with his former hard rock band Staind and released, It's Been Awhile: Live From Foxwoods, last spring.

Lanco—on their Honkytonk Hippies Tour—plays on Tuesday, Dec. 7 (8 p.m.; 18-and-older; $25 plus fees at fremontslo.com), with opener Ross Ellis. They only have one album, 2018's Hallelujah Nights, but they've enjoyed two platinum-selling singles: "Greatest Love Story" and "Born to Love You."

Next Thursday, Dec. 9, Fremont has a really big show featuring Marc Cohn, Shawn Colvin, and Sara Watkins appearing together in concert (7 p.m.; all ages; $50 to $70 plus fees at fremontslo.com). Originally, Mary Chapin Carpenter was set to appear, but "due to unforeseen circumstances," she dropped out and was replaced by Watkins. These three are all amazing songwriters in their own right. Cohn has a Grammy for his soulful ballad "Walking in Memphis." Colvin won her first Grammy for Best Contemporary Folk Album with her debut album, Steady On, with two more to follow. Watkins was Nickle Creek's fiddler who's gone on to an amazing solo career.

Pianist Tanya Gabrielian joins the Cal Poly Symphony to present Gabrielian Plays Shostakovich on Friday, Dec. 3, in Miossi Hall in the Performing Arts Center's Christopher Cohan Center (7:30 p.m.; ages 5 and older; $10 to $20 at pacslo.org). Hailed as "a pianist of powerful physical and imaginative muscle" by the London Times, she'll perform Shostakovich's Piano Concerto No. 2, among other pieces.

Enjoy a Victorian-style holiday Champagne brunch with violinist Brynn Albanese at the Point San Luis Lighthouse this Sunday, Dec. 5 (10 a.m. to 2 p.m.; all ages; $75 plus fees general, $30 for children 3-12, $15 for infant seat at my805tix.com). A shuttle transports you to the historic site, and the event includes self-guided tours assisted by period-attired docents.

A Christmas Jazz Vespers concert returns to the historic sanctuary of First Presbyterian Church of SLO on Sunday, Dec. 12 (7 p.m.; all ages; $20 suggestion donation by calling (805) 543-5451; vaccinations and masks required). I'm telling you about this early because seating is limited to 100 and will likely sell out—on the bill is exceptional jazz act The Marshall Otwell Quartet, who will be joined by internationally acclaimed vocalist Inga Swearingen. They'll present original arrangements of classic holiday songs and seasonal music.

The ISA World Para Surfing Championship Hosted by AmpSurf is coming to Pismo Beach on Monday, Dec. 6, through Saturday, Dec. 11, and that means some great surfing action and live music from the Pismo pier. They expect up to 150 elite athletes from as many as 29 countries, and live bands will play two-hour gigs after the day's competition. The lineup is still being determined, but here's what we know so far: Dec. 6 will be classic rock, pop, and country act Jane's Gang from 4 to 6 p.m.; Dec. 7 and 8 TBA from 5:30 to 7:30 p.m.; Dec. 9 a screening of surf films on the plaza from 5:30 to 7:30 p.m.; and on Dec. 10, hear '60s-style surf instrumental music from Los Lot Boys. Δ