The singer-songwriter has a knack for boiling his lyrics down to their bare essence, sweeping away the clutter to get to the raw, naked, emotional core.

"You're talking with your mouth full of fury/ And finding ghosts inside the dial/ Running from the Armageddon jury/ Born to put your love on trial/ So darling, leave a key under the door mat/ I'm coming blind around the bend/ Soaked to the bone in revelation/ Begging you to get me lost again," he sings on his newest album, Big Bad Luv released earlier this year.

These somber laments have won him a legion of fans, in part because they get to the heart of the love/loss coin, which in Moreland's world flips endlessly.

"Well these angels in my eardrums they can't tell bad from good/ I lived inside these melodies just to make sure I still could/ And I cried all night even though I'm wrong/ Said honey hold me close make it feel like home/ Cause your love's bad enough to burn all night/ Sometimes love is a losing fight," he sings on "Heart's Too Heavy" off his 2015 album High on Tulsa Heat.

This Sunday, Aug. 13, Numbskull and Good Medicine Presents host John Moreland at BarrelHouse Brewing (6 p.m.; all ages; $15 presale at ticketfly.com or $20 at the door), part of his current world tour that's been making its way down the West Coast from Oregon. After this stop and one more at The Troubadour in West Hollywood, he'll travel to the Netherlands, Denmark, Norway, Belgium, and the U.K. before returning to the East Coast and back across the U.S. He doesn't return to his home in Tulsa until December. Several shows in Europe and the U.S. have already sold out, months in advance. It's a testament his perseverance and raw talent because visually Moreland—overweight with an unkempt beard—is an unlikely star.

In our looks-obsessed, shallow world, his talent shines bright beyond appearance. His musical heroes include Steve Earle, Guy Clark and Townes Van Zandt—all of whom should be flattered by his nod in their direction. His songs are truly a revelation. He's also willing to spend long stretches on the road.

Maybe Moreland's used to bouncing around. His peripatetic youth found him living in Texas, Kentucky, and finally Oklahoma all by the age of 10, when he first took up the guitar. His youth was spent playing in punk and hardcore bands, but he finally settled on his current sound in 2011 when he released Earthbound Blues.

His TV debut on The Late Show with Stephen Colbert brought the audience to a rare standing ovation. He's one of those artists that when you first experience him, you're in awe. Heartache never sounded so beautiful. He's a poet with a rusty-pipe voice.

Big Bad Luv is a much more rocking album than his previous three, but it's still full of the lyrical imagery that's brought him to the cusp of stardom, a place he never imagined being.

"I expected to just play in the corner of the bar and have people not really pay attention, make $100, go home and go to work the next morning, doing something I didn't like," Moreland said in press materials. "So, yeah, I didn't really expect to be here. But, then, on the other hand, I did. I feel like I'm good enough to be here. And I've always been confident, even when I probably shouldn't have been. I knew I was an outsider. I didn't have a lot of faith in the music industry to let me in. But I guess they have. To some extent. That's what I hoped for, but I wasn't sure that would be how it worked."

"I don't think I'm writing songs that are that much different," Moreland said. "It's always been a positive thing at heart, even if a song isn't sunshine and rainbows. At the very least my songs have been a way to exorcise negative feelings so that I can move on. And hopefully they provide that same experience to listeners. So that's what I'm still doing. I think it's a positive thing. I think this record, there's definitely a change in attitude, but it's the same point of view."

Good Medicine Presents also brings you the Johnny Cash tribute act Cash'd Out at Presqu'ile Winery on Saturday, Aug. 12, with opening act the Drive-In Romeos (doors at 5 p.m.; all ages; $20 at ticketfly.com)

Numbskull and Good Medicine team up to present hip-hop duo Atmosphere on their Welcome to California Tour with special guests ZuluZuluu, Greg Grease, and DJ Just Nine at the Fremont Theater on Saturday, Aug. 12 (7 p.m.; all ages; $29.50 presale at ticketfly.com or $33 at the door).

Rappers DJ Quik and Scarface—performing with a live band!—play a Numbskull and Good Medicine show at the Fremont Theater on Wednesday, Aug. 16 (7:30 p.m.; all ages; $32 presale at ticketfly.com or meet and greet tickets for $132).

Finally, go buy your tickets before they're gone for country stars Cody Johnson with opener Josh Ward, who play next Thursday, Aug. 17, at the Fremont Theater (7 p.m.; all ages; $22 presale at ticketfly.com or $25 at the door).

Two of rock's most storied performers are teaming up for a co-headlining tour that will make a stop at Vina Robles Amphitheatre this Wednesday, Aug. 16 (7:30 p.m.; all ages; $50 to $230 at vinaroblesamphitheatre.com). I'm talking Michael McDonald and Boz Scaggs, baby!

McDonald—a one-time member of Steely Dan—is perhaps best known for his work as singer and keyboardist for the Doobie Brothers. His soulful, falsetto vocals made hits out of songs such as "Takin' It to the Street," "It Keeps You Running," "Minute by Minute," and "What a Fool Believes."

Boz Scaggs hit it big on his 1976 album Silk Degrees, which yielded hits such as "Lowdown" and "Lido Shuffle," and he went on to score more radio gold with "Breakdown Dead Ahead" and "Jo Jo."

Scaggs' last record, 2015's A Fool to Care, found him traipsing across a variety of musical landscapes, from the New Orleans rumble of the title track to the social commentary of "Hell to Pay." This September, McDonald will be releasing Wide Open, his first new album since 2008's Soul Speak.

These two have been part of rock 'n' roll history since the '70s, and they can still deliver the goods!

Boatzart returns this Sunday, Aug. 13 (noon to 1 p.m.; all ages; free), at the Back Bay Café near the pier in Baywood. Cal Poly's Dr. Keith Waibel will lead his six-man clarinet group, and people are expected to arrive by both land and sea. "There will be a 5-foot-5-inch tide at 12 noon, and we usually get about 30-plus small boats and 200 people arriving by car, bike, or walking," organizer Stanley Stern said. Expect anything from ragtime to Broadway tunes.

Blistering hot blues, funk, and soul acts the Irene Cathaway Blues Band and Burning James and the Funky Flames join up for Hot Summer Soul, a red-hot show at Castoro Cellars this Saturday, Aug. 12 (noon to 6 p.m.; all ages; $20 presale at brownpapertickets.com or $25 at the door). L.A.-based Cathaway and her band, joined by local guitarist Dorian Michael, will bring the blues and soul; the Funky Flames will deliver the funk. As a special treat, soul and gospel band Burning, Bad and Cool—featuring members of both bands—opens the show. Bon Temps Creole Café will be serving up tasty Cajun food!

SLO County musical treasure Monte Mills and the Lucky Horseshoe Band will bring their classic country sounds to the Arroyo Grande Village Summer Concerts series on Sunday, Aug. 13, in the Rotary Bandstand (1 p.m.; all ages; free). A farrier and auctioneer by trade, Mills is an old-school yodeling cowboy! 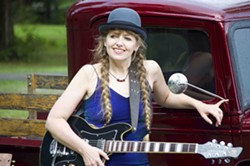 Nashville-based singer-songwriter Anne McCue will be bringing her rockin' and swingin' sounds to Sculpterra Winery this Wednesday, Aug. 16 (7 p.m.; $15; call 226-8881 for more info). McCue recently released Blue Sky Thinkin', her sixth studio album. She played guitar on Robyn Hitchcock's latest release and has recently produced albums for artists Emma Swift, Scott Miller, and Ellen Starski. Alt-country icon Lucinda Williams considers herself a fan, saying, "Initially, her stunning voice hooked me in. Then I got inside the songs. The first chance I got, I went to see her perform ... I was floored!" Central Coast native Aaron Porter will open the show.

Corey Leal—part of the SoCal revivalists Wish and the Well, a group inspired by The Byrds, Gram Parsons, and The Band—will tour through the county as a duo this week, starting with a show at Frog and Peach on Wednesday, Aug. 16 (10 p.m.; 21-and-older; free). Expect soulful and cosmic country tracks from Darling, Darling, Wish and the Well's debut record. These are sparse but beautiful songs that blend blues, soul, and quintessential California rock sounds. See Leal again at Frog and Peach on Thursday, Aug. 17 (8:15 to 9 p.m.; 21-and-older; free), and at Last Stage West on Saturday, Aug. 19 (6 p.m.; all ages; free). "I grew up on soul and doo-wop," Leal said in press materials. "That focus on hooks and melody has always stuck with me. I try to write happy melodies with heartfelt and sentimental lyrics. You know, really depressing shit." Δ