Trevor Hall is sort of a mix of Jack Johnson and Matisyahu—laid back, spiritual, with a little rap and a little reggae mixed into acoustic singer-songwriter fare. He's got a dusky tenor voice and lyrics that explore the mysteries of life, service to others, and living in the moment. Pretty solid messages to live by!

The Southerner started his musical life at age 11 playing harmonica with his father among the weeping willows of South Carolina, writing his own songs by grade school and performing them locally.

By 16, he recorded his first album and left the South the following year to study classical guitar at Idyllwild Arts Academy, an international boarding school in LA, where he discovered yoga and Indian (as in India) spiritual practices. In his senior year, he signed a record deal with Geffen Records. One of his songs made its way to the Shrek the Third soundtrack, and soon he was opening for Steel Pulse, The Wailers, Jimmy Cliff, Michael Franti, and others.

His "quick rise on the scene, however, was ripe with challenges that conflicted with his spiritual life and devotional practice," according to his bio. "In order to parallel his life's path with the messages in his music, Hall moved into a traditional Hindu ashram in Southern California in 2008. When not on tour, he lived as a monk and devoted his days to spiritual practice and service. His involvement with the temple affected his music and his music quickly became his practice."

Today his sound mixes acoustic rock, reggae, and Sanskrit chanting, and he still uses "donations collected at his live shows to help support an ashram in Allahabad, India, the home of his Guru, where underprivileged and orphaned boys and girls are given the chance at a better life and a traditional Vedic education."

He's made several pilgrimages to India and continues to mix his religious practice and music into a powerful symbiosis of sound spiritualism. He's recorded seven studio albums, the previous four on Vanguard Records, but his newest—The Fruitful Darkness—will be his first independent release, and he's funding it through a Kickstarter campaign.

"There have been many hurdles and triumphs along the way," Hall reflected in press materials. "This album conveys the deep vulnerability of journeying through the unknown, as opposed to playing it safe."

The album is being released unconventionally, in three-song installments on specific lunar dates, "with the intention to buck the trend of fly-by-night releases and hold the conversation for a whole year."

Get your bliss on, people!

One for the road 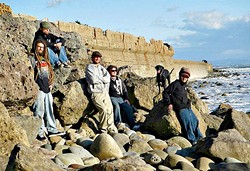 After this week, Numbskull and Good Medicine Presents will take a break until early December, so their last show this month is Thursday, Nov. 16, when the Thankful for Life Tour comes to The Siren with reggae acts Synrgy and SensaMotion plus special guests Tripped Up (7 p.m.; 21-and-older; $8 presale at ticketfly.com or $10 at the door).

Soul-rock-reggae act Synrgy is a touring machine known for high-energy performances, hooky tunes, and a mix of roots, reggae, and soul crooner styles. "Add some rock steady/ska-esque influence, and some contemporary tones, and you have yourself a good idea of what to expect from Synrgy," according to their bio.

If you love jazz sax, you're going to go apoplectic for Juno Award-winning jazz saxophonist, composer, and arranger Allison Au, who's just amazing. She and her quartet recently released Forest Grove, filled with Au's lush, clean compositions that flirt with a mix of various genres, sounds, and influences. I wouldn't call her avant-garde or especially experimental; instead, she pays homage to what straight-ahead jazz is all about—collaboration and improvisation to create a synergistic sound with a group of musicians who've learned each other's ins and outs.

Au, who was "born to a Chinese father and Jewish mother, and raised in the multicultural metropolis of Toronto," is in the midst of a 17-city U.S. and Canadian tour.

"Exposed to a wide array of musical styles, she was captivated by the unhinged freedom of Jazz," according to her bio. "Jazz became Allison's lab for self-expression, exploration, and musical experimentation."

Don't miss your chance to see this rising star and hear cuts from this amazing album. It's really something special. 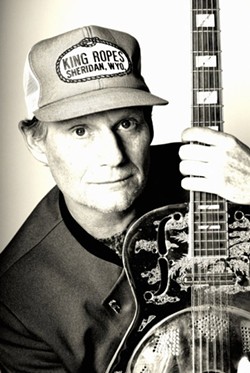 With a resonator guitar in his hands, a kick drum at his feet, and a harmonica around his neck, Crosby Tyler has all he needs to bring his back porch Americana bluegrass roots sounds to an audience. With his rustic voice, he sings about "Social misfits, addicts, railroad kids, circus clowns, outlaws, and truckers [who] are placed in present day tongue-in-cheek narratives and self-explorations, pounded out in a one-man band assault," according to his bio.

Tyler's released several album so far, including 10 Songs of America Today, Lectric Prayer, and his newest, The One Man Band Rebellion, with a sound "influenced by roots music from the present day to the early 1800s," songs that "will transcend you as if you were at a campfire sing-along with Stephen Foster and Charles Bukowski."

He says it took three years of gigging to master his one-man band sound and even longer to record it properly.

"I thought it was going to be a piece of cake but everyone is so conditioned in overdubbing, looping, and effect-driven styles, that something so simple and raw could be so puzzling to reproduce sonically. Fortunately, good friend Jamie Bridges came to the rescue. Bridges is a top-notch live sound engineer as well as recording and many years of major label productions, and voila the process began ... everything live, no over dubbing. Just pick the best take. The result, a 14-song allegory highlighting the underbelly of society."

A gal with a guitar

The music business is a bitch, and people who stick with it are freakin' heroes. Take Chelsea Williams, for instance. Dripping with talent, the California singer-songwriter should be a big name but instead she's the hardest working street busker in history.

Yes, she's had some success like appearing on The Today Show, opening for the likes of the Avett Brothers and Dwight Yoakam, and singing duet with Adam Levine in Maroon 5's video for "Daylight (Playing For Change)." Yet, have you ever heard of her?

She's sold 100,000 copies of her independently released CDs on the Third Street Promenade in Santa Monica, including one to Sheryl Crow, but her first record deal fell apart when she refused to be molded into a pop princess. Recently, she was signed to Blue Élan Records, which gave her total creative control, and the result is the excellent Boomerang. The indie folk artist reminds me a bit of Tracy Chapman. She's got a voice you won't soon forget. 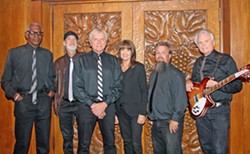 Unfinished Business returns to Paso's D'Anbino's Tasting Room to reprise their popular rock nostalgia shows. On Friday, Nov. 17, check out The Best of The Beatle Years, a tribute to The Beatles and the British Invasion (8 p.m.; 21-and-older; $15 at 227-6800); and on Saturday, Nov. 18, the band returns for their '60s American Rock and Soul Revue (8 p.m.; 21-and-older; $15 at 227-6800). Enjoy some great wine, Miss Odette's Creole Kitchen food (from 7 to 9 p.m. serving appetizers), and of course dancing to music by the likes of The Rolling Stones, The Animals, The Zombies, The Hollies, The Dave Clark Five, and The Kinks on Friday, and music by the Beach Boys, Creedence Clearwater Revival, The Doors, Steppenwolf, Tommy James and The Shondells, Ray Charles, Wilson Pickett, Marvin Gaye, and The Temptations on Saturday.

AC/DC was the defining act of '70s hard rock, a band with so many awesome, unforgettable songs such as "Back in Black," "Thunderstruck," "Highway to Hell," "You Shook Me All Night Long," "T.N.T.," "Hells Bells," "Shoot to Thrill," "For Those About to Rock (We Salute You)," "Dirty Deeds Done Dirt Cheap," and so many more. High Voltage—A Tribute to AC/DC recreates those incredible rock anthems with startling accuracy. See for yourself this Saturday, Nov. 18, when the band plays the Pour House (8:30 p.m.; $10 at brownpapertickets.com). The good news is the return of the band's original vocalist Kelly Atwell! Prepare to rock!