Zane Carney may have started his entertainment career as an adorable child actor on the TV series Dave’s World (1993-1997) and the film My Giant (1999), but these days he’s fully submerged in the singer-songwriter/guitar god world. 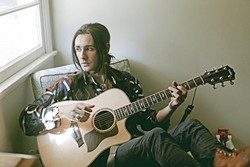 He’s well known for his work with John Mayer, the band CARNEY, and Broadway’s Spider-Man: Turn Off the Dark. His guitar skills have also landed him work alongside Stevie Wonder, Keith Urban, and Roy Hargrove; as well as opening gigs for U2, Fergie, and The Black Crowes.

U2’s Bono called Carney “the best guitarist in NY and LA.” He hooked up with Mayer, who hired him after seeing his fiery online performances. But he’s more than just an ax-slinger extraordinaire—he’s also a compelling songwriter with a really engaging voice (think Jeff Buckley). His songs tend toward the visual and tender, with melodies rooted in jazz, blues, and pop.

He’s also got a weird sense of humor. Check out some of his tour diary entries online. If you want the full experience, however, you’ve got to see him live, where his inherent charisma is unstoppable. 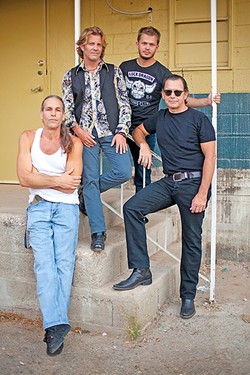 Castro’s slick guitar work and soulful voice are evident from the first track on his new album Method to My Madness, which features a dozen engaging songs, all original save B.B. King’s “Bad Luck” and “I’m Qualified” made famous by Muscle Shoals artist Jimmy Hughes. (Well, technically, Clarence Carter’s version was more famous, but I like Hughes’ version best). In any case, Method to My Madness is a great big city blues record.

Castro, who’s performed for 40 years (most famously with The Dynatones) but only began recording his solo original stuff in the mid-’90s, is a six-time Blues Music Award-winner who’s played thousands of shows before hundreds of thousands of fans.

“My main objective when making a new album,” Castro said in press materials, “is to do something different from before. I’ve always been a blues guy; it’s what I’m meant to do. But I’m always listening and reacting to what’s going on in the outside world, experimenting with my guitar tone and my songwriting approach to constantly keep my music fresh. In the end, though, my brand is on every song.”

That’s for sure! Castro’s sound is unforgettable. Don’t miss this B.B. King Entertainer of the Year award-winner.

“With the new album,” Castro added, “I was trying to get back to my basic ingredients: blues and soul. I went for the energy of connecting with my band. We kept everything raw, capturing the feeling of playing live. I’m not about being perfect; I’m about being real.” 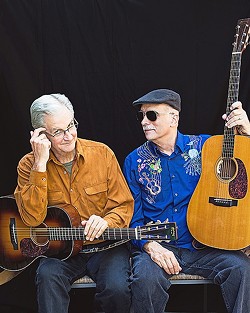 The Red Barn Community Music Series continues its parade of great performers with Jim Kweskin and Geoff Muldaur in concert this Saturday, Dec. 3 (5 p.m. potluck, 6 p.m. concert; all ages; $20 at the door).

They got their start in the ’60s playing in the Jim Kweskin Jug Band—an important band during the folk revival period—and they’re currently touring in support of their newest CD Penny’s Farm. Kweskin is a ragtime blues picker who adds in pop and jazz chords, and Muldaur worked with Paul Butterfield, his then-wife Maria, Bonnie Raitt, Jerry Garcia, and others.

This ought to be a great, down-home show. Bring a dish to share, a beverage of your choice, and join the fun.

Santana’s lead singer, Andy Vargas, performs at Nipomo’s Gold Rush Cantina this Friday, Dec. 2 (9 p.m.; all ages; $15 presale at latinrockinc.net or by calling 925-3500, or $20 at the door). Vargas has toured the world with Carlos Santana nearly 20 times now, but he’s also a solo performer who’s crafting his own music style that he calls “souleros.” Think a mix of traditional Spanish/Latin ballads (aka boleros) with R&B and soul. Alex Nester, a singer/keyboardist from Salvador Santana’s band, will join Vargas.

L.A.-based singer-songwriter Vanessa Silberman will play an acoustic show this Saturday, Dec. 3, at Linnaea’s Café (7 p.m.; all ages; pass the hat). She recently released her self-titled debut EP, and will perform with Jimmy Dias (of The Love Dimension). Her EP features energized guitar work and songs and vocals ranging from folk to New Wave to punk to hip-hop. She’s got a little PJ Harvey thing going on.

The always incredible Gypsy jazz, swing, folk, tango, and wild classic act Café Musique returns to the Steynberg Gallery this Saturday, Dec. 3 (7:30 p.m.; all ages; $15 tickets by calling 547-0278). Between their stunning musicianship, diversity of material, and synergy produced by the various members, it’s hard to find a more wildly entertaining act than these guys!

The SLO County Jazz Federation proudly presents “A Night at Birdland,” an encore performance by the Dave Becker All-Star Quintet, this Saturday, Dec. 3, in SLO’s Unity Concert Hall (7:30 p.m.; all ages; $20 general admission; $15 for Jazz Fed members; or $10 for students in advance at brownpapertickets.com or Boo Boo Records). Expect “straight ahead, full throttle jazz reminiscent of the Horace Silver and Art Blakey groups of the Blue Note era,” according to organizers. “The front line is formed by multi-reed player Dave Becker and Bob Bennett on trumpet; Marshall Otwell (piano), Dylan Johnson (bass), and Darrell Voss (drums) form the stellar rhythm section.” Their last show sold out, so don’t lollygag.

Two local jazz treasures, husband and wife Charlie and Sandi Shoemake, will perform a fundraising concert for the Central Coast Jazz Institute this Sunday, Dec. 4, in Painted Sky Studios (6:30 p.m.; all ages; free with tax deductible donations accepted; call 927-0179 for reservations as seating will be limited). Charlie’s among the top jazz vibraphone players in the U.S., and Sandi is a wonderful jazz vocalist. Enjoy this one for a great cause!

Have yourself a merry shamrock Christmas this Tuesday, Dec. 6, when the Clark Center presents An Irish Christmas featuring a team of Irish traditional musicians, dancers from the Kerry Dance Troupe led by Scott Doherty (of Riverdance and Lord of the Dance fame), and the Kerry Irish Productions voice squad (6:30 p.m.; all ages; adults $48, seniors $40, children and youths $36, available by calling 489-9444 or online at clarkcenter.org).