Local courses aren't seeing golfers like they used to, and taxpayers are footing the bill

When Mary and Doug Piirto moved into their home in Atascadero nine years ago, part of the appeal was the nine-hole golf course around which the new subdivision was built. But for the past two years, the course has gone unused. The developer, Kelly Gearhart, told residents at a recent community meeting that he'd been losing thousands of dollars a week on the course due to a dearth of golfers. A security fence has been put up. The grass is dry and brown in patches.

"We were assured that there would be a golf course there, that 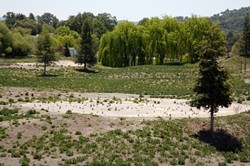 # an open space would always be there. It's kind of a stark contrast now. It gets worse each day that goes by," Doug said.

"It's all dried up. It looks awful. It's horrible," Mary added. "I know the builder is trying to restore the golf course to something that's at least presentable. Luckily we live on the side that's oak trees."

Jamie Kirk of Kirk Consulting, Gearhart's planning representative, said that community meetings in April yielded cooperation from neighbors and progress in efforts to move forward with restoration concepts. Another neighborhood meeting is in the works for when the next stage of plans is completed.

Gearhart, the Piirtos, and their neighbors aren't the only ones suffering the effects of a golf slump.

Nationally, the number of courses has declined for the first time in 60 years. Locally, all three county-run courses are in need of maintenance and have seen a 20 percent decrease in play since 2000, according to a March 27 county staff report.

In response, county officials have turned to taxpayers for subsidies.

Although the county golf program has been self-supporting for the last 25 years, the county Board of Supervisors on May 8 approved spending up to $100,000 from the county's capital improvement fund to move toward replacing an aging, badly leaking water line at the state-owned but county-run Morro Bay Golf Course. Even that was less than the $500,000 course officials were seeking for the emergency repairs, but supervisors suggested raising course fees to get the rest of the money.

Supervisor Katcho Achadjian pointed out, "We have 100 children in the community who can't get dental surgery. For us to give half a million dollars to folks who have money and leisure I have problems with that."

The Morro Bay decision comes just weeks after the board approved a $350,000 payment from the general fund for improvements to its Chalk Mountain course. Supervisor Bruce Gibson called it a "one-time deal."

When county staff asked for approximately $2 million in continuing general fund support for maintenance at the other county courses, Gibson suggested they look for creative alternatives.

"I'll be watching what's going on," he said in an interview after that vote. "We're putting the $350,000 into Chalk Mountain and we'll see what happens in a year or so if rounds go up or down. And then another question is, do we put more money into golf?"

Another way to phrase that question might be, if the national declining trend in golf continues, can subsidies actually turn countywide golf around? Golfers and golf professionals, including Chalk Mountain general manager Joel Clay, aren't losing hope yet.

"I don't think it's going away. I mean, they've been playing golf for 400 years," Clay said. "I think the number of golfers isn't going to change. The number of rounds could. That could go up or down. It's unknown."

Clay reported an increase in play this year even before improvements.

"I think the future looks pretty good," he said. "It's going to be a lot of work."

In his 21 years at the course, Clay said he's seen golf rise and decline. The '90s in particular were a prosperous time for golf nationally, with one new course built every day in 1999.

But all those new courses entering the market, along with courses turning public, is actually part of the problem, causing what County Parks Director Pete Jenny calls "diluted" numbers at each course. Jenny believes the total number of rounds played is the same as it was 10 years ago, but that number is spread out over more courses now.

"We have an over-supply of golf courses," Festa said. "We have more courses than players right now. It's gonna take a while for that equilibrium to settle out."

Another suspected contribution to the decline in golf is a general change in the American lifestyle.

"The thing we hear constantly is time. We all see it in our lives. We all multitask. It's hard to find four, five hours," Jenny said. "We don't have an easy fix to multitasking."

Course maintenance also plays a role. If people aren't playing at the county courses, they might be playing somewhere else. Jenny said maintenance is one thing that could improve the number of rounds played at county courses.

"Once you do that we can go maybe another 25 years [without General Fund support]," he said.

Still, it's unclear whether there will be enough golfers in the future to support all the courses. Golf is a social sport with rules and regulations as opposed to an extreme sport. It may not draw as many players from the generation of cell phones and LCD screens as it did from generations past and passing.

"Probably for the foreseeable future it is not going to be as popular as it was 20 years ago," Jenny said. "Skate parks are cool, but you reach an age where you're not going to do that anymore."

"I actually don't mind playing with rich white guys," she said. "You go out on the course and you learn so much about [people]. If you really want to know someone, go out golfing with them."

Contact Intern Lauren Zahner through the editor at rmiller@newtimesslo.com.