Standing between grapevines at the base of a hill, Chamisal Vineyards Winemaker Fintan du Fresne kneels down to pick up some top soil.

"It's dark and if you go down a bit, it becomes hard and you can squish it," he says.

This bloc of vines used to be contiguous, across the depression in the land to the top of the hill. It's now separated by a road. 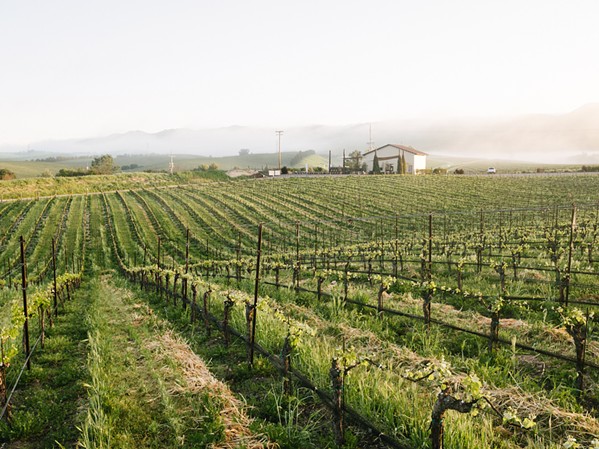 Brushing off his hands, du Fresne explains that the clay below the topsoil holds on to moisture, so these vines can be watered later in the year and for longer periods of time. As the land starts to slope upward, the soil type changes, becoming gravelly and loose. Water drains out of it quickly, so the grapes on top of the hill need less water more frequently.

Du Fresne says the goal is to cut water use in half. It's just one of the things Chamisal is focused on to keep its practices sustainable. The vineyard is one of 280 that have been Sustainability In Practice (SIP) Certified since 2008. Celebrating 10 years of third-party vineyard sustainability assessments in 2018, SIP introduced the winery certification program in 2016/2017. Chamisal and Niner Wine Estates in Paso Robles are currently the only two wineries with the SIP stamp of approval.

Chamisal and Niner operate under similar philosophies. Sustainability is a way of life, and SIP certification is just proof that they are doing things right.

"I think farming sustainably should be mandatory," du Fresne says. "If there's one thing that's important to what we do, it's the piece of land we're on. ... We've got to do everything we can to protect it."

An independent, third-party assessment that does regular audits is important, though, according to Andy Niner, president of Niner Wine Estates.

"We would probably operate similarly regardless, but what SIP does for the consumer is invaluable," Niner says, standing outside of the LEED Certified winery along Highway 46. "You need a third party that isn't biased ... to put a stamp on it."

That stamp comes with a culmination of 25 years of continuing to change and keep pace with best practices, according to SIP Certified Manager Beth Vukmanic Lopez. In 1996, a group of farmers got together and wrote the first self-assessment for vineyard development, looking at how the vineyard treats its people, the land it's on, and whether it is a viable business.

As "green" claims started to flood the marketplace, the farmers reformatted the self-assessment so it could work for a certification.

"If they were going to claim being sustainable for wine grapes, they thought, 'We better come up with a set of rules,'" she said.

SIP launched its pilot program in 2008 with 3,700 acres of vines between Monterey and Santa Barbara counties. Now, there are 43,000 acres of SIP Certified vines in California and Michigan. The organization has certified more than 36 million bottles of wine (each with at least 85 percent of the grapes sourced from a SIP Certified vineyard), and a few more wineries are interested in getting their winemaking operations certified.

"The whole idea behind that is that sustainability doesn't stop in the vineyards," Vukmanic Lopez said.

Sustainability isn't easy, as Niner Winemaker Molly Bohlman, who helped write the winery certification program for SIP, can tell you.

"It took me about a year to put all the documentation together, but the certification is worth it," Bohlman says of the work she put into getting Niner's winery SIP Certified.

Standing on the third story of the gigantic, cool, cement-walled winery, she says the certification looks at everything from water and energy use to cleaning solutions, windows, and low-flush toilets. But sustainability isn't just about reducing resource use. Andy Niner says sustainability is a plan for the future: treating employees in a way that makes them want to stick around, treating the land in a way that enables it to last, and growing in a way that can be passed on to the next generation.

"We're in it for the long term," he says. "I want to pass this business on ... and if you're not constantly figuring out how to do things better, you're not going to be around." Δ