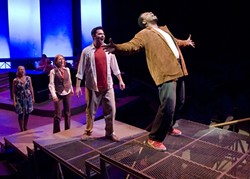 PCPA promises one thing with its genre-bending production of Songs for a New World: a new and provocative universe. Or, at least, the play’s creator, Jason Robert Brown, made this promise implicitly when he titled his 1995 production.

But Brown fails to deliver on this promise and even with the talented cast that PCPA consistently assembles, there’s no salvaging a work that comes across as Sesame Street for adults. Or an entire rack of inspirational bumper stickers clubbing you in the forehead to a rhythm established by four talented onstage musicians. That’s not to suggest there aren’t moments of poignancy; they’re just overwhelmed by all the other moments trying desperately to be meaningful.

Songs for a New World features a cast of four, prosaically titled Woman 1 (Karin Hendricks), Woman 2 (Melinda Parrett), Man 1 (Melvin Abston), and Man 2 (Jerry Lee). As their names suggest, these figures are intended to represent everyman, though it comes across as more of a ’90s sitcom; you’ve got your sassy businesswoman, the always-smiling pretty girl, the yuppie white guy, and the token minority figure.

The performance unfolds as musical vignettes. The audience is supposed to come away with a sense of shared humanity, conveyed through songs about love and the importance of taking risks and a few about war, the prison system, and deriving strength from the Lord. Shockingly—from an agnostic’s perspective—the only songs that really ring soulful and true are the gospel pieces, because Lee’s incredible voice invests them with feeling.

The first song, begun with a solo by Hendricks, is “The New World.” Hendricks sings that “a new world calls for me to follow…a new world waits for my reply.” Later, Hendricks is inexplicably going to carry a blanket bundled to represent a baby and call on the Lord for strength, literally crying out “I am not strong enough … am not strong enough.” She sings about not being afraid of anything, then later about trying to pretend she was happier without love. “God knows it’s easy to run, harder to stay and fight for the things you believe,” she sings. And later still, she sings that, “If you don’t try then you never get to fly.”

Call me a cynic. Call me jaded. But inspirational bumper stickers have never had the ability to touch the recesses of my soul. There are better, cleverer ways to be uplifting and the lyrics are just too literal. Hendrick’s voice is beautiful, and I know from past shows she is a talented actor, but the role of starry-eyed girl encouraging the audience to step bravely toward the future is too simplistic.

Then there’s Woman 2, or Funny Woman, as I began to call her during the show. She first appears as the comedic relief in a song that has her edging tightly around the piano, preparing to jump to a dramatic death as a bid for attention from her husband Maury. Later, with “Surabaya-Santa” she’s a sexy Mrs. Claus with a red feather boa telling off Nick for being a lousy husband. Nick is Maury all over again, with a wife demanding attention she’ll probably never get. Except that one of her parting shots is “have fun with all the little boys along your route,” which is quite possibly the only provocative and culturally relevant thing said during the entire performance.

Parrett also sings—comically at first—about the men she passed by because she preferred yachts and champagne to experience and adventure. Predictably, once she has found a man with yachts and champagne she is dissatisfied and yearns for challenge and change. Chalk that up as Life Lesson No. 57 in Songs for a New World. But strangest of all, she’s suddenly a flag maker in America’s battle for independence, 1775. I’m not sure if Brown suddenly decided he wanted to give his performance a patriotic edge, but it feels out of place in his bid to depict contemporary slice-of-life vignettes.

Man 1 has the most difficult lot of all; he must sing, again and again and yet again, about love. First, he’s rhapsodizing about how “she smiles and you’ll stay forever, she screams and that’s the price you pay,” encouraging men, good-naturedly, to stick out those unfortunate times when women are screaming for no apparent reason because men are clueless and women are unsolvable riddles. Sitcom. Next he’s a man who “wasn’t quite prepared to take that risk and maybe lose” so he bails on his fiancée, hits the road ever so poetically. And finally, he and Woman 1 are holding hands, staring into each other’s eyes and singing that they’d give up everything to be together once more.

Then there’s Man 2, who is something of a complicated figure. He’s the show’s only minority character, and sings about his father abandoning him when he was a child, about his friends from school all winding up incarcerated or dead, and about being incarcerated himself—all while wearing a hoodie that says Harlem on it. Really. Now, Lee’s voice is amazing. There’s no doubt about that. When he sings about his incarceration in “King of the World” there’s a moment at the end when his defiance melts away and he’s left vulnerable, claiming “I’m … I’m … at least I used to be.” It’s beautiful, a perfect moment really, in a show that’s imperfect. And when he starts singing, “There’s a new world just across the river,” it’s impossible not to wish that there really was, both for his own sake and yours. But the reality is that there’s no new world here.

After telling the audience about his deadbeat dad and the tragic fate of his classmates he insists, “You don’t know me.” But we do know him. We’ve met him in countless television shows, books, and movies. He’s a stereotype employed frequently. And in an era when Barack Obama is president, it feels outdated.

I understand, I think, why this piece was chosen. The four conclude with “Hear My Song,” about their words carrying hope for tomorrow, for a brighter future. Which makes Songs for a New World PCPA’s we’re-in-a-recession-and-things-look-tough-and-your-house-has-been-forcelosed-and-the-teachers-are-getting-laid-off-and-our-education-system-is-in-the-toilet-and-our-climate’s-getting-hotter-but-buck-up-chap performance. But it doesn’t take being told to cheer up to feel better. Any one of PCPA’s regular season shows is a powerful tonic against depression and fear. This just tried too hard.