John Laird, 68, sits at a coffee shop off Foothill Boulevard in San Luis Obispo, enjoying a drink and observing the people walking by.

He just wrapped up his eight-year term as secretary of the California Natural Resources Agency under Gov. Jerry Brown at the beginning of the year. But he's not slowing down any time soon.

"I feel like I'm at the top of my game, and I don't want to walk away. I want to take the skills, the knowledge, and the commitment I have to these issues and serve in the Senate," Laird told New Times. 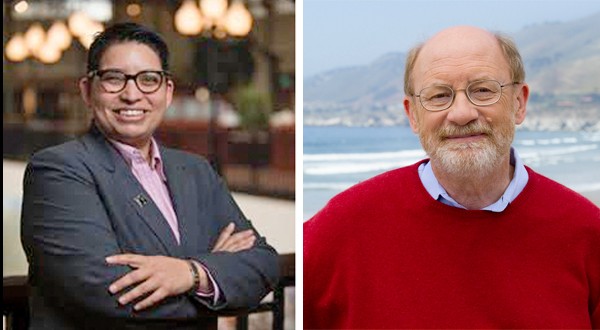 Laird, a Democrat, has been thinking about these issues—water resources, climate change that's affected the state's fire seasons, and affordability—for a long time. A UC Santa Cruz graduate, he studied politics with an emphasis in political theory. His senior thesis was on water.

"I wrote it on the history of water development in California, and I got way into it. And at the time, I never realized that I would never be far from water policy my whole career," Laird said.

He's running for the California Senate's 17th District seat currently held by Sen. Bill Monning (D-Carmel), who's finishing out his term next year.

Laird served as a member of the State Integrated Regional Water Management board, taught environmental policy at UC Santa Cruz, was elected as Assembly member for the 27th District in 2002 and served three terms, and was a Santa Cruz City Council member for nine terms and the mayor for two.

Laird said he was also involved in two state water bonds in 2014.

"It's about making sure there's money available, making sure the policy fits the region, not just other regions, and then doing the on-the-ground advocacy when actually applying for money," Laird said.

In terms of fire preparedness, the candidate has had many conversations with the Cal Fire chief in Santa Cruz County before and after the Paradise Fire and Laird's also learned that there isn't a budget for fire that is climate consistent.

"It's the issue of a complete change in climate that makes us more susceptible," he said.

With his overall knowledge and understanding, Laird said he feels he's prepared to explore the district's options, preparedness guidelines, and opportunities for long-term investment.

Laird's résumé also includes being the first openly gay mayor in U.S. history, and he continues to advocate for the LGBTQ community.

Another member of the LGBTQ community is also on the District 17 candidate list: Maria Cadenas.

Also a Democrat, Cadenas has worked hand-in-hand with the agriculture, tech, government, and nonprofit communities as the executive director of Santa Cruz Community Ventures.

"My entire career has really been about service and advocating for communities, especially those that have the least," she told New Times over the phone.

Her advocacy background includes: secretary for the Department of Consumer Affairs' Podiatric Medical Board of California, the senior community involvement manager for Driscoll's, executive director for the Cream City Foundation, associate director for the ACLU of Wisconsin, and as a consultant for Accenture.

Born in Mexico, Cadenas and her family immigrated to California when she was about 11 years old.

"So I know firsthand what it means to both struggle and also make it through with the help of neighbors and friends," she said.

That help is the focus of her current work as she aids agricultural workers, farmworkers, and small business owners. She said the working class is struggling to make ends meet and enjoy their families at the same time.

If elected, Cadenas said she wants to focus on advocating for affordability. Right now, she said, there's a level of displacement in the communities she serves because people can't afford to live where they work.

"It not only prevents local economic development but actually harms us as communities and as neighbors. There's work that needs to be done to understand the type of housing that we need, not only for today but 10 years from now," she said.

In order to get a grasp on what that looks like, Cadenas wants to take into account the local culture and resources that already exist.

"What I can promise the voter and what I can commit to, and what's been my entire life's work, is listen to residents and advocate. Make sure our approach to housing is focused on our shared humanity and experience to ensure that we can all thrive," she said.

Another issue Cadenas feels strongly about is immigration.

She believes that a state-level policy preventing detention centers is key to minimizing the harm and public health impact being felt by communities all over Northern and Central California.

She wants people to know it's important to have voices in the Senate that support everyone in the community.

Staff Writer Karen Garcia can be reached at kgarcia@newtimesslo.com

Correction: This story is updated to reflect a change in the number of candidates running for District 17. There are five candidates not six.