Six-story buildings in downtown SLO get three thumbs up 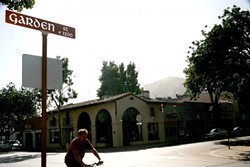 # Concerns over the loss of views and sunshine from downtown sidewalks, non-affordable housing in new higher-rise buildings, the complexity of the new rules, and a lack of public participation in the decision-making process highlighted the discussion by the two dissenters.

Those in favor of the new amendments to the city's General Plan cited increased clarity for developers, and more downtown housing and vitality under the new rules.

Tuesday's vote changes the city's Land Use Element from a standard of two or three stories downtown 35 to 50 feet to as high as five or six stories 75 feet when "policy objectives" such as energy efficiency, smaller upstairs dwelling units, or public art are included. Buildings would be stepped back above two or three stories.

Buildings adjacent to the downtown core will now be allowed to be 45 feet tall, rather than 35.

"People don't want an apocalyptic skyline. I'm not supporting the idea," Councilmember Settle thundered before casting his "no" vote.

Councilmember Mulholland suggested a citizen survey before voting on increasing the downtown height limit, saying that the advisory bodies received just three dozen comments, many of them from the same people. She said the council wasn't following its own policy for public participation in changing the General Plan. But Councilmember Paul Brown said citizens didn't show up at the meetings because they "have faith in the decisions we make."

A staff report to the council pointed out various "participation opportunities" that have been available in addition to half a dozen public meetings on the height issue, including meetings of the Downtown Association and Chamber of Commerce, a city web page and e-mail list, a June 2006 cover story in New Times, and ads and articles in the Tribune.

SLO resident Terry Mohan also called for more public input, adding, "There's been a great deal already from architects, builders, those with something to gain from increasing building height. Don't pass this now. There's no rush. Give the citizens a chance for input."

Thumbing through a thick stack of paper, Mulholland decried the new wording in the General Plan, which eliminates references to protecting views of surrounding hills from downtown sidewalks and streets.

"Views will be lost at the street level for residents and shoppers. Views will become features for high-end condos and upscale hotels. We're giving away an important public resource, without public involvement," Mulholland said.

The staff report stated that views of the hills will still be available down side streets and at the edges of downtown, as well as from viewing decks on new taller buildings and publicly owned places such as Mission Plaza.

The possibility of increased housing downtown was cited as a benefit of the new rules. The city's Housing Element requires all new downtown projects to include housing, if feasible.

"We'll now have the chance to get housing downtown," said Mayor Dave Romero, adding, "It won't be 'affordable.' It's too costly downtown."

Mulholland referred to a study by the city's economic consultant, Allen Kotin, which said that an important component for successful downtowns is large-scale rental housing suitable for downtown employees.

The council also approved a new standard for calculating the allowed overall bulk of buildings. Basements and parking garages will no longer be a factor in the equation. The staff said a "thorough analysis" will be done on the need for a new ladder truck for city firefighters, with a fee program that will "properly assign costs."