Read, you fiends, and think fondly of Ray Bradbury and Maurice Sendak

From a poodle with a person problem, to bloodthirsty writers plotting their revenge against editors, to an unrepentant sinner presumably standing at heaven’s gate, New Times is celebrating the 25th anniversary of our annual 55 Fiction competition with wit, cynicism, whimsy, and style.

In keeping with our tradition of paying tribute to the memory of a recently deceased author, we dedicate this edition of 55 Fiction to Ray Bradbury, an author who believed, without limits, in the value of books. And also to Maurice Sendak, that wildest of beasts—an author who raged against the trappings of normalcy and left us all a little bit wiser for it. Do not go gentle into that good night, madmen and provocateurs, rage, rage, against the dying of the light. 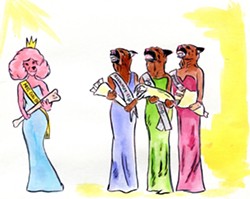 It was humiliating, this get-up. The sequin-studded frilly skirt was bad enough, but a tiara? She was the laughingstock of the park! They teased and taunted from a distance but no one would come near her. Even off the leash she was a bejeweled alien, set a world apart by her tinfoil crown.

No two writers agree about how best to cook an editor.

But the biggest dissension is finding a complementary wine.

I favor anything over 80 proof.

Andy liked fart jokes, which Elliot found repugnant. And his eyes were brown, which wasn’t a huge problem, but not ideal. He called her “baby,” which was crass.

But dating was difficult in a small town, and he was the only man she’d ever known who danced spastically in the kitchen to no music whatsoever.

Mark writhed before the ER nurse injected him with morphine. Once the narcotic entered the brain, his neck burned and curled back. He wondered if this was normal or a bad reaction. Soon enough, the drug rendered him blithe. Mark closed his eyes and listened to the woman next door complain of a squirrel bite.

Boubacar stood silent, an onyx sculpture adorning the vestibule. His humanity confirmed only by the briefest nod as dropped pennies clink-clanked in the brass kettle dangling from the Senegambian’s arm. In Africa, his ability to read and speak many languages garnered respect and position. In this land, he awaited clanging confirmation of alms, inert.

People either understand the significance of pie or they don’t. Which is why I petitioned Match.com to classify people according to pie preference rather than gender. I’ve always identified more strongly as a lover of lemon meringue than as a woman anyway. After little consideration, they refused. Now I troll Marie Callender’s for dates.

I’ve finally made peace with the monsters under my bed. It took 30 years, culminating in a decade-long landmine campaign. They retaliated by relocating to my shower—I smelled a bit ripe for a few weeks. But we’ve struck a compromise. I moved into a bigger house, and they get the guest bedroom.

Miles to Go Before I Sleep

Christmas again; I watch you pour the wine in large gestures, as if it were viscous. You like to think you’re fancy. I think of how you will also use your large gestures later tonight, once we are alone. I smile and put my keys in the fish bowl. The woods are lovely, dark and deep. 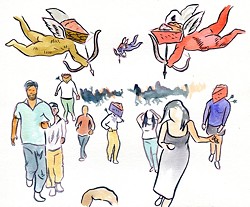 Emily spent the first year after the attack drunk, and the next ten becoming an anesthesiologist, removing everyone’s pain but her own.

That morning, at work, she’d recognized his voice, his tattoo. He’d joked with her, unaware.

Now, removing her mask—she whispered something. His eyes widened.

The surgeon’s back was turned.

THWOMP! Roy looked up from his phone to see a dent in his hood and a woman unconscious in front of his car. He thought of the consequences, which would likely include jail. He pondered what to do while a random car sped past. He blared his siren, flashed the lights, and chased after it.

The scent of almonds was in the air, and sweat. Not regular sweat like after someone took a shower that morning and then worked hard. No, this was old sweat, like sweat over sweat over sweat. Roadie kind of sweat. Sweat from a body sustained by beer and fast food.

I hate being a clown.

Frantically clicking her heels, she cursed Glenda. All remaining hope faded with the distant balloon. The horse of another color flowed red now, as red as her slippers. A futile ax lay beneath a pile of twisted metal. And the straw, the straw was everywhere. Courage it seems, only served to intensify the lion’s appetite.

It’s a terrible thing, being a city planner. You review, carefully, considerately, sidewalks and trash cans. You battle the trolls, politely, professionally. They hate everything. For them, there is no perfect government project. And then, the final indignity, all your work is upstaged by an alley filled with bubblegum by day, and urine by night.

He picked his dignity up off the floor, piece by piece, and shoved it into his lined pockets. She watched this coldly; her eyes followed him as he made for the door. “You forgot something,” she said, pointing at the roses. Dutifully, he came back to retrieve the heart-shaped vase before continuing on his way.

Madame Rand is a real bitch, no getting around it. Yesterday, she ate Jamie’s bunny. She wasn’t hungry, just said she didn’t like the way it looked at her. In honor of Sir Bunnytail, I ordered a rabbit suit on Amazon. I intend to hop, twitching my nose and tail, until Madame Rand begs forgiveness.

The Accident on North Tryon

The blue lights of the police car blink against the setting sun, and Rhea curses the jam on North Tryon.

At home she slips into a lilac dress and lights up the candles. As the chicken marsala simmers, she calls up Dave. A police officer answers. She grasps the words, accident, Tryon, and University Hospital.

Don’t take this the wrong way, but I really don’t like you very much. You’re average in every way, and I need someone better. Anyone better. So it’s change, or you’re out of here. This is how I begin my day, every day. Too bad the mirror me doesn’t talk back.

Things Only My Akita Witnesses

There’s something to be said for leaping—dizzily. For reaching—awkwardly. For kicking my right leg out and whirling chubbily through the air while my akita huddles on the floor awaiting my return to Earth. It’s a short journey. I am, after all, German and we are a stocky, unexpressive people.

Maybe if you were that hot Brazilian, or last Friday's waiter. But it is 1 a.m., and you've just reminded me what an ass you can be. Rain check.

Her dad gave her a cheeky smile and said, “I’ll give you a dollar if you eat that pepper.” She looked at the daunting red chili, the color of fire trucks, and then back to her dad’s face. She agreed, knowing ice cream makes everything better.

Dorothy died the day American Idol crowned its 12th winner. She’d volunteered at a soup kitchen for 23 years, and patrons agreed the soup had improved considerably during that time. (She was liberal with the pepper, and easy on the eyes.) People decried Simon Cowell’s cruelty, the loser’s tragedy. Meanwhile, Dorothy’s cat ate her face.

His first impression of her was love at first sight. Him casually walking down a bustling sidewalk, her posing in a display window, perfectly proportioned and plastic. Tonight he would smash the glass window of her cage and rescue his princess. Tonight her plastic skin would be warmed by his Prince Charming touch.

The fluorescent light of the laundry-mat made her head ache with a dull throb. Tiredly she wheeled bundles of clothes over the dirty tiled floor. The crow’s feet around her eyes creased happily as she emptied the contents of the ashtray from outside into all four of the machines. One dirty turn deserves another.

As the photo technician shuffled through a recent batch of prints, his eyes fell hungrily on a familiar face. Glancing quickly over his shoulder, he leaned down and slowly licked the width of the glossy surface. He then tucked it safely into his breast pocket, another jewel to add to his collection.

Don’t Get Me Started on Play-Doh

Preschool isn’t all it’s cracked up to be. I’m an insomniac so naptime is boring as shit. Second, the principles of sharing go against capitalism. Lastly, I will shank the next bitch who tries to make me color inside the lines, even if I have to use those dull-ass scissors to do it.

If Life Came with a Remote Control

“Tough luck, shithead, the world’s not fair,” my mother told me for the 117th time.

She’s right. But rather than have kids of my own and pass along the wisdom of “tough luck, shithead, the world’s not fair” I opted to write books. My worlds might not be fair, but the parental figures are mute.