Skeletons in the outdoors

Studios on the Park artists strip off their makeup, but keep the clothes 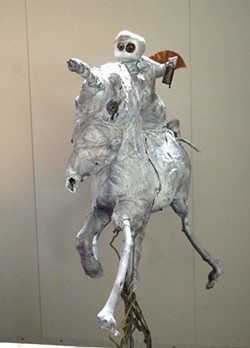 Two months before the opening reception for “Who do we think we are?” an enticing rumor was circulating in the local arts community: The respectable artists of Studios on the Park intended to discard their clothes and create nude self-portraits for the exhibit, which runs Sept. 16 through Oct. 17.

A visit to Studios on the Park a week before the reception revealed only a fully clothed team of artists at work on projects in various stages of completion.

“We were gonna get nude, but we’re too old,” said Anne Laddon, founder of Studios on the Park and a resident painter. “Our artists, they thought it was a great idea at the meeting, and then they kind of back-pedaled. But you see, the pictures, they’re pretty courageous.”

The pictures Laddon refers to were taken by studio artist Tom Peck, who is both a photographer and ceramicist. The photographer captured gritty, head-on portraits of more than two-dozen participating artists. Peck’s subjects weren’t allowed to wear make-up or smile in the photograph, stripping them of their usual camouflage. These images will be paired with the artists’ own self-portraits, which vary wildly in medium and style.

According to Sasha Irving, program director for Studios on the Park, from the outset the artists were encouraged to regard the exhibit as an opportunity to work with new materials and experiment with a new style. Many took this advice to heart.

For her part, Laddon created a portrait titled “Inside the Lines,” inspired by paint-by-numbers kits for children.

“’Cause I don’t,” Laddon said, explaining the concept, which drove her crazy during the painting process. “I on purpose like to stay outside the lines.”

Laddon started by taking a photograph of herself and reducing it to its most basic shapes and colors. Her working method afforded her little opportunity for the brushwork she so enjoys when painting other subjects—livestock being among her favorite muses. She points out, playfully, that her portrait only addresses the surface of her subject. Anyone interested in delving deeper will have to visit the studios and get to know the artist behind the work.

If there were a prize for the most unlikely self-portrait, it would likely go to Jeanette Wolff, who typically works in oil, watercolor, and collage. Though the multimedia painter was absent during a studio visit, in her place stood a 4-foot-6 unicorn, not unlike an old-fashioned carousel horse. A figure peering over the unicorn’s head from its back is equipped with wings and a bell. The title is “The Good Ride,” and Wolff constructed it from mixed plastic, paper mâché, chicken wire, metal washers, metal pipe, driftwood, cork, plaster, and paint.

“That girl has chutzpah,” Laddon said. And when asked if she had been expecting a sculpted unicorn, Irving laughed out an articulate “No!”

“My intention is to never finish it and have it be changing slightly throughout the show,” Winkler revealed via e-mail. “A continual work in progress. Such is life.”

Next door, WB Eckert’s self-portrait—a skeleton, still in progress—towers over visitors. The tentative title is “More or Less Than it Appears.” Eckert’s stylistic approach was classical, with a dark background reminiscent of Renaissance portraits. The artist is 6-foot-1, and so is his skeleton.

“It’s just kind of bare bones without any frills at all,” Eckert said. “It’s the mechanical part of us. I wanted something just very raw, very unadorned, the kind of thing people don’t like to put in the family album.”

Crows gather at the skeleton’s feet. Eckert plans to blindfold them, a comment on their mythological reputation as watchers. 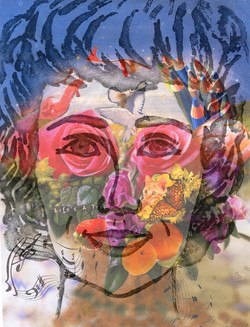 The painter shares his studio with two other artists and says he began hanging around Studios on the Park as soon as the collective opened to the public. He was “starved” for the creatively charged environment.

As to whether a self-portrait is more revealing than any other work, Eckert doesn’t think so. For him, any art speaks to the personality of its creator.

Anyone who’s doing a work of art is pretty ballsy,” he said.

Franscioni discovered the medium five years ago in a gallery, took a workshop in encaustics, and never looked back. Before that, she layered her photographs with other stuff, such as found objects and paint.

The encaustic artist shares Eckert’s attitude toward self-portraits. Her own is an expression of her character, but then so is the rest of her work.

“The artwork itself is not different, because a lot of my artwork comes from a real internal place,” she explained.

The studio in which Franscioni works has a dreamlike quality, partially derived from the transparency of the encaustics and the warm colors that dominate her artwork. When Franscioni gently rubs her canvases with a small cloth, the canvas seems to come to life. Franscioni calls this effect, caused by shining the wax, “blooming.”

Across the hall, watercolorist and Guild of Printmakers member Helen Davie was hard at work, though not on her self-portrait. That had long since been completed—for another show altogether.

“We believe in recycling,” Davie said of her re-appropriated painting, done in watercolor crayon. The face that looks out of her canvas has slanted green eyes with large black pupils and unnaturally pointed ears. Fittingly, it’s titled On My Way to Becoming a Cat.

Davie owns four cats—or perhaps is owned by four cats. She spends so much time with them that she remarked she was beginning to feel like a cat herself.

The printmakers are among the newer artists at the studio, and Davie shares her space with several others who work in the medium. The artist has a studio at home, but joked that when she tries to work there somehow her laundry becomes “fascinating.” But at her shared studio, she finds it easier to tap into the creative atmosphere.

When questioned about the bravery of producing a self-portrait, Davie responded in much the same manner as Eckert and Franscioni: “I didn’t feel that I was exposing anything that was like a hidden secret. People that know me, they know about my cats.”

Managing Editor Ashley Schwellenbach is a cat lady, has a skeleton, paints by numbers, and rides the good ride. Send comments to aschwellenbach@newtimesslo.com.