The cow’s skull felt dry from basking in the warm sunshine, and free of any pesky flesh or fur. It just sat there waiting along the side of the freeway. It was perfect, so he snatched it up and took it home to add to the collection. 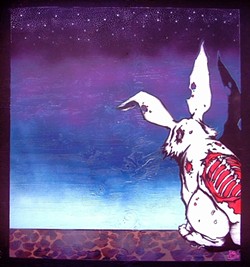 Road kill. It’s an ugly phrase and an even uglier visual. Seeing that glossy-eyed Bambi lying spread eagle (as we swerve to avoid hitting it) on the drive to work early in the morning is an unpleasant reminder that death lurks everywhere, and it most likely won’t be pretty. But Atascadero-based artist Silas Corley doesn’t see it that way. You can find him scanning the sides of local roads or beaches for the newest skeletal friend to whom he can give a second life as an art installation.

“By embracing this type of medium, with the macabre and the skulls, I feel like I’ve got a more sobering and realistic approach to death,” Corley said. “It allows me to appreciate life more.”

He didn’t start out trolling for remains of the dead, though. Like most artists, Corley (now in his late 20s) was once a kid who liked to draw, and also a kid who liked to skateboard. It was common to see Corley’s various broken limbs encased in casts growing up. And nothing brings home the point of “hmm, I might not be immortal,” like your flailing body hitting the concrete repeatedly over the years. Corley said he has no regrets, though, because skate culture has forever changed his life and art. 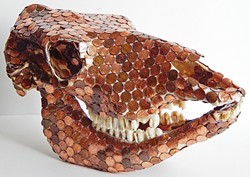 “It gives you an eclectic point of view,” Corley said. “Only skaters would be looking for drainage ditches or going into sewer tunnels. Normally, you wouldn’t find yourself in those circumstances, unless you’re skating.”

In middle school, Corley couldn’t bring himself to use his favorite sticker; it was for the skate brand Black Label, and it featured an elephant with a martini.

“I didn’t want to use it because I liked it so much, and once you stick it on something, it’s done,” Corley said. “I thought, ‘If I could make a way to use this over and over again, that would be cool.’”

So he made a stencil of that sticker, and years later, he’s still hand cutting and spraying his own stencils. A-Town Park skateboarders catch air over a decapitated zombie head with its tongue out, a decaying rabbit, and even Calvin and Hobbes—all stenciled and spray-painted—on the sides of various ramps. Corley’s work is reminiscent of graffiti: an element of roughness and a nod to the grim nature of life, made light with bright, happy colors. He also hand painted the giant A-Town logo in black featuring a “T” going through an “A” with an orange background. 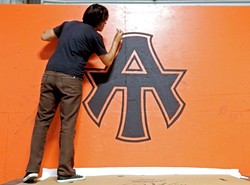 Skateboarding led to stenciling, which led to a fascination about the line between life and death, which led Corley to scavenge for spare bones. One recent creation started out as an abandoned cow’s skull. He finds it best to make sure there’s no meat or hide left on the animal when selecting his next piece. Then, the skull sits in hydrogen peroxide for several weeks to kill all the bad germs. It dries out in the sun before it’s ready to become a canvas. Once the skull or skeleton is clean and dry, Corley applies a sticky resin, which gives him about 30 minutes to work before everything dries. One such creation, a cow’s skull covered in pennies, was inspired by cheap fast-food burgers.

“It’s speaking to the bigger issue of cheap fast food, like McDonald’s value meals,” Corley said. “The No. 1 cause of deforestation in South America is clear-cutting for cattle and soybeans. It’s just raising awareness of mass consumption of meat; there is a price to pay somewhere.”

For Corley, it’s all intrinsically connected. While we may be getting a cheap lunch now, in the future there are consequences. Think of it like a very delayed see-saw effect.

“We have to face our mortality and the mortality of this planet and the continuation of mass consumerism; it’s just not working,” Corley said. “What I’ve found is people are waiting for someone to do it for them.”

Ryah Cooley is pondering her own mortality at rcooley@newtimesslo.com.