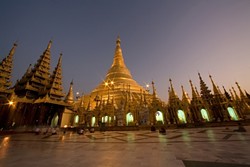 When visiting a foreign country, local photographer Sky Bergman believes, you should always know how to say hello, thank you, and goodbye in the local language.

It’s not accuracy that matters, she explained. Over the course of her two trips to Burma—also known as Myanmar—she just went for it: “I know I massacred it every time, because I would say it and people would just start laughing.”

But the sincerity of Bergman’s meager linguistic efforts was well received by the Burmese, whom she found to be “the most open people I’ve met anywhere ... very inquisitive and very generous.” The photographer’s emphasis on engagement on a personal level is reflected in the stunning body of images she brought back to the Central Coast, currently on display at ARTS Space Obispo in the SLO Creamery.

“I don’t typically take my camera out until I’ve spent time with people and talked to them for a while,” said the artist, who serves as chair of Cal Poly’s Department of Art and Design. Referencing an image of a radiant young monk, she added, “You can’t get that kind of image without some sense of trust.”

Children in Burma often become nuns or monks for a short period of time, she explained. Not only is this considered a great honor, but the move takes some financial strain off the child’s parents: Young monks or nuns are well taken care of.

With the help of her translator and guide, a Burmese man in his 50s named Charlie, Bergman made two trips of a dozen days each to the Southeast Asian country. The photographer generally favored the beauty and simplicity of the countryside, with the exception of cities such as Rangoon (or Yangon) where her lens zoomed in on the glittering, circular Shwedagon Pagoda, visible from any point in the ancient city.

Preferring to capture countries in a time of cultural and economic transition, Bergman was drawn to the irony of Burma, where, she said, “It’s a very interesting contrast, because you have some cities where there are very wealthy people who have everything, and then you have people who go to a pond to get water.”

Her photography show “Burma (Myanmar)” coincides by chance with the release of Burmese opposition politician and Nobel Peace Prize laureate Aung San Suu Kyi, who’d been living for much of the past two decades under house arrest. Suu Kyi was released on Nov. 13, just missing Burma’s first elections in 20 years. Suu Kyi was still a political prisoner during Bergman’s last visit in the early summer of 2009. Suu Kyi was arrested for violating the terms of her house arrest when an American man, later claiming he was spurred on by a divine vision, swam across the Inya Lake to Suu Kyi’s home, warning her of an impending terrorist attack.

Bergman happened to be in Burma during the trespass incident, for which Suu Kyi, who allowed the man to stay at her home and recover, was originally sentenced to imprisonment for three more years. (The intruder, John Yettaw, suffered no consequences other than deportation.)

These events would be nothing more than coincidental had they not sparked conversation between Bergman and her guide, Charlie.

“I would ask him a lot of questions, and he was pretty open about his responses,” she said. “One thing that he said was, ‘Every government has its corruption; ours is just a little bit more open about the corruption than some other governments.’”

But the photographer’s primary interest has always been in the daily rituals of everyday people: children taking wooden boats to school, an older man making thread from a lotus plant (“It’s a beautiful process. That guy, all he does all day is sit there and roll it and snap it.”), the Burmese grandmother who wouldn’t let Bergman get away without sharing some of her roasted peanuts.

“It was incredible that people who have the least are the most giving people,” Bergman said.

And of all the people she photographs, Bergman tends to gravitate toward the very old and the very young: those with little say in the country’s political scene. Her connection with the elderly, she said, stems from her close relationship with her grandmother; her affinity for kids is simply because “they have that little sparkle.”

Bergman said part of her artist’s talk at ARTS Space Obispo on Dec. 2 will be about the political aspect, but she also wants to talk about the people on a more human scale.

“I found places in Burma to be very spiritual,” she said. “I mean, walking around the Shwedagon Pagoda, you can’t help but feel very moved. It’s such a humbling place to be.”

Arts Editor Anna Weltner is humbled in the face of the Fremont Theater. Send comments to aweltner@newtimesslo.com.