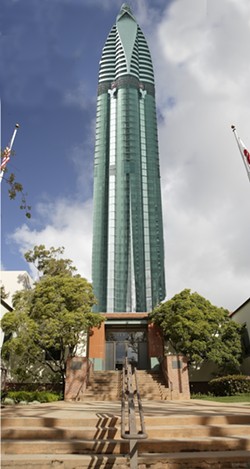 Citing the need for more vertical and holistic development downtown, the SLO City Council approved a new development, which, if built, will consist of a single cylindrically shaped skyscraper set to soar 128 stories above the ground.

“This will solve all the city’s and county’s development problems,” said Jurgen Schwanz, spokesman for IG Grobe, the project’s developers. “This building is self-sustainable, has all its parking on site, and will bring up to 10 new big-box businesses to the county.”

The edifice will be the county’s only skyscraper. Tentatively titled the Grosseschaft, by the German-Austrian consortium developing the project, the building will be erected directly over city hall.

“This will be the greatest thing to ever happen to this town,” said Richard Ding, a spokesmen for the governor. “This will bring unparalleled prosperity to Central California, as well as one of the tallest buildings in the world here. I can’t think of a more appropriate place to put a humongous, giant skyscraper.”

City staff said the building sidestepped many of the problems that usually come along with big developments. The building will have a basement parking area that will add more than 4,000 parking spaces to the city’s limited stock. Unfortunately, only 32 spaces will be available to the public.

No historic structures will be impacted by the erection of the edifice—the city hall will reside directly below the skyscraper—and all future developments will fit into the new project.

City planners were initially reluctant to have a 2,073-foot building in downtown San Luis Obispo, but after careful study of the project’s plans, the entire city staff now supports the project.

“This is the greenest giant building in the world,” said Joe Bauunternehmer, a city environmental official. “The solar panels built on the side of this building will not only provide power for itself, but also give power to the town. How could we say no to something so green?”

The financing of the project came easily because cell phone companies will pay to utilize the tower at the tip of the structure. The tower will provide cell phone reception for most phone calls made between Los Angeles and San Francisco.

The National Security Agency has also expressed interest in offices on the top floor.