by Angela Watkins and Jen Ingan

It's the latest stuffed animal craze, developed by a mother who was tired of finding stuffed animals lying around her child's room. Jennifer Telfer came up with an idea to convert a traditional stuffed animal into a functional pillow, and called the result "My Pillow Pets." The creation starts off as a stuffed animal, but open its belly, and it becomes a pillow.

Anita's Pillow Pets in San Luis Obispo, in affiliation with "My Pillow Pets," is the first shop in the United States to sell these hybrid stuffed animals/pillows, according to owner Anita Halcyon. She first opened her doors on April 1, but hosted a grand opening celebration the weekend of April 19 and 20. 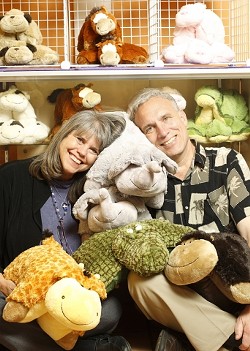 "People just love it, and we've been very successful at fairs and festivals," she said.

Prior to opening her shop in San Luis Obispo, Halcyon sold Pillow Pets at large festivals and fairs around the Denver, Colo., metro area. Originally from San Diego, Halcyon moved to San Luis Obispo County two months ago to be closer to relatives. She came with her husband, Dave Karpowicz.

"[Pillow Pets] are great for traveling and for all ages, from babies to the elderly," Halcyon said.

She also said that she hopes to partner with local nonprofit organizations, such as the Children's Museum in San Luis Obispo, to help support the community.

A large Pillow Pet costs $30, a small is $20. For the month of April, Anita's Pillow Pets is offering a special $5 off the large and small Pillow Pets, or two large ones for $40.

This week's Strokes and Plugs was compiled by interns Jen Ingan and Angela Watkins. Send your business news to strokes@newtimesslo.com.