The San Luis Obispo City Council approved its two-year budget on June 1 and signed off on a new proposed public safety pilot program that will start sending an EMT and social worker to homeless-related 911 calls instead of armed police officers. 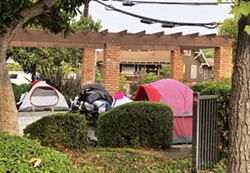 The pair, when hired, will serve as the city's Mobile Crisis Unit, and they will provide "non-emergency response and care to unhoused community members," according to the city. The goal of the two-year pilot program will be to "reduce the emergency dispatching of paramedics and law enforcement to community members who need non-emergency support."

The 2021-23 budget allocates enough funding to hire the EMT in the fire department and the social worker through a local nonprofit contract. The budget also adds a second social worker to serve with the Police Department's Community Action Team (CAT), which has historically sent two police officers and one social worker to homeless-related calls.

Councilmember Andy Pease said that the program is an example of the city responding to calls from the community to "reimagine" public safety in the wake of the Black Lives Matter movement.

"For us this is kind of lightning speed for what a municipality can do," Pease said. "We're absolutely not done."

SLO City Manager Derek Johnson said the program will likely lead to an increase in calls for services for both the Mobile Crisis Unit and the police department, as has been shown in other cities with similar programs.

"Where that takes us long term is something we'll have to monitor and track," Johnson said.

While council members supported the budget, many local activists called in to the meeting to protest it. The callers took issue with a $1.3 million increase to the SLO Police Department's budget and called for a $5 million divestment. Many were concerned that the Mobile Crisis Unit and CAT were too intertwined with law enforcement.

"We do not want CAHOOTS programs [the mobile crisis unit]," said resident Kat Shroeder Mora. "We want mental-health-first programs that don't involve the police. We do not want community policing or [diversity] trainings for the police. We want fewer police—this has been really clear. This budget does not do that."