SLO artist Bryn Forbes' A Light Behind Every Window
exhibit will be on display at the SLO Museum of Art
through Jan. 28. Visit sloma.org for more
information.

At one point, Bryn Forbes was traveling so much for work that he often joked that his address was seat 12F, c/o United Airlines.

On one such trip for his computer-engineering job, Forbes was flying into LAX, and sitting at his preferred window seat watching miles and miles of houses go by. 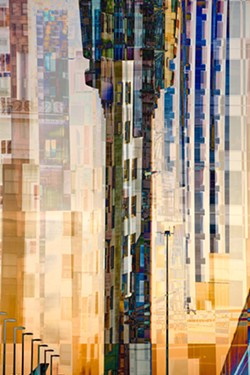 "The perspective is static and sort of textural," the San Luis Obispo native and artist said. "I thought how impossible it is to depict the world as anywhere as complex as it is."

Once at his hotel room, the weary traveler became overwhelmed by feelings of loneliness. Then a light shining through a window caught his eye, and another and another. He wasn't alone, not really.

"I realized there were millions of people around me," Forbes said.

Ever since then the multi-disciplinary artist has been taking photos of and through windows on his quest of "trying to present the modern chaotic cityscapes we live in."

Forbes' colorful, eye-catching, and modern pieces are currently on display at the San Luis Obispo Museum of Art as the A Light Behind Every Window exhibit.

While Forbes is from SLO and currently residing in the area, his tech career took him to the Bay Area and also North Carolina. Later he opened the Bryn Forbes Gallery in the Pearl District of Portland. About two years ago, Forbes came back to SLO to be closer to his family.

"I didn't realize how great it is to be 10 minutes from the beach," Forbes said. "It's a lovely town."

His process starts with finding an element in a photo that intrigues him, like a color or texture. From there, Forbes does some work in Photoshop to give the image the sense of depth or movement that you'd experience flying high in the sky or driving past a series of buildings.

"I've been trying to find ways my art can have beauty or quirkiness," Forbes said. "I feel like the world is getting a little homogenous."

But Forbes is hoping that maybe, just maybe, people who look at his work will see more than just skylines and lights. Perhaps they'll consider the lives happening in and around the settings Forbes depicts.

"It's some small way of creating empathy in the world, getting people to look outside themselves," he said. "The images are a lot about walls that were built that divide us. The chaos might drive people away, but hopefully the details will pull people in and remind them that everyone has a story." Δ

Arts Editor Ryah Cooley is admiring all the pretty lights over at rcooley@newtimesslo.com.