by Ryah Cooley and Camillia Lanham

San Luis Obispo-based author Jay Asher, known best for his young adult novel 13 Reasons Why and the Netflix show of the same name, has been expelled from the Society of Children’s Books Writers and Illustrators (SCBWI) amid accusations of sexual harassment. 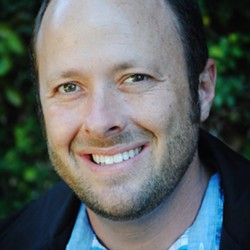 SCBWI announced the decision Monday on its Facebook page and in statements made to the Associated Press after mostly anonymous online comments blew up on a January School Library Journal article, “Children’s publishing reckons with sexual assault in its ranks.” Over the weekend of Feb. 11, those comments called out some prominent male young adult authors including Asher and illustrator David Diaz for using SCBWI conferences and events allegedly to target female authors.

It is unclear exactly why or when Asher was removed from the SCBWI. New Times obtained a formal complaint that was sent to the book writers’ organization and its executive director, Lin Oliver, in spring of 2017 complaining of Asher’s conduct. Several anonymous female authors who said they all had affairs with Asher signed the letter.

“This letter’s purpose is not one of vengeance, but rather to make the leadership aware of how Mr. Asher is using SCBWI to lure women into friendships and then affairs,” the letter states. “Mr. Asher speaks around the country about mental health and treating people with respect and kindness, yet continues to regularly destroy the mental health of many women, and he has taken advantage of women who are themselves depressed. … We simply would like SCBWI to be aware of what has happened over the last seven years and do something to prevent it from happening to other SCBWI women/authors/agents.”

Oliver and the organization responded to the complaint by saying that it took the allegations seriously and had a formal sexual harassment policy.

“Both Jay Asher and David Diaz were found to have violated the SCBWI code of conduct in regard to harassment,” Oliver said. “Claims against them were investigated and, as a result, they are no longer members and neither will be appearing at any SCBWI events in the future.”

While Asher declined to speak directly with New Times, his spokesperson, Tamara Taylor, said that Asher was not banned from the SCBWI and is a current member of the organization. She called Oliver’s statements to the Associated Press “completely false,” and said that Asher voluntarily agreed to stop attending the organization’s conferences in 2017 as a response “to many years of harassment from a group of authors with whom he had consensual relationships that ended with some hurt feelings when they learned about each other.”

Taylor also claimed that Oliver told Asher to keep his membership going in 2017 after he let it lapse.

“I’m asking you to please STOP with the projection of your poor choices and actions onto your victims,” Porinchak wrote. “What you did was not harassment. It was worse. … It’s ironic that you’ve taken your anti-bullying stance and used it to shield yourself from being accused.” ∆