Earlier this year when Diablo Canyon announced it would be shut down by 2025, environmentalists across the Central Coast breathed a sigh of relief. Still others, like local author Tod Rafferty wondered what effects the nuclear power plant, along with other environmental sins, could have already had on our local wildlife. What if, maybe just maybe there was a giant clam lurking in our waters? … So begins the premise for the recently released novel The Pismo Calamity. 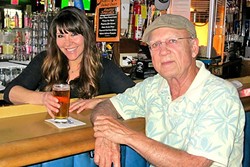 New Times: So what is The Pismo Calamity all about?

Tod Rafferty: I call it an environmental thriller. The center of action is Harry’s Bar in Pismo Beach. This character Dugan Byrnes, who’s the narrator, he’s sort of a beach bum/history buff. These strange reports start coming in about something in the ocean. So he gets interested in finding out what’s going on and enlists the aid of a journalist, and a young woman who [works in the] lab at the Cal Poly pier. It’s a mystery novel, but with an environmental message. The premise is that electromagnetic radiation can modify the DNA of animals and humans. So this clam is subject to the warming of the ocean water and grows to be 60 feet in diameter and gets angry about what’s going on in the ocean and decides to take her revenge on humans.

NT: What inspired you to write this book?

TR: I have to give credit to Mike McCarthy, who came up with the giant clam idea. We worked on another book about 12 years ago; he’s a car dealer here in town. He said, “I’ve got a bet with these guys that some day someone will write a book about a giant clam that appears in the water at Pismo Beach.” The more I thought about it, the more fun I thought it would be. That was about 10 years ago. Donald Trump was just a gift. He’s referred to a lot by different names.

NT: What message do you hope readers take from the story?

TR: Just to be more conscious of environmental problems. One of the things I came across in doing my research was that there’s stuff called atrazine and it’s pretty common in pesticides that they spray on fields to keep the bugs off. One of its effects is that it changes the metabolism of frogs by turning testosterone into estrogen. Male frogs are having babies. That’s kind of the warning sign that things are going wrong. If that’s happening to frogs it’s getting in the ground water, it’s getting in our food, in our bodies and we are becoming mutations. And the leading mutation is Donald Trump.

NT: Is Diablo Canyon featured in the book?

TR: It is. The radiation and the fact that that plant sucks in 2.5 billion gallons of water every day and returns it to the ocean 20 degrees warmer, so you can’t do that forever without having some kind of event. I just had time at the end of the book to add in that the plant is closing.

NT: How does Donald Trump figure into the story?

TR: Well the center of action is Harry’s, and a TV is always on with the sound off. And there’s a group of people who are regulars there and they call themselves the shrubbies after George W. Bush and one of Bush’s favorite things is to give people nicknames, so they give these people they see on the TV nicknames, and it’s kind of like a contest to see who can come up with the most clever ones. Trump has a whole bunch of them there. The marmalade mouth-breather is my favorite. I didn’t get real profane with any of them, I would have liked to. Newt Gengrich is Porkie the Smirk. It’s sort of a running gag through the story.

TR: I’m not very disciplined. I’ve been a motorcycle journalist for most of my career. I haven’t written much long form; I’ve written a lot of short stories. I’m pretty good with dialogue, but I’ve never thought I was a great storyteller. But once you develop the characters they start to tell the story. It’s an organic thing. I’ve been working on The Pismo Calamity off and oan for 10 years.

NT: Who would this book appeal to?

TR: I like to say that I wrote this book at a 10th grade level. By that I mean when I was in the 10th grade, so by now it would probably appeal to literate fifth graders. It’s sort of a general interest book. If the story is engaging enough, I think most people will like it. I wouldn’t pigeon-hole an audience for it.

Ryah Cooley prefers her clams to be normal sized and non-radioactive at rcooley@newtimesslo.com.