SLO bikes get blessed at Salon 544! 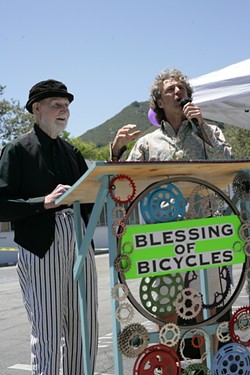 It’s Sunday, May 18, and my wife, Anna, and I are peddling against a breeze to get to Salon 544, at 544 Higuera, where owner Sherry Jiminez has organized the inaugural SLO Blessing of the Bicycles as part of Bike Month.

I’m not too sweaty by the time we arrive, and it doesn’t matter anyway as Sherry greets us with some tasty chai-flavored beer from Central Coast Brewing. Bikes are rolling into the parking lot and lining up in extra bike racks brought in for the occasion.

There’s Sherry’s daughter Sevryn, who I see almost daily when she peddles up Madonna Road on her way to the junior high as I walk my dogs home from the dog park.

“Got a profound quote about bikes?” I ask.

“What’s the weirdest thing you ever saw while biking?” I ask. 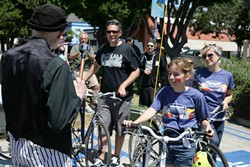 “A dead deer in the bike lane,” Sevryn says.

“I know! I was there,” I say before Sevryn runs off and climbs the big tree in front of her mom’s salon.

There’re about 40 people here, and about 25 have brought bikes to be blessed. I’m watching a group of jugglers give free lessons when I meet the holy man himself, Mr. Robert Norton, who’s looking sharp in white and black striped pants, checkered Vans, a black shirt, black vest, and extra pious black cap. Sherry’s husband, Mario, has made Robert an aspergillum to sprinkle holy water on the bikes. It’s really just a showerhead on a stick sitting in a cup of water, but it will do.

Mario gets up and says a few words, recalling his childhood Schwinn Stingray and explaining how everyone looks at bikes differently. “I saw my Stingray as a motorcycle, but my mom saw it as multiple trips to the emergency room. Just love what you ride and ride where you love. Now I’d like to introduce Mark Grayson. If bicycles were a religion, Mark would be considered one of the most faithful.”

Mark “Gizmo” Grayson, the guy who basically invented the weekly Thursday night bike happenings in SLO Town, is the official Master of Ceremonies, and takes the microphone and starts waxing nostalgic about the connection we have with our bikes.

“If you’ve ever had your bike stolen, you know it’s not about the money to replace the bike. It’s about that bike. How many of you have names for your bikes?” he asks. “It’s the ‘sparkly pony’ or whatever. We grow to love our bikes.”

The he calls Robert up to the podium.

“How do you make holy water?” Gizmo asks.

“You bless the Hell out of it,” Robert quips. “Whoever invented the wheel realized it was a good idea, so he made two of ’em, and the bike was born.”

Then folks lined up and walked their bikes past Robert, and over each one he said some encouraging words, sprinkled some holy water, and sent them on their way.

I rolled my bike, Elvis, before him, and he blessed it, and I thought warmly about the question I asked him earlier when we first met: “Is there some kind of guarantee that I won’t have a bike accident?”

“From what I’ve gathered from your writing and your attitude, it would be very much an aberration. If I put a blessing on your bike, it’s a powerful thing.”