Find SLO Cider Company online at slociderco.com and @slocider on Instagram and Facebook. The San Luis Obispo tasting room at 3419 Roberto Court, suite C, is open Tuesday and Wednesday from 4 to 7 p.m., Thursday and Friday from 2 to 7 p.m., and Saturday and Sunday from noon to 7 p.m. Or head to the Paso Market Walk tasting room, 1803 Spring St. in Paso Robles, from noon to 5:30 p.m. Thursday through Sunday.

One year after the state of California issued stay-at-home orders hoping to stem the spread of the COVID-19 pandemic, SLO Cider Company celebrated its first anniversary—a year of unanticipated success.

"Nobody knew the magnitude of what we were facing," Fleming said. "We felt we were ready. We didn't think the pandemic was going to be as big of a deal as it turned out to be."

For two years prior to opening, Fleming and his partners in cider, Marketing Director Pete Ayer and Operations Manager Nate Adamski, worked on cider labels, cider flavors, and tenant improvements on their building. So they went ahead and opened the cidery's doors, not realizing how short-lived their tasting room experience would actually be.

For most fledgling adult beverage makers—wineries, breweries, cideries, even distilleries—the tasting room is clutch. It's where they build their brand and their following. Selling a glass of cider directly to the consumer out of a tasting room yields a higher profit for the maker than selling a keg of cider to a restaurant establishment, which then sells a glass of cider to a consumer at a similar price point.

Tasting rooms are where customers can learn about what they're drinking from the people who are crafting it. As tasting room business grows, adult beverage makers often expand into selling to restaurants and bars. Then, as that demand starts to increase, some—not all—take the step of bottling or canning their products and moving onto retail store shelves. 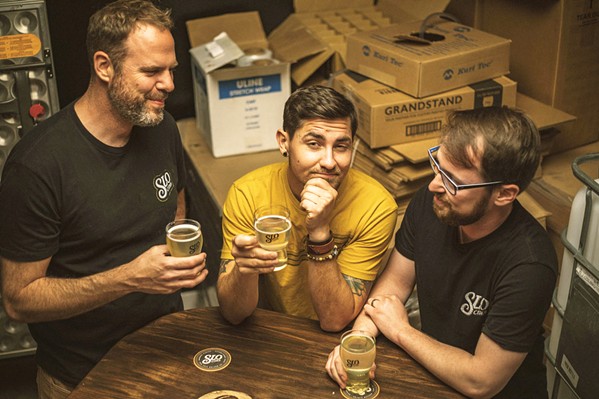 Since SLO Cider no longer had a tasting room, the cidery was forced to pivot, forced to figure out how to get their legs underneath them and their product into people's hands. Fleming said they turned to canning, building a canning line in the cidery and focusing on the sales side of things.

SLO Cider now has more than 120 accounts on the Central Coast.

"That was actually a really, really good decision," Fleming said. "I don't think we would have been able to do that without being forced to take that pivot up front."

Canning four to start with—dry, hopped, tropical, and rosé—each is made from a blend of apples such as Braeburn, Honeycrisp, Fuji, Gala, and Granny Smith. Apple varieties each bring a different flavor and characteristic to the final product, Fleming said.

"Really a single apple [variety] often doesn't give you a lot of characteristics. It's often one road. So we like to have a little complexity," he said.

Something like a Honeycrisp can add sweetness to a cider, while a Granny Smith is more tart and crisp.

The dry cider is really for those cider connoisseurs out there, Fleming said. It's crisp, clean, and refreshing. The hopped cider is made with Citra hops, which he said could help introduce beer drinkers to cider. Rosé is a little bit lighter and more approachable for some people, Fleming said, with a little bit of raspberry and hibiscus notes.

SLO Cider's tropical cider was inspired by Fleming and Adamski's love for the islands. Both like POG juice: passionfruit, orange, and guava. Fleming has fond memories of Hawaii, while Adamski has family members who lived in Oahu, so they wanted to build a cider that paid homage to that.

Another unanticipated pandemic development happened at the Paso Market Walk, where a SLO Cider opened a second tasting room in November 2020. Totally unplanned, the SLO Cider crew had an opportunity to open a spot in North County, and Fleming said they did what they had to do to make it happen.

With the SLO tasting room now open again, SLO Cider is serving up more than just its flagships. During the anniversary celebration, Fleming put several specialty ciders on tap, including a lemon ginger cider and a blood orange cider—both of which are delicious and of course made with a base of apples. Fleming has a backlog of ciders to choose from, as well, with at least 30 different ciders he developed during the course of working to open the cidery.

"Cider has taken over my life," Fleming, who used to brew at Bang the Drum Brewery, said with a laugh.

Coming from a brewing background, Fleming said, there are quite a few differences and quite a few similarities between making beer and making cider. Cider, he said, is more similar to wine than it is to beer. One of the things that had the steepest learning curve was learning how to work with pectin, a naturally occurring substance in fruits.

"Pectin has been the bane of my cider existence. Not knowing that up front, not really understanding that up front, threw some significant hurdles in my way," Fleming said, adding that he definitely pulled some all-nighters to troubleshoot the additives that cider needs to help break down pectin.

Fruit pectin is the thing that helps jams and jellies go from runny to more viscous or solid. For cider, it is the thing that can create haze in the finished product, because it's insoluble with alcohol. So Fleming had to learn to work with certain enzymes that break down pectin.

The brewer-turned-cider-maker met Adamski at a tasting event in downtown SLO in 2014. Adamski worked for See Canyon Cider Co. at the time, and the two became friends. Fleming started making home batches of cider from the apples off a tree in his backyard, and he happened to bring some to one of Adamski's birthday parties. It was mid-2018 when they decided to give their own cidery a shot.

Ayer came on as the marketing guru—he's worked with Moshpit Digital and done work for everyone from Cal Poly to High Street Deli, Fleming said.

"Really, it is Nate that brought us all together," Fleming said. "Nate had a little bit of experience in the cider industry and decided to take a chance, to build a [cidery] with a couple of guys." Δ

Editor Camillia Lanham is ready for a dry cider, followed by a blood orange one. Send food news to clanham@newtimesslo.com.