On June 16, the SLO City Council passed its hotly contested "clean energy" building code that favors all-electric development over buildings with natural gas, while earlier the same day, the SLO County Board of Supervisors officially walked away from Monterey Bay Community Power. 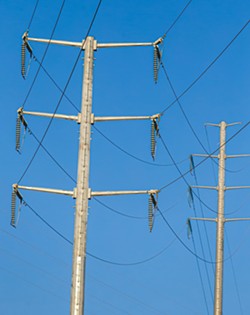 On the flip side, developers who want natural gas in their projects must meet energy efficiency requirements that exceed the usual standards, and those buildings must be pre-wired for an electric retrofit. Builders of new commercial and high-rise residential buildings must also install rooftop solar panels under the new code.

The building initiative is part of the city's push to reach carbon-neutrality by 2035. According to SLO, natural gas accounts for 53 percent of its building-related carbon emissions, and buildings make up for 29 percent of citywide emissions.

The council passed a prior version of the code in September 2019, but that faced numerous challenges, including a complaint from the SoCalGas labor union to the Fair Political Practices Commission. The complaint alleged that Councilmember Andy Pease had a conflict of interest since she owns a local architectural consulting firm.

As the council prepared to take a new vote on the code without Councilmember Pease, the Utility Workers Union of America's regional president, Eric Hofmann, threatened to stage a protest in the city during the COVID-19 pandemic.

"If the city moves forward with another reading on a gas ban I can assure you there will be no distancing in place," Hofmann wrote.

Since its initial adoption in 2019, the city made some revisions to the code in response to stakeholder input. The code no longer charges fees to builders who use natural gas. Those revisions helped earn the support of the SLO Chamber of Commerce and Councilmember Erica Stewart, who'd initially voted against the policy.

"I've seen this policy morph quite a bit. I'm thankful for the incentive focus," Stewart said. "You're not going to lose all gas possibility."

SoCalGas, the Western States Petroleum Association, and the Central Coast Homebuilders' Association all opposed the new code. They argued the requirements would effectively ban natural gas in new buildings and increase housing costs and utility bills.

"With many Californians out of work, families and businesses struggle to get by," SoCalGas spokesperson Tim Mahoney said during the meeting. "It's unclear how this proposal will keep [energy] affordable to working families."

Hours before the city passed its new building code, the SLO County Board of Supervisors voted 3-1 to abandon its exploration of Monterey Bay Community Power (MBCP), which will soon become Central Coast Community Energy as it expands through most of SLO and Santa Barbara counties.

The board reviewed an analysis of MBCP's fiscal outlook, which was positive, before it decided not to join the Community Choice Energy public utility that procures carbon-free energy on behalf of participating residents.

"I still can't get my arms around it," Peschong said.

Compton said MBCP's electric bill savings of $3 per month would merely "buy me a nice dinner at my favorite restaurant."

"It's a new level of government," she said.

SLO County joins Atascadero and Buellton as the only three jurisdictions on the Central Coast that've not become MBCP members.

"In the history of this board making poorly reasoned decisions, I don't think I've ever seen a day where flimsier excuses are used to deny the residents of this county the opportunity for something that's going to benefit them," Gibson said. Δ