The 3-0 vote paves the way for construction to start on the joint project, a public-private partnership between the city and the SLO Repertory Theatre on the corner of Monterey/Palm and Nipomo streets. 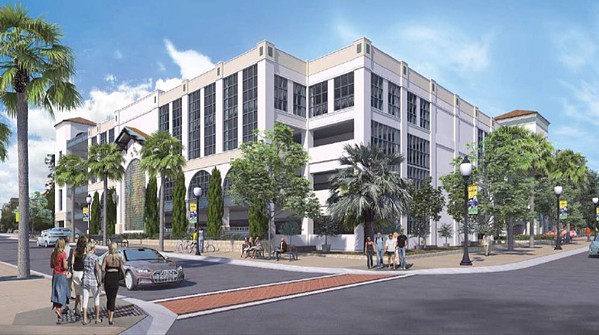 Councilmembers Aaron Gomez and Andy Pease recused themselves from the vote due to their personal businesses' proximity to the site.

SLO Rep is currently raising funds for the $9.5 million new theater, a 23,344-square-foot facility envisioned to hold two performance spaces and a rehearsal space, a lobby, balcony and roof deck, and administrative offices. It would replace SLO Rep's current theater on Morro Street.

"The project before you tonight is the result of eight years of planning and partnership with the city," Kevin Harris, managing artistic director for SLO Rep, told City Council members. "I consider this a thrilling opportunity not only for theater lovers, but for those who have supported our organization for decades and those who enjoy the diverse artistic life of the city."

Harris detailed SLO Rep's growth over the past eight years, transitioning from a community theater to professional theater and roughly doubling its annual budget and number of season subscribers over that time.

He said the new theater is the next step in the nonprofit's evolution. Once completed in roughly four years, he expects it to host 45,000 to 50,000 people per year.

"We are ready to become the only destination regional theater in the county," Harris said.

Simultaneously, the council's Nov. 12 vote allows the city to begin work on its new parking garage just north of the proposed theater, at the intersection of Palm and Nipomo streets. The 50-foot, five-level garage will provide 404 sparking spaces. Projected construction costs weren't available in time for the City Council meeting, according to a city staff report.

During their deliberations, SLO council members said they received hundreds of emails from community members about the projects, mostly expressing support.

"The amount of people that responded with a desire for the SLO Rep [theater] and the parking garage was huge," said Councilmember Erica Stewart.

One community concern about the projects is the loss of a historic adobe house, the Heyd Adobe, at 614 Monterey St., which would be demolished during construction. The council declined a request to allocate funds to relocate the house, but set aside $100,000 to assist any private group that wants to raise money for the cause.Δ