Each candidate for San Luis Obispo City Council sat at separate tables in the SLO Library on Sept. 24, rotating every seven minutes at the sound of a buzzer. At each stop the candidates fielded rapid-fire style questions from constituents at the tables—an exercise one attendee joked felt like speed dating. 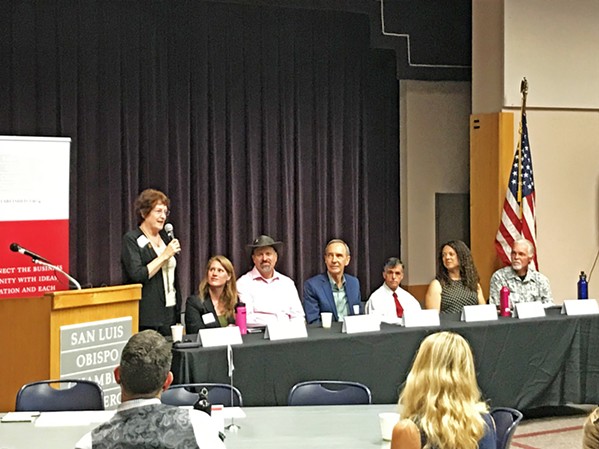 The round robin moved quickly but gave just enough time for the candidates to make their impressions and the roughly 50 residents in attendance to get a flavor of their potential representatives. Seven hopeful city leaders (with one incumbent, Vice Mayor Carlyn Christianson) are vying for two spots on the City Council.

City growth, downtown development, and neighborhood engagement emerged as key themes in the forum, which was hosted by the SLO Chamber of Commerce.

"I see division over things as basic as bike paths," said candidate Sarah Flickinger, a neighborhood activist who last year fought for a settlement with the city to fund more infrastructure near the Avila Ranch housing project. "People don't feel engaged in the process."

In a crowded field, the candidates distinguished themselves by their sentiments toward current city policies and recent decisions by the City Council. Sticking points included the city's head-on approach to building housing, downtown development and building heights, the hotly-debated Anholm neighborhood bike path, pension liabilities, and preparing for the post-Diablo Canyon economy.

Candidates Flickinger, James Lopes, and Bob Voglin voiced the most cautious stances on growth and development. Lopes is a member of Save Our Downtown, a group that "protects and promotes the historical character, design, livability and economic success" of downtown SLO. He's a critic of the city's 75-foot downtown building height code, and has spoken against several recent projects that have come through City Hall.

"I've been kind of an activist," Lopes said. "I'd like to balance job growth and affordable housing [in a way] that doesn't disrupt neighborhoods."

Voglin, a surfer and cancer survivor, similarly voiced opposition to tall downtown buildings and other projects that could jeopardize "the architectural identity we've had forever." The founder of Surfing for Hope, a nonprofit that uses surfing to inspire hope in people fighting cancer, Voglin frequently emphasized the "positive energy" he brings to any group.

"I think that's what I'm bringing to the council," he said.

Jeffrey Specht took the strongest stance against current city leaders and policies. He criticized the city's handling of its pension liabilities ("CalPERS is bankrupting all of California," he said), and said that council members too often defer to city staff's recommendations.

"The will of the people has not been served," Specht said.

Candidates Abe Lincoln and Erica Stewart took more favorable positions toward SLO's current direction. Lincoln, the executive director of the SLO NOOR Foundation, a nonprofit that provides free health care for the uninsured, said he was in favor of continuing to develop downtown.

"I like it," he said. "The reality is we have a lot of change coming in the next five years. I much prefer SLO go up than out."

Lincoln was also vocal in his support for progressive housing policies, including rent control. When it came to affordable housing, he said, "there aren't a lot of things I would object to."

Stewart, the president of the Cal Poly Alumni Association, noted that she'd bring much-needed diversity to the City Council. Stewart emphasized that she's a working mother with kids still in school and is half African-American.

"We need more voices that are different," Stewart said.

Incumbent Christianson stood behind her record, calling her biggest accomplishment the recent approvals of major housing projects like Avila Ranch and San Luis Ranch on the edges of town. She defended the current City Council from criticisms about overdevelopment.

"The resistance is human," she said. "People hate change."

Christianson also spoke to her recent "no" vote on the divisive Anholm bike project, which will create protected bike lanes through a neighborhood at the expense of on-street parking. She said, typically, community members are able to come together to find compromises on such projects, but that it didn't happen in this case.

"It got worse and worse," she said. "That's still very disturbing to me." Δ